The 10-minute meeting happened right before the president's appearance at Idaho’s Boise State University on Wednesday.

Nagmeh wrote about the encounter on the website of the American Center for Law and Justice, the organization that has spearheaded the campaign to bring Saeed back home.

[Obama] again reiterated that Saeed's case was a “top priority” and getting him back to the U.S., to our family, was a top priority. He also said that he meets with Secretary of State Kerry regularly and follows up on Saeed's case. He also said that Secretary Kerry brings up Saeed every time he meets with the Iranians. I told him how appreciative I was that he was willing to meet with my family and for everything he was doing to bring my husband home. I told him that I was praying for him and had been praying for months I would have the opportunity to meet with him. He took my hand, squeezed it, and smiled. I could tell by the look in his eyes he cared.


White House press secretary Josh Earnest confirmed to the Associated Press that Secretary of State John Kerry raised the matter recently with his Iranian counterpart during a meeting in Europe, and that it is also a priority for the president.

Saeed Abedini is serving an eight-year jail sentence after an Iranian court found him guilty of undermining state security by trying to establish a church network. His family believe he’s being targeted for his Christian faith. He’s been detained in Iran since September 2012.

The ACLJ claims Saeed is being abused in prison and that he isn’t receiving proper medical attention. The group has organized vigils across the country to pray for Saeed’s release. 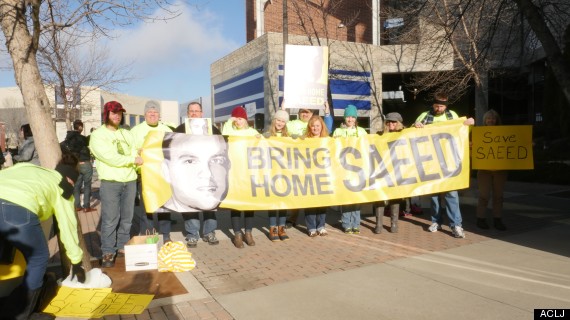