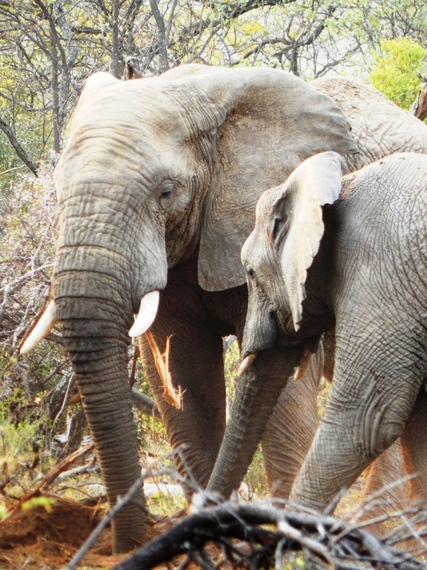 From February 3 through 6, Safari Club International (SCI) will hold its Ultimate Hunters' Market ™ at the Mandalay Bay Convention Center in Las Vegas. SCI is an organization that continues to offer its membership the opportunity to compete with other trophy hunters to earn awards for killing the largest or most types of animals. American trophy hunters cover the globe to track down and slaughter the world's most magnificent animals, from lions to elephants to rhinos to bears -- the rarer, the better.

What SCI won't be telling its membership is that most American's would rather celebrate these animals alive than dead. A recent nationwide poll by HBO Real Sports and Marist Poll showed that 86% of Americans disapprove of big game hunting and 62% favor banning the practice. Progress is being made to protect critically imperiled species from the ills of trophy hunting.

For example, a new federal rule by the U.S. Fish and Wildlife Service (FWS) now mandates that anyone wanting to import lion parts has to first get a permit from the FWS, which will only grant one if it finds that the killing enhances the survival of wild lions. This rule was a long time in coming: According to Humane Society International, in the past decade alone, American trophy hunters have killed 5,647 African lions. In 2014 alone, the trophies of roughly 85% of captive lions from South Africa's notorious canned hunting facilities were imported to the United States.

The ruling followed this summer's global outrage after a Minnesota dentist killed a beloved lion called Cecil in Zimbabwe. Cecil's death resulted in a backlash against trophy hunters, who often stalk and kill their prey in a canned hunt. These canned hunts trap an animal in a small area making it easier for a trophy hunter to hunt down and kill it. According to the Humane Society of the United States, American hunters have killed 5,552 African lions and imported their parts as trophies between 2005 and 2014. In 2014 alone, trophies of 367 captive lions were imported to the United States.

At the SCI's Las Vegas conference, hundreds of trophy hunts will be auctioned off. But before bidding on a hunt, attendees should know that in addition to the ban on bringing lion parts back to the United States, 45 major airlines have banned the transport of some or all types of hunting trophies.

We need to take this a step further and urge the Nevada Department of Tourism and Cultural Affairs to publicly oppose Las Vegas hosting this and future SCI conventions.

The only way we are going to make the world safe for lions like Cecil is if we exert economic pressure on anyone supporting, either directly or indirectly, animal suffering and abuse. Money talks and the hope is that Las Vegas (and Nevada) will listen, especially if groups hosting large conventions in Vegas express their concerns and relocate to other cities. Please join me in letting all entities, whether public or private, know that you oppose trophy hunting and they should not be supporting events that encourage this practice!

Change will not happen overnight. But we can drive SCI out of Las Vegas if each of us contacts the state tourism office expressing that our dollars can be happily spent elsewhere unless they cancel SCI next year.