The numbers can overwhelm any parent, or parent-to-be.

Ninety-nine percent of pregnant American woman carry multiple manmade chemicals in their bodies, sharing that concoction through the umbilical cord. More than 80,000 chemicals permitted for use in the U.S. have never been fully tested for toxicity to humans, let alone children or fetuses. And 26 years have passed since U.S. lawmakers made any significant updates to the country's regulation of toxic chemicals.

These were among the facts lamented by Sen. Barbara Boxer (D-Calif.), chairman of the Environment and Public Works Committee, Sen. Frank Lautenberg (D-N.J.), chairman of the Subcommittee on Superfund, Toxics, and Environmental Health, along with other experts and advocates during a hearing on Tuesday ahead of Wednesday’s committee vote on toxic chemical reform. The proposed Safe Chemicals Act, first introduced by Sen. Lautenberg in 2005, would replace the Toxic Substance Control Act of 1976 to essentially reverse the burden of proof on chemical safety.

"I would bet if we went outside and asked anyone walking by if they thought that chemical companies have to do tests and prove a chemical is safe before it is used, they would say, 'Of course,'" Boxer said during the hearing. "Under the law currently, the EPA has to prove it is unsafe."

As Boxer and other speakers noted, this outdated regulatory framework differs significantly from laws in the European Union, where chemicals including flame retardants must be tested and proven safe before they are placed on store shelves. Studies have found that far more chemical pollutants -- implicated in everything from obesity and infertility, to autism and asthma -- course through the blood of Americans than Europeans.

Nevertheless, the burden is expected to remain on the EPA at least through this year due to a strong partisan split over strengthening chemical reform -- a dynamic evident during the hearing. Sen. James Inhofe (R-Okla.) said that he would oppose the act "as it stands now." He also defended representatives of the fire retardent industry as it faced an onslaught of criticism during the hearing, citing how "chemistry is essential to our economy" and that flame retardants "reduce injuries and deaths." Lautenberg highlighted a recent Chicago Tribune series, which he said exposed "how some in the chemical industry have used dirty tricks and junk science to drive a public misinformation campaign that keeps dangerous flame retardants in our homes, even when those chemicals don't do what they are supposed to: prevent fires."

Anne Brock, a mother of two young girls in Knoxville, Tenn., said she feels strongly that kids should be more important than politics or another buck for a chemical company. "I would like our leaders to rise above partisanship and do what's morally right, which is to look out for the health and wellbeing of children," said Brock, who writes a blog on green living.

Brock noted that she does everything in her power to give her kids a healthy future. However, as she has learned, what a parent can do may not be enough when product labels don't list every chemical ingredient, or when a chemical's safety remains untested. In order to uncover what chemicals were triggering rashes and breathing troubles in her daughters, for example, Brock said she spent a long time "playing detective" with what they were eating and applying to their hair and skin.

"I have yet to speak to one parent who doesn't think it's a good idea to protect our children by making sure what we put on their bodies and in our homes is safe," said Brock. "Why, when the science is already there to give us some pretty strong clues, are we not doing more to help our families live longer and healthier lives?"

Much of the knowledge about the dangers of manmade chemicals has been around for decades. As Huffington magazine reported this week, Rachel Carson anticipated many of today's toxic troubles 50 years ago.

"Like the constant dripping of water that in turn wears away the hardest stone," she wrote in her 1962 book, "Silent Spring," "this birth-to-death contact with dangerous chemicals may in the end prove disastrous."

Heather Pingree, who is six months pregnant with her second child, noted in testimony at Tuesday's Senate hearing that this lifelong exposure is not limited to people living in the big city or downwind from a coal-fired power plant. She has spent most of her life living on an island 12 miles off the coast of Maine, yet a test found her body carried potentially dangerous levels of flame retardants, mercury, phthalates and other toxic chemicals.

"The chemicals in me came from products in my home and the food I eat," said Pingree, former speaker of the Maine House and now a consultant for Safer Chemicals, Healthy Families, a national coalition working to reform toxic chemical regulation.

Despite the lack of expectations for Wednesday's vote, environmental advocates expressed reason for hope. "We are going in the right direction," said Ken Cook, president of the nonprofit Environmental Working Group. "You just can't always control the pace."

Until there is stronger federal regulation, states continue to take it upon themselves. Since 2003, Pingree noted, 30 states have passed more than 150 policies to regulate chemicals.

"While I am hopeful that Congress may eventually act to protect us from the harmful effects of these flame retardants, we in Washington State will be again introducing legislation to limit our children’s exposure to toxic chemicals," said Sen. Sharon Nelson (D-Maury Island).

The challenge, advocates add, is dealing with replacements. As states ban one chemical, or concerned consumers simply push industry to phase it out, a chemical cousin that has undergone little or no testing may take its place. Such has been the story with flame retardants. Cook suggested the need for federal help to get off this "toxic treadmill."

Industry representatives, too, said they would like to see changes to toxic chemical regulation.

"To help increase public confidence in the safety of chemicals in consumer products, [the American Chemistry Council] continues to support bipartisan reform of the Toxic Substances Control Act so that the law will protect health and safety while ensuring U.S. manufacturers can innovate and compete globally," the industry lobbying group said in a statement.

A new national poll from environmental groups also suggests the public's backing for bolstering protections against toxic chemicals: 68 percent of those polled supported stricter regulations, with similar numbers on both sides of the party line. 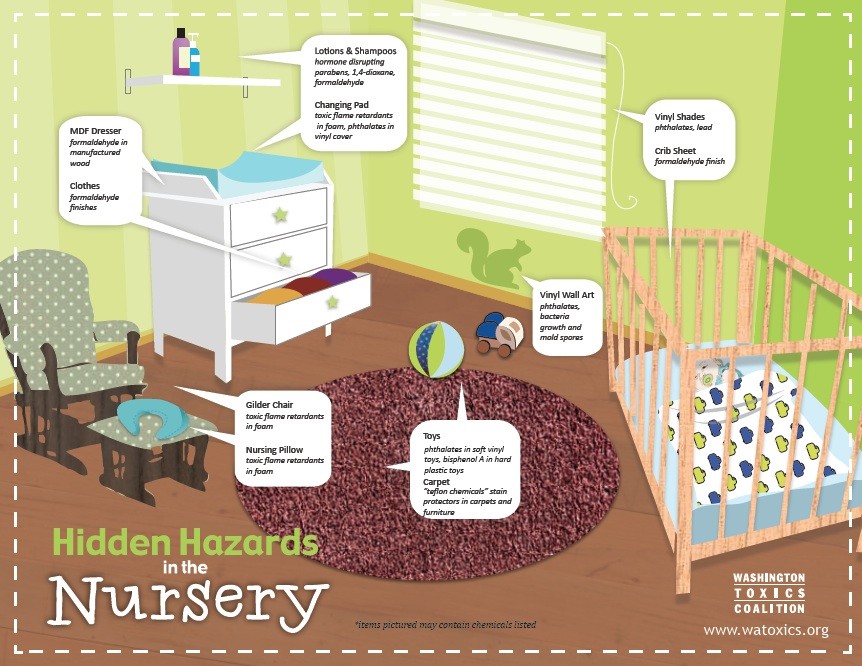