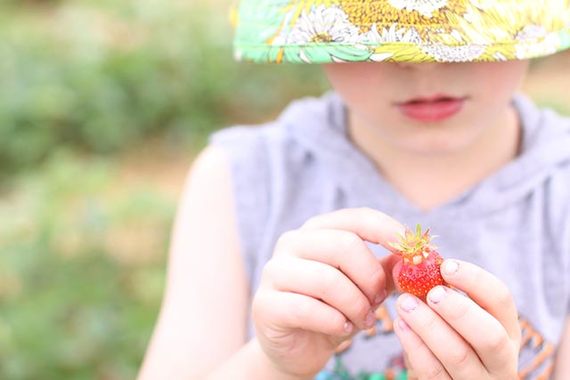 California officials appear poised to make a decision that would spell safer strawberry fields and spur farmer innovation away from hazardous chemicals and towards safer solutions. That is, if pesticide proponents don't get in the way.

After months of delay and years of review, next Friday the state plans to release a new series of "mitigations" (government speak for "protections") for the difficult-to-control fumigant pesticide called chloropicrin. And after a prolonged public hearing and comment process, the adequacy of these protections -- from no-spray buffer zones to public disclosure issues -- will be under intense scrutiny.

Pesticide proponents, including the chemical's manufacturers, are pressing officials to choose between monitoring and notification for chloropicrin applied near homes, schools and workplaces. This would leave California's rural communities, farmworkers and policymakers with partial information: either notice in advance of when and where a pesticide might be applied, or data on how much was actually applied and whether it was in the air at levels that exceeded health standards.

As usual, it's a false choice. When it comes to highly volatile, hazardous chemicals, Californians deserve to have the information to both take precautions and remedy problems.

I recently spoke with Deby Deweese, a resident of rural Santa Barbara County who found chloropicrin in the air around her home and a neighboring school at levels above DPR's "level of concern." She put it simply:

"Once again, those of us who live and work near fields watch helplessly and with little hope as DPR and the CalEPA argue over whether chloropicrin should be monitored or whether homeowners should be notified sooner. Of course, the answer is that these dangerous pesticide fumigants should be completely abolished."

Final decisions on these protections can't come soon enough, given findings from the California Department of Public Health last year that chloropicrin is the most widely used hazardous pesticide near California schools in agricultural regions of the state. And even more so given that scientists, including state scientists, now link exposure to cancer. State data shows that the pesticide's use has been increasing each year.

Voices from the fields

For the past few years, we've been working with thousands of Californians to push for greater immediate protections from chloropicrin -- and a concrete plan to phase out this and other hazardous fumigant pesticides by 2020. The warnings have been coming for years, as people across the state have shared their first-hand accounts of chloropicrin drift problems.

When I recently spoke to residents who live near strawberry fields where chloropicrin is used, they affirmed the need for comprehensive monitoring and notification and called for still more. Manuel Silveira, a Tehama County resident who also found high levels of chloropicrin in the air near his home and that of his grandchildren made it clear:

"It's pretty simple to me: chemical companies like Dow want to keep us in the dark because they're afraid of what Californians and their policymakers will do when they find out how much of a carcinogenic pesticide is applied outside our front doors."

"The bottom line is that use of fumigants like chloropicrin creates a serious health risk. Certainly, not just one, but both comprehensive notification AND the monitoring should take place."

When I attended a hearing in the summer of 2013, officials stumbled over explaining how they arrived at their mitigation proposal. It looked like officials were doing verbal acrobatics to avoid confrontation. Sorting through comments Department of Pesticide Regulation officials received over chloropicrin, many of the same players and myths appear as they did for the ill-conceived approval of cancer-causing fumigant called methyl iodide.

The pesticide industry front-group the Western Plant Health Association, as well as the Chloropicrin Manufacturers Task Force (which includes Dow Chemical Co.) are among the strongest opponents to public notification and monitoring, as well as modest no-spray buffer zones.

Dow's name has been turning up a lot lately in Sacramento, as the manufacturer of two other hazardous pesticides widely used near California schools, including neurotoxic chlorpyrifos and cancer-causing Telone (1,3-D).

It's no surprise that the very same lobbyist now calling for false choices on chloropicrin helped defeat a bill last year in the California legislature that would have created better pesticide notification for farmworkers on field signs. In one recent opinion piece, industrial ag interests argue against too much public disclosure for chloropicrin. Huh.

We heard it all before when cancer-causing methyl iodide was taken off the market under scientific scrutiny. One of the same pesticide industry consultants who espoused about the chemical's importance and benefits, echoed the same in his more recent written comments on chloropicrin. In his letter to DPR officials he argues that "the California strawberry industry will collapse" without it and "it is completely safe for use."

Surprise, surprise, he also appears in the online video for chloropicrin manufacturers looking to dispel any concerns about the chemical's safety.

In 2013, when California officials set out to create new protections for Manuel, Karen, Deby and their families, I hoped for the best. In 2015, we should remain equally hopeful that state officials can keep us on the right course to healthy communities and prosperous farming. And we will do everything in our power to make it that way.

Let's make it a resolution to put an end to false choices that only benefit industry's bottom line.