In the wake of a devastating earthquake in Nepal, a Facebook app could help people worldwide find out if their loved ones in the affected regions are all right.

“Safety Check” is a tool launched in October for the purpose of allowing users to easily alert their Facebook friends that they are OK in the case of natural disasters. If you have the app and are in an area affected by a natural disaster, you’ll get an alert asking you if you are safe. The app determines your location based on where you are using the Internet, the city listed in your profile or the last location where you were tagged. 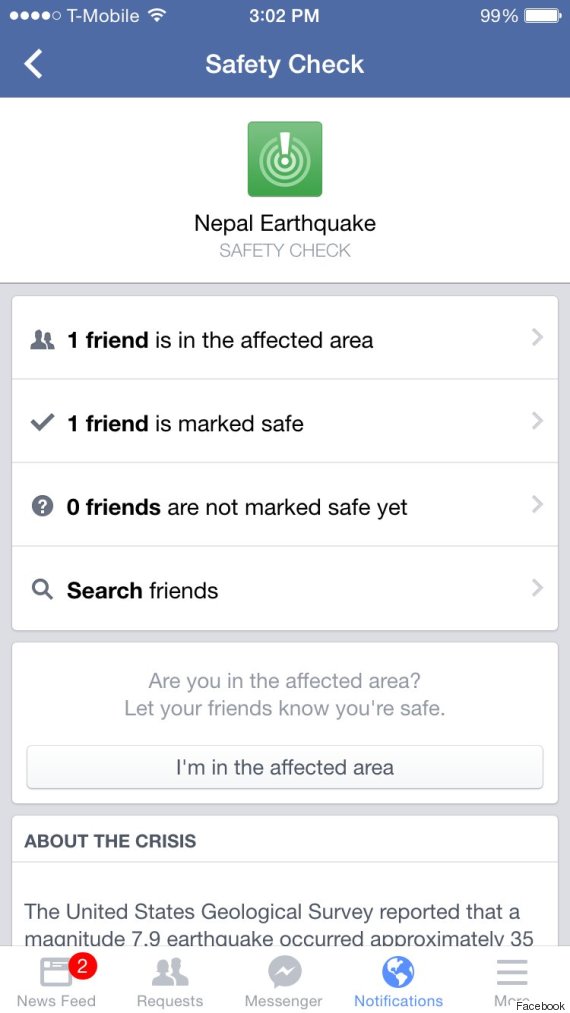 The app’s creation was inspired by the 2011 earthquake and tsunami in Japan, Mark Zuckerberg said in a statement when Facebook made the app available worldwide.

Facebook users with the app can also check to see how many friends are in an affected area and how many of those friends have checked in as safe.

The app does have some limitations -- a person must have a Facebook account, the app downloaded and access to the Internet to “check in.” However, Facebook does allow users to check in on behalf of friends who also have the app.

The earthquake, the epicenter of which was 50 miles east of Pokhara, was the worst Nepal has seen in over 80 years. “Almost the entire country has been hit," Krishna Prasad Dhakal, deputy chief of mission of Nepal's embassy in New Delhi, told Reuters.

As of Saturday afternoon, at least 1,130 people had been confirmed killed by the quake, which set off a deadly avalanche on Mt. Everest.

Neighboring countries were hit with deadly tremors, with 34 dead in India, six in Tibet, two in Bangladesh and two on the Nepal-China border.