If you take a look at an aerial view map of Long Island it won't take you but a moment to figure out why the celebrated seaside resort area affectionately called "The Hamptons " (originally settled in 1640) became so popular. Not only is it teeming with pristine beaches, historic homes and cool ocean breezes, but it's the most preferred destination, an escape really, for fast-paced Manhattanites looking for the shortest route to get out of town as they seek the serenity of the gentrified countryside. This area also features some of the most expensive residential properties within the United States; for example, the former Montauk compound of Andy Warhol, which was purchased in 1972 for $225,000, is now on the market for $85 million. When you blend all this together, mixing fame and fortune and beautiful people, it's not surprising that this remains a unique community of serious high level art collectors and dealers, along with many renowned artists-in-residence, all of which seem to fit comfortably together into one concentrated, fabulous fraternity of art world personalities that has no seasonal equal.

Art Southampton, directed by Nick Korniloff, who also brings you Art Miami, Art New York and Art Silicon Valley/San Francisco, among others, offers the value and prestige that attracts participation by leading galleries from around the world, making this fair an outstanding international event. The fair opens with a VIP Preview on July 9 that spotlights some of the finest blue chip works of art by emerging, mid-career and cutting edge artists, as well as from the Post War and Pop eras, with an additional focus on design and functional art. Outstanding galleries from cities around the world include Paris, Berlin, London, Seoul, Brussels, Bogota, Barcelona and Quebec, among many others, as well as the United States, including Miami, Palm Beach, Santa Fe, San Francisco and New York. The five day event, concluding on Monday, July 13, will be held this year on the expansive grounds of Nova's Ark Project in a 100,000 square foot pavilion.

Art Southampton also provides a robust programming schedule, including receptions with artists and book signings, and a daily art symposium sponsored by One Art Nation that brings together leading opinion leaders and art industry experts to speak on a wide range of topics covering everything from artist spotlights to panel discussions on contemporary art market trends. For the last couple of years, the fair has included a juried exhibition of promising students from the New York Academy of Art and for 2015, April Gornik, the celebrated painter (and wife of artist Eric Fischl, also summer residents in the Hamptons), has selected seventeen young talents whose work will be on display. 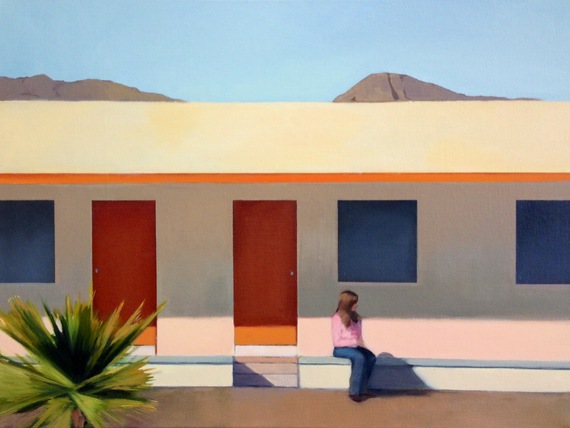 Included in this NYAA students' exhibition at the fair is At the Motel by Elisabeth McBrien, who seems to take a cue from Edward Hopper, along with a dash of Diebenkorn and a pinch of Hockney in this fresh and handsomely mature painting that also incorporates some minimalist geometric passages of colorful squares and rectangles. Twin peaks look over the motel's roof as a girl sits patiently by the door, like a classic Hopper-esque subject. After checking out McBrien's website (www.elisabethmcbrien.com), it's clear that the artist is a rare talent in the figurative tradition, whose consistency of imagery is uncanny. (www.nyaa.edu)

While it's a challenge to carefully examine everything presented at the fair, the seasoned crowd seems to work out their own exploratory strategy for covering all the bases, although it may take more than one visit. The images featured in this review offer a brief tour of some of my favorites that I've had the pleasure to view in advance, along with a bit of commentary: 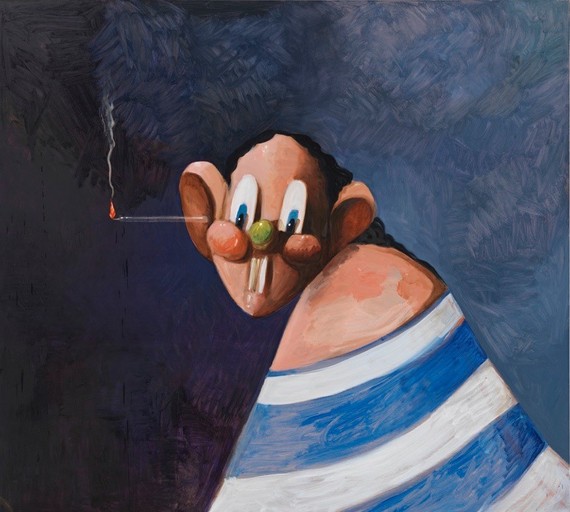 Looking for a big impressive condo with a nice view as a promising investment? Arcature Fine Art of Palm Beach is presenting an outstanding large-scale painting by George Condo titled The Sailor of the Indoor Seas. Condo historically coined the term "Artificial Realism" to describe his hybridization of traditional European Old Masters painting with a sensibility informed by American Pop. A curator from MoMA stated, "George opened the door for artists to use the history of painting in a way that was not appropriation." (www.arcaturefineart.com) 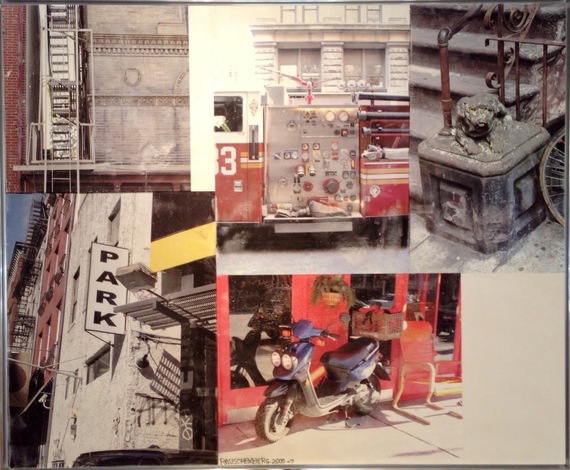 No respectable art fair can do without at least one impressive Rauschenberg painting, and this work presented by Casterline Goodman Gallery is a perfect example of the vibrancy and inventiveness of one of America's most influential artists. Like many artists, particularly from the Pop art movement, Rauschenberg appropriated printed imagery from a range of sources, until a lawsuit was settled unfavorably concerning copyright infringement, then he shifted immediately to using his own photographs exclusively as compositional elements, which are evident in this remarkably idiosyncratic mixed media work. (www.casterlinegoodman.com) 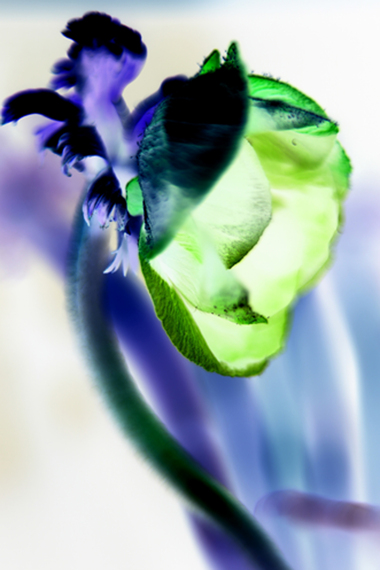 Christiane Richter's work brings a unique emphasis to the art of dealing with perceptions and documentary interpretations. The questions of the observer's point of view regarding light, color and form are central to her vision. Richter's stark, lovely and somewhat eerily tinted photographs are reminiscent of stained canvas in abstract color field paintings, which have a fresh narrative viewpoint; in this instance, flowers that may have been influenced by early darkroom experiments by Man Ray. (www.priveekollektie.com) 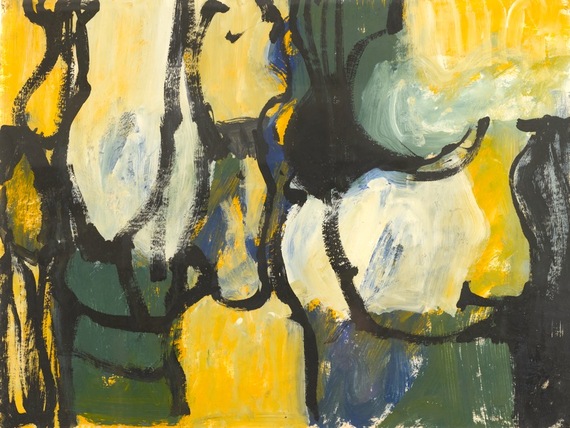 Charlotte Park's important contribution to the Abstract Expressionist movement has been recently acknowledged, and it's about time. Writing in The New York Times, just before Park died in late 2010, Roberta Smith called Park "A natural painter and a gifted colorist." She was overshadowed by the attention given to the work of her husband, James Brooks, even though she painted some of the strongest and most brilliantly colored canvases of her time. (www.berrycampbell.com) 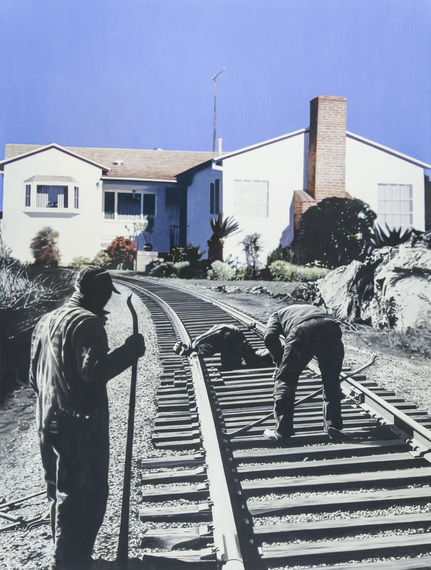 Martin Mull is an amusing storyteller in language, music and film and in his painting, which matured as a graduate student at the Rhode Island School of Design, where he was a brilliant photorealist airbrush painter. Although celebrated as an actor and comedian, not as many know that his real love and dedication is to his art, polishing his already superb and often sarcastic and witty slants on everyday American life as he frequently portrays a juxtaposition of middle class nostalgia and values with overlapping passages of underlying tension and unlikely possibilities. (www.hirschlandadler.com) 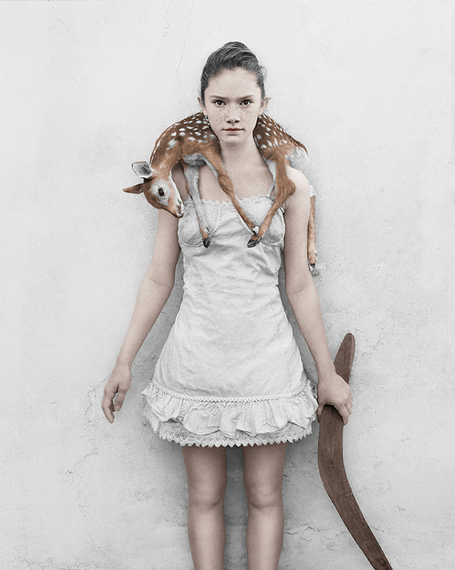 Vee Speers' Untitled #32, The Bulletproof Series is a hauntingly beautiful and somewhat peculiar portrait of a young girl in a white dress leaning on a white wall, embellished with a fawn on her shoulders and a boomerang in her hand. Born in Australia and living in Paris since 1990, Speers' timeless portraits have been exhibited worldwide. Her recent monograph Bordello has a foreword by Karl Lagerfeld. (www.jacksonfineart.com) 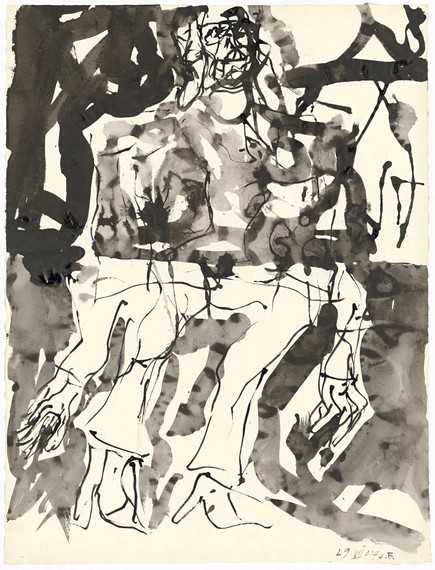 Untitled by Georg Baselitz is a distinguished example of the artist's continuing exploration of pioneering German Neo-Expressionist imagery. His work, like this one, evokes disquieting subject matter rendered feverishly with a variety of marks as a means of confronting the realities of the modern age. Drawing upon a dynamic and myriad pool of influences, including art of the Mannerist period and African sculptures, Baselitz developed a distinct painting language. (http://www.galerie-terminus.de) 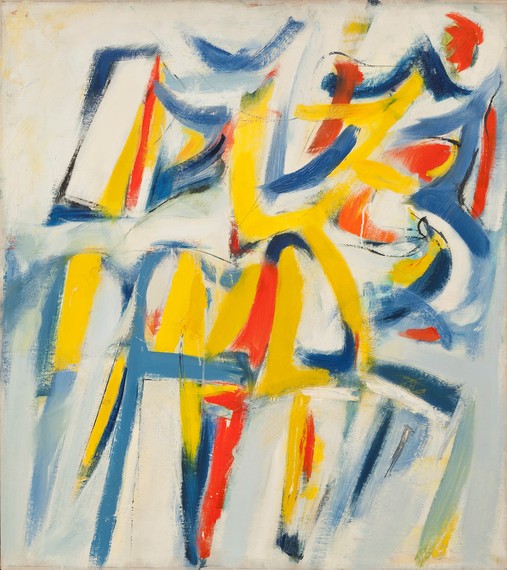 It's been said that the most uniquely American contributions to planetary culture are jazz and Abstraction Expressionism. The best known artist in this distinguished category is de Kooning, but based on Jack Tworkov's House of the Sun Variation above, a good argument can be made that this is an equal or perhaps superior painting. For my money, it's a picture worth having for daily visual pleasure and as a solid investment, as it's my very favorite at the fair, and a remarkable canvas like this one is a rare find indeed. (http://www.hollistaggart.com)