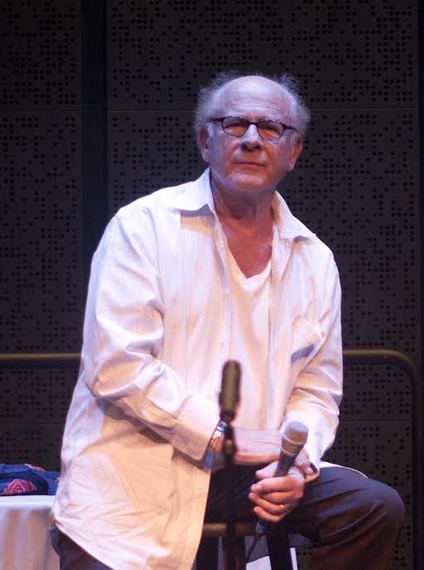 On a humid Martha's Vineyard night, I drove across the street to our Performing Arts Center to see Art Garfunkel's concert. What I could not know is that short journey that I made would lead me into Mr. Garfunkel's profound encounter with what propels him into this world. The first thing the now elder tenor says to us is that he almost cancelled the show as he was once again having trouble with his voice. We could hear the obvious. Along with the performer we wonder if he'll be able to sing one of his precious songs that had elevated us through decades of life.

Maya Angelou once wrote I know why the caged bird sings. Art Garfunkel flies into that cage late in life and struggles to find an answer. In 2010 Mr. Garfunkel was diagnosed with paresis, which is paralysis of the vocal chords. I cannot imagine how he felt when he opened his mouth and nothing appeared. Everything was in jeopardy. Paresis could even make breathing difficult. On the other side of darkness this July, the caged bird is struggling to fly. The embodiment of a pure tenor tells us that he will read us some of his poetry regarding father, family. In addition, he will sing. It is clear he is not sure if he can come close to his tunes.

During the concert our troubadour tells us how he discovered his beautiful gift. He was 10 years old and was singing from the Torah ancient Hebrew chants and when he looked up from his text, he looked onto the audience and saw that they were enraptured by his performance. It was then he knew that his destiny had been revealed to him. He was 10.

This evening his audience is looking at him with great expectations. But now, we are wondering if he will be able to sing just one note. And sing he does. He may not be able to reach the higher range of his voice so gracefully as he once did, but he did elevate to those heights bringing us with him.

After a false start in 2012 when Mr. Garfunkel tried to concertize again, but could not, he finally succeeded in 2014, four years after his original diagnosis and just one year previous to this extraordinary moment. I do not wish to give the impression that Mr. Garfunkel was skating on our sympathy. Hardly. He gave a beautiful performance that truly mesmerized us. The mix of his singing, poetry and later a Q&A lifted us until we were gliding on a summer night's breeze. Our guide for the evening would from time to time refer to his voice as a bird in his throat. On an island that is blessed with songs of delight from morning till night emanating from a treasure trove of winged beings, Mr. Garfunkel was right at home.

One can only guess the profound depths through which Art Garfunkel had to dive in order to make sense of his affliction that nearly took everything away from him. He did not really talk about that, but perhaps his new autobiography will. Imagine, if you will, your entire identity wiped clean and there you are with nothing to hang your hat on except, horror of all horrors, you! I can only surmise that our singer had to encounter himself in ways he was not obliged to do before. An affliction can sometimes be a gift and if this concert was any indication, Art Garfunkel comes through his shadowed night of the soul brimming with elegance and grace. A true star in the human firmament.

Like millions of others I don't think I ever appreciated Mr. Garfunkel's contribution to Simon and Garfunkel's grand accomplishments. It was always Paul who wrote the songs and his partner, Art, was there to make them pretty. Now I know the enormous contribution Mr. Garfunkel made to the outstanding body of work those two manifested. He produced, arranged and was an essential component. He heard the songs and illuminated them with his exceptional musicality.

The caged bird continues to sing. His heart shines and pulsates with love. At the end of the night, clearly triumphant, Mr. Garfunkel thanked us as we stood up to applaud. On this modest island night my small trip across the road allowed me to witness courage, talent and grace. I am forever grateful for the privilege of hearing this elegant human being throughout my adult life. Long may his wings sail.