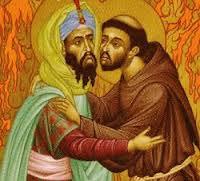 My first spiritual teacher was Ram Dass, author of the iconic book, Be Here Now, which introduced a generation of Americans to the ancient wisdom of the East. Along with framed photographs of his guru, Neem Karoli Baba (affectionately known as Maharaji), and statues of Krishna (Lord of Love) and Ganesh (Remover of Obstacles), Ram Dass (a Jew, by the way) kept pictures of Christ and Mother Mary and carvings of Saint Francis on his altar, and he quoted with intimacy from the New Testament. Maharaji himself taught his Western devotees to "meditate like Christ," as Krishna Das, contemporary kirtan master, writes about in Chants of a Lifetime. My entire spiritual formation was predicated on the interconnected teachings of all spiritual traditions, and the unifying message of love.

I first met Ram Dass at the Lama Foundation in the mountains of Northern New Mexico when I was fourteen, and our paths have intertwined ever since. Lama is the original inter-spiritual community, a place where all faiths meet and mingle: Hindu, Buddhist, Sufi, Christian, Jewish, Native American, and the emerging path that has no name yet praises all forms of the sacred. Lama is leaderless, which may be one of the reasons it has thrived for almost 50 years. From full moon to new and new moon to full, each resident takes a turn as "watch," responsible for the spiritual guidance, guest hospitality, and daily business of the community for that period. When their time is up, they let go. There is no creed to affirm, no dues to pay. Those whose hearts find a home there enigmatically refer to themselves as Lama Beans -- the name they adopted for their volleyball team when they played against the neighboring commune of New Buffalo in the early 1970s.

It was at Lama that I first fell in love with Saint Francis. How was I to know that he was the accidental founder of the largest order of institutionalized Christendom? I grew up in a family of Jewish agnostics who had tuned in, turned on, and dropped out. All I knew was that this gentle Italian saint from the thirteenth century loved animals as much as I did, that, like me, he wandered barefoot through the hills and meadows, and talked to donkeys and crows. His heart, like mine, fell at the feet of anyone who was suffering, and he preferred to sing than speak. Francis was also an interfaith prophet and a radical peace activist.

At the height of the Christian Crusades, Francis walked for days and risked his life to cross enemy lines and personally meet with the Sultan of Egypt where he listened -- really listened -- to the wisdom at the heart of Islam. Both men emerged from that encounter changed. Although Francis was on a mission to convert his opponent to Christianity, and Malik-al-Kamil was committed to opposing the Crusades with all his might, their individual agendas fell away as they sat together. It was Francis' devotion to his beloved Brother Christ that broke open the sultan's heart, and it was the unequivocal surrender to the Divine which characterizes Muslim life that reanimated the way Francis approached spiritual practice. Their mutual willingness to be present to the living essence of the other's faith created an alchemical transmutation that turned the lead of conflict into the gold of love.

Legend tells us that Malik sent Francis home with the gift of an ivory horn the muezzin would sound to call the faithful to prayer, and which Francis used from then on to summon his own people into remembrance of God. This is peacemaking at its best: the disarming of hearts. This is authentic inter-spirituality: a living, life-giving, life-changing encounter with the sacred in another tradition. This is my legacy as a Jewish woman with a Hindu guru, a lifelong Buddhist meditation practice, a close connection with indigenous traditions, and an abiding love of Christ.

And so it is with curiosity and hopefulness that I watch as the new leader of the Roman Catholic Church -- one of the most powerful roles on the planet -- takes on the name of his humble forebear. Pope Francis is changing the way the world sees an institution that has historically wielded its authority as a weapon. Francis of Assisi was the epitome of non-violence in action. He lived his master's teachings of identification with those on the margins and celebrated his interconnectedness with all of creation, from Sister Water to Brother Fire, from lepers to kings. I doubt that the pope will ever make his way up the miles of dirt road to my beloved interspiritual mountaintop monastery, Lama. But I like to think that if Saint Francis had known about us he would have felt completely at home there.

Saint Francis of Assisi: Brother of Creation (Contemplations & Living Wisdom)
By Mirabai Starr
God of Love: A Guide to the Heart of Judaism, Christianity and Islam
By Mirabai Starr