December 13th is the date when children across Sweden dress up in white sheets, set their heads on fire (they actually don't, they just put flaming candles in their hair) and parade through the city singing Christmas carols. Welcome to Lucia, a slightly weird but beautiful winter celebration, deeply rooted in the heart of every Swede.

Lucia is weird partly because it's origin is a medieval patchwork of folklore combined with pagan, Catholic and Lutheran traditions from Italy, Sweden and Germany. The Catholic roots 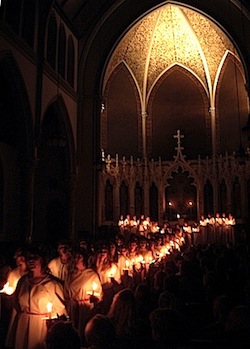 come from Sicily where Saint Lucia was killed for her beliefs and subsequently celebrated as a saint during the old Julian calendar winter solstice - on the 13th of December. Pagan, because the winter solstice was considered an especially dangerous time in 16th century Sweden. Evil powers were at play, and even the animals were believed to be able to speak during the winter solstice. Actions were taken to keep ghosts and goblins away, and the Chrismas pig was supposed to be butchered before this day. And top if off, the Catholic fast was closing in, so in order to prepare for the dark weeks ahead - a celebration took place, a feast, to eat and drink as much as possible while people still could. The white dress and candle crown that the "Lucia Bride" was wearing was borrowed from Germany, where it was used to symbolize baby Jesus during Christmas, to add just a little bit more geographical and cultural confusion.

Then, as time pushed on, Sweden steered away from the Julian calendar and on to the current Gregorian calendar. Winter solstice was moved closer to Christmas, and as the country became Lutheran, most of the old Catholic traditions were scrapped by the new religious leaders. But the Church couldn't persuade the people to stop celebrating Saint Lucia, and so it has lived on ever since, both as a religious celebration and a cultural festivity.

These days, on the 13th of December - hundreds of Lucia parades visit churches, hospitals, schools and work places across the nation - Saint Lucia with candles in her hair, accompanied by her maids and the "Star Boys" (which is not a 17th century boy band, contrary to popular belief) - singing Chrismas and Lucia carols. It is absolutely magical, and I recommend anyone to visit one of the many Lucia parades in the US - for instance the one arranged by the Swedish Church in New York (picture).

An essential part of the Lucia celebration is the "Lussebulle" - the Lucia Bun. A golden saffron infused wheat bun, decorated with raisins. As beautiful as the parade itself and absolutely delicious. Moist, and with just the right level of sweetness.

Serve it with coffee, or even better with some mulled wine - and be overwhelmed with Christmas spirit. 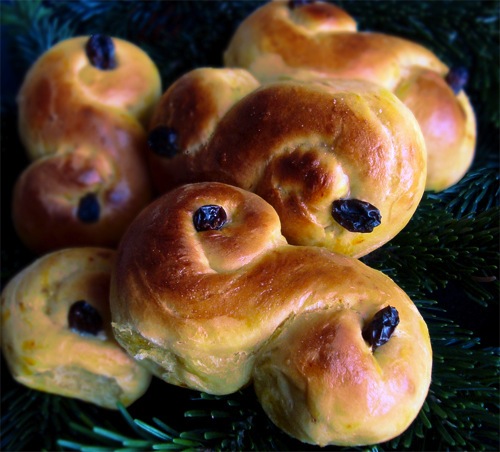 How to:
1. Melt butter in a small pan over low heat. Add milk and warm through until body temperature. Pour into a large bowl. Add the yeast and let it rest for 3-4 minutes.
2. Add yoghurt, saffron, sugar, salt and stir for a minute until the yoghurt is almost mixed with the butter and milk. Add the flour little by little, and work it into a smooth dough (you'll need about 3/4 of the flour for the dough). Let the dough rise under a kitchen towel for about 45 minutes.
3. Punch down the dough (have the rest of the flour ready if more is needed to make it smooth), and then start making the buns. On a floured table, make 6-7 inches long tubes, and curl them up into S shaped buns. Place on a baking sheet, and garnish with raisins. Leave to rise for another 45 minutes.
4. Brush each lussebulle with beaten egg and bake in a 400°F oven for 10-15 minutes (small ones can be baked on 450°F for about 5-8 minutes).