Nearly 500 people so far have signed an online petition demanding changes in how sexual violence and harassment are handled at Saint Mary's College in Notre Dame, Indiana. Students, faculty and alumnae from the Catholic women's college symbolically delivered the petition to the college president's office on Thursday.

Saint Mary's, a sister school to the University of Notre Dame with about 1,500 students, has come under extra scrutiny as a result of the campus rape documentary "The Hunting Ground." Among similar stories nationwide, the film features Saint Mary's students who were allegedly assaulted by Notre Dame athletes. In particular, it talks about Lizzy Seeberg, who reported being attacked by a Notre Dame football player in 2010. Ten days later, Seeberg killed herself -- the local police had not yet interviewed her alleged assailant.

Notre Dame is currently under two federal Title IX investigations for how it handles sexual harassment complaints. The petition calls for Saint Mary's to "demand a public and appropriate response and apology" from Notre Dame for its "inadequate responses."

Overall, the petition wants Saint Mary's to institute a new third-party investigation model for all sexual misconduct cases, to gather input from students on sexual violence policies, to clarify how students can report assaults and to review how it handles same-sex cases. Jessica Lopez, a 2013 Saint Mary's graduate and author of the petition, said the activists are hoping to use the increased public attention to spark "positive change."

On Wednesday, college President Carol Ann Mooney announced that she would appoint a task force in the fall to examine possible reforms to the school's Title IX and gender-based violence policies.

One particular demand the petition makes is that Saint Mary's choose someone other than the college's legal counsel, as is now the case, to be the Title IX coordinator. The petition argues that having the Saint Mary's lawyer oversee the school's treatment of victims of rape and harassment is a conflict of interest.

"While it is possible that a conflict of interest can arise if college counsel serves at Title IX coordinator, no such conflicts have arisen to date," said Gwen O'Brien, spokeswoman for Saint Mary's. "Our Title IX coordinator does not investigate claims but ensures that proper processes are followed."

Karen DeCocker, an alumna who is teaching a nursing course this semester at Saint Mary's, says that some students told her that resident advisers had verbally warned them that participating in disruptive demonstrations "would be used against them." The RAs allegedly pointed to a portion of the student code of conduct that prohibits "participating in an on-campus or off-campus demonstration, riot or activity that disrupts the normal operations of Saint Mary's College and/or infringes on the educational opportunities of the members of the Saint Mary's College community."

That's why Thursday's protest did not feature current students waving signs or making any statements, said DeCocker, who helped lead the march.

O'Brien said that the college's RAs were never instructed to warn students against demonstrating.

As a nurse herself, DeCocker said she has treated sexual assault survivors from Notre Dame and Saint Mary's, and she noted that many of them hesitated to report those attacks. "It's way more hassle and no one believes you," is how she described the students' feelings. "They always went back and cited Lizzy."

A faculty member who asked to remain anonymous to avoid retaliation said that the school's sexual assault policies have long been a concern, but that students and professors hesitated to speak out for fear of backlash from the administration. "My impression is with 'The Hunting Ground,' now they feel like they have this national platform, that they feel more comfortable with it now," the faculty member said.

O'Brien said that the college has tried to be transparent and has engaged in discussions with students about their concerns. She noted that the president hosted a panel discussion following a screening of "The Hunting Ground."

"I've seen it five times. It's not going to get better the more times you watch it. We knew it wasn't going to be good for us," O'Brien said.

Another Saint Mary's student featured in "The Hunting Ground," Rachel Hudak, had alleged that she was set up to be sexually assaulted by a Notre Dame athlete but struggled to get the university or local prosecutors to take on her case.

"I'm not saying [Hudak's case] was handled well, but it was 10 years ago," O'Brien said, adding that Saint Mary's has made improvements in recent years.

"Culturally, we are all more aware than we were 10 years ago in how we serve women," said O'Brien. "Survivors of these kinds of things feel more empowered." 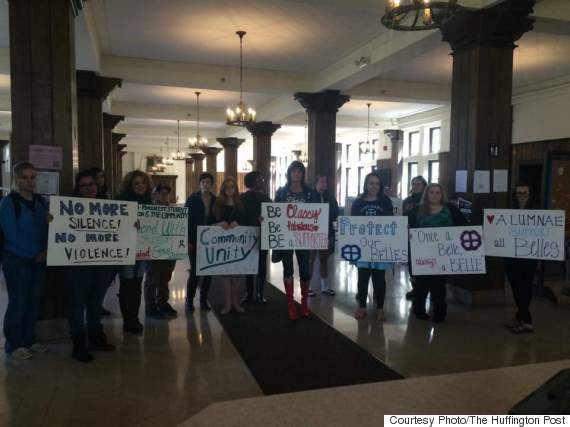