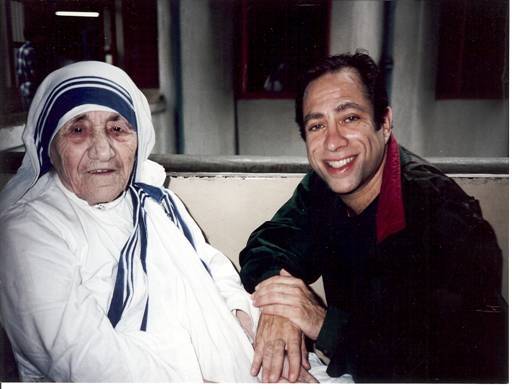 As Mother Teresa is being declared a saint by Pope Francis, I remember our meeting in the last year of her life. In 1996, I was visiting India and one evening after viewing the Taj Mahal in Agra, I met a priest in the hotel bar. Really. He was on his way to Mother Teresa's Home for the Dying Destitute. When I mentioned my lifelong work with the dying, he asked if I wanted to join him.

He said, "It's India. Everybody just shows up. There's no guarantee Mother will be there but you can see her facility for the dying."

The next thing I knew I was on a train to Calcutta. The poverty was excruciating. The priest was doing mass the next morning at The Mother House (Missionaries of Charity), which I attended. There she was, all five feet of her. She was at a distance and at the end of Mass left quickly. Later I went to visit Mother Teresa's Home for the Dying Destitutes (Nirmal Hriday - Home of the Pure Heart), her home for the dying. Forty grey foam wooden cots with dying people covered the room in rows, and I was stunned. I'm American where one person neatly dies in a room surrounded by family and friends.

I approached the sister in charge and said, "I'm here to volunteer. What are people dying of?"

She replied calmly, "We don't know and it doesn't matter. Are you here to help?"

I walked around looking for something to do for these unfortunate souls. There were no IV's to hang, no vital signs to check, and no common language. Some of these people had never experienced a moment of kindness in their life. Part of the mission was to make sure they felt love before they left this earth. So I just sat with them, one human caring about another. If they needed a shower, there were no mechanical lifts. I just had to pick them up, carry them and hold them under the shower. When they got a shower, so did I, but in the stifling heat of Calcutta, the more showers the better.

The next morning, I wanted to visit Mother Teresa's orphanage. When I asked for directions at The Mother House, a sister said, "I told Mother Teresa you had worked with Elisabeth Kübler Ross and you were writing a book about the needs of the dying. She will meet with you."

I opened my Day Runner planner to write down the appointment time when the sister gestured to me and said, "Come." I followed her down the hallway and we entered a sitting area. There she was! When I sat beside her, she grabbed my hand like I was an old friend. She had kind brown eyes, intensely wrinkled skin, and the warmest of smiles. I thought this would be an electrifying meeting but in truth, it had a profound simplicity. She asked about me and what had brought me to India.

I told her about my work in hospice and how we had been overwhelmed with the AIDS epidemic in the nineties. She told me they had cared for many people dying of AIDS. She said we must care for everyone. Then she leaned in and told me that in the not too distant future she would be dying, too. She was so looking forward to being with her Maker. I noticed that when she talked about God, it sounded like He was her oldest, dearest friend. I had never heard anyone speak so personally about their relationship with God.

I was trying to get my bearings. Mother Teresa, herself, was sitting with me, telling me she would be dying soon, when she said, "Do you have a business card?"

One of the sisters brought her a business card and she said, "You Americans love business cards. Let's switch." She handed me her card with a beautiful prayer that said,

Mother Teresa was giggling and I felt tangible happiness exuding from her. She was the happiest person I've ever experienced. We spoke intimately for a while and when I was about to leave, she grabbed my hand once again. "Please pray for me," she said.

I was taken aback. The Pope prayed for this woman. Why did she need my prayers? But I realized that in Mother Teresa's eyes, all prayers were equal. They all mattered.

A couple of months later, after I sent the galleys of my finished book, The Needs of The Dying to her, I was overwhelmed that she sent me back the loveliest words of praise for the book. But a few people were unhappy about that. There were many who asked, "why him?" Also a devout Catholic doing an early peer review of the book said, "We think you should get rid of the story about the AIDS patient before it is published."

"Mother Teresa didn't have a problem with caring for people with AIDS," I said.

I kept the story. For me the point was about the service. The details didn't matter. Because of her simple kindness to me, I have always tried to keep the service first. Seeing God in the other I am serving. Her gifts to me were deeply personal and her work was inspiring. I often believe without her kind words, my book would not have had the reach to help so many people.

Still, as a new, young writer and caregiver, I was thrown by questions about whether I deserve Mother Teresa's praise. I confided in a close colleague who was a priest, "I understand that people out there have been doing this work longer than I have and are probably more deserving of praise from Mother Teresa than I am."

He said, "So you don't feel you deserve it. Then here is what you have to do. Spend every day of your life earning that praise."

And that is what I do. I will always cherish the day a Saint gave me her business card.