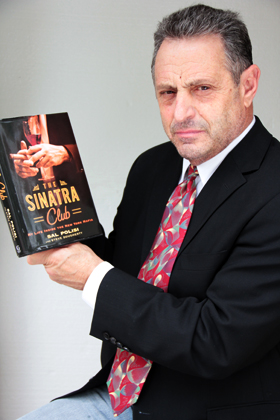 Talk to Sal Polisi today and, as I did, you may find it difficult to reconcile this man with the person he describes in his autobiography, The Sinatra Club. The guy in the book -- nicknamed "Sally Ubatz" ("crazy Sal") by his gang of friends -- bears no resemblance to the man I met by phone for a newspaper assignment in December, in person in January and with whom I have spoken many times since.

However, in the interest of honest reporting, I have to point out that his "friends" were, in truth, co-conspirators, and point out that the word "gang" does not apply to him as the casual word with which one might describe the kids who hung together in the malt shop.

You see, the gangs in Polisi's life were the Columbos, Gambinos and the rest of the Five Families in the New York Mafia and his friends were John Gotti and others in "the Life."

The Sinatra Club, Sal Polisi's book about his life back in the day is due out from Simon and Schuster on Tuesday and he has also been telling his story in dramatic form, in a one-man play he's performed in California -- where he now lives -- and will perform this Sunday, July 22, at 2 pm, in Las Vegas at the Clark County Library.

Polisi was born in Brooklyn and born into the Life. As he grew up, the Mafia was becoming a popular cultural touchstone. TV shows like The Untouchables (1959-63) and, in 1972, the first Godfather movie, made Americans hyper-aware of the mob and -- although there was lots of nasty business involved -- being a mobster looked like fun to many people. One of those was Sal Polisi.

He says, "We became the ultimate example of life imitating art and vice versa. It was very infectious -- all the people talking about The Godfather. They were so enamored with the movie. We were the characters up on the screen. It was a strange type of validation that was fuel to ignite our star. We were these people they saw on the screen who would go out and rob banks and trucks and beat people up. Half of the public was fascinated by us and half had fear. Either way, the public was captivated by mobsters in that summer of 1972.

"It was," he says, "a different time in the 70s. People thought we were heroes, but we were zeroes."

He adds, "And, don't forget -- at the same time in 1972 you had Watergate going on so there was a genuine disdain for government. That was the summer of the Munich Olympics and there was also a new craving for drugs at that time. So we did a lot of illicit things, got away with it and we thought we were kings of the street."

Polisi had what was, by any standard, an awful childhood. His mother abandoned the family when he was young. With an unresponsive, overbearing father, he was raised mostly by his uncle who brought him into the Life -- taking him along to gamble and teaching him the rules of the game. It was only natural that Polisi follow that path. Then, when he was 20, his sister, brother, grandfather and godfather all died within a year. That left him, essentially, without a family in the traditional sense. But, he had another kind of family and he was enthusiastic about being with them.

"I was an excitement junkie," he says. "I loved the action."

"A guy like John Gotti," Polisi writes, "was different. He was far more ambitious than me... He wasn't just in it for the rush and the riches. He wanted the power and the glory."

The title of the book comes from the after-hours club Polisi opened in Queens. It, in turn, got its name from the music on the juke box (records and player all stolen) and it served as a gathering place for wiseguys. It was there that they could come to gamble, talk and plot crimes together.

The Sinatra Club is certainly Sal Polisi's autobiography, but it is also an insider's look at organized crime, with details of The Life that haven't been made public until now.

Polisi talks about how he earned his nickname -- "'ubatz' being "Brooklyn for upazzo, 'crazy in Italian."

He writes in detail about John Gotti's ("Johnny Boy's) growth to head of the Gambino Family. He first saw Gotti in a Gambino bar in 1968. He recalls in the book:

"From where I stood at the bar, I couldn't make out much about him except that he looked like a typical tough guy with linebacker shoulders and his hair swept up like a hood from the 50s....

"But back then... if anybody else told me that this guy Johnny Boy, a low-level Gambino with a Capone fixation would one day not only become boss of that family and the most powerful Mafia leader in the country, but would rewrite the history of the Mob and become world famous in the process, I would have they they were the ones who were upazzo."

The book talks in detail about Gotti, the inner workings of the mob and sheds light on the decades-old discussion of the role of Mafia and their friend J. Edgar Hoover in the assassinations of John and Robert Kennedy.

Never having killed anyone, Polisi was not a "made" man. He was one of the crew. The fact that he wasn't made, however, does not mean he didn't participate in a great deal of mayhem -- there are detailed accounts of robberies, beatings and his dealings with women.

As a mobster, Polisi disregarded his marriage and was not there for his two sons. As the boys grew up Polisi decided he wanted out.

Given the opportunity, he left the Mob and became a federal witness against Gotti and other mobsters and went into the Witness Protection Program. That was 28 years ago.

That move to testify led to the spotlight shining on Polisi. He found that when he left crime behind, his addiction to excitement was replaced by an addiction to attention.

Here are clips of Polisi in that spotlight:
He was featured in articles in
The New York Times, Playboy, Vanity Fair
and
New York.
The latter led to the Nick Taylor book about him,
The Sins of the Father.
He played himself in a 2007 TV show. There was also a 2010 film,
Sinatra Club
and a 2011 documentary called
Ubatz.

Moving to California 20 years ago to begin anew, Polisi first managed an apartment building. One of the tenants was Bill Minkin, former radio host, college professor, actor and known associate of Martin Scorsese.

Minkin says of his friend, "We started to talk. He told me he had a book written about him and that he came to LA because he wanted to be a screenwriter. I was an associate professor of screenwriting at NYU when Marty Scorsese was there. When Sal told me he knew Henry Hill, the main character in Goodfellas, I got interested.

"You know," he adds, "Henry Hill never really changed from who he was. Sal has changed. I don't know the guy in The Sinatra Club. In fact, Sal is actually a hero. After the Northridge earthquake in 1994, he found a leaking gas main and turned off the gas. It's unthinkable to imagine what would have happened if it had exploded."

Polisi's marriage to his first wife, whom he describes in the book as "sweet and caring" ended after 20 years, as did his subsequent marriage. He has three sons and a daughter. Therapy helped him come to terms with his life. "I was a narcissist and I was insecure. I totally get that what I did was wrong," he says.

Today a writer, producer, performer and motivational speaker, Polisi says, "I don't regret anything. First of all, because of who I was, my four children are the opposite of me. They're law-abiding and highly educated. Because of the way I lived and the fact I changed, I can help other people change. I believe I've been especially designated to do that.

"I left crime 28 years ago and never went back. That's what I talk about. I went from racketeer to raconteur."

Polisi is excited about this book, noting, "I got a six-figure advance to tell the truth." Looking back, he says, "I've learned you can stop one day. But, is it easy? No? That's what the next book will be about."