It was truly blessed meat. Over every animal held in arms and slaughtered, a prayer was said as the swift, sharp deed of taking life in sacrifice was made. There is no denying the gravity of these transforming moments when man, animal, prayer, blade and blood meet. Life is messy and still, all life is holy.

Many sacrifices were made in that day of Eid-ul-Adha at the small custom-exempt slaughterhouse which I visited. Moroccans, Indians, Pakistanis, Senegalese, British-Muslims and more, came for the sacrifice and the halal meat that would grace their feast. As is customary, the meat (lamb or goat depending on culinary tradition) would be distributed thus: one-third for home, one-third to friends and neighbors and one-third to charity.

Temple Grandin, professor of animal sciences and internationally acclaimed consultant in humane handling of livestock, writes "Ritual slaughter is done according to the religious requirements of either the Jewish or Muslim religious faith. The animal is slaughtered, without being stunned, with a razor sharp knife." Like any method of slaughter, ritual slaughter can be done very well or done very poorly or, fall somewhere in between. Temple continues:

"When the cut is done correctly, the animal appears not to feel it. From an animal welfare standpoint, the major concern during ritual slaughter are the stressful and cruel methods of restraint (holding) that are used in some plants. Progressive slaughter plants use devices to hold the animal in a comfortable, upright position. Unfortunately, there are some plants which use cruel methods of restraint such as hanging live animals upside down."

The sights, smells and sounds of slaughterhouses are not new to me. My work has included building a mobile poultry processing trailer that in its four years of operation has transformed a local food system. However despite increasing demand for traceable, more localized and healthier meat, there are chasms in meat production infrastructures that barely support accessible, affordable, safe, fair wage, clean, permitted, size-appropriate humane slaughter and processing facilities that could provide any kind of slaughter-ritual or otherwise.

When the main priorities of meat are so narrowly silo-ed through the lenses of efficiency models and profit margins care for livestock goes terribly awry and terrible things can and do happen to workers and to the environment. The industrialized food system stokes our nation's seemingly undeniable appetite for meat and hence we all suffer the dire and ill-consequences of factory farming and its dark complement, factory slaughterhouses.

I hold hope that people are not the monsters in this and that instead this system based in "unfettered capitalism" is the beast. It is being challenged in the many unjust and immoral chinks in its armor. It must change. But reform takes time, money and adaptive strategies to build new, responsible and resilient paradigms. Although besides raw milk, I don't know of another topic that can rile usually sane folk into a fervent rectitude impervious to negotiation, than slaughter. And that's once you're lucky enough that they'd even consider the subject at all.

That day the slaughterhouse accommodated the spiritual and the secular both. The animal and its end remained connected and actually, honored. This seems so evident yet it is very much a parallel universe to our current reality. It was the antithesis to unconscionable business practices that churn out things such as standardized, boneless, skinless parts or ground up economy packs, plastic-wrapped atop diaper-ish materials that deny and sanitize away any inkling of the sentient beings from which those bits were collected and assembled. Sacred they are still because from life they came and it is food yet profane for how little we take care for it.

One young Muslim woman explained that "This is not about halal meat. That I can buy at many stores. This is about taking the action. To practice our religion freely, here in America. In my country." She hailed from Pennsylvania. Her blond-haired children stood by while her husband said the blessing in Arabic over their lamb. When blade makes swift meet of throat there is no denying life taken to sustain.

So whose value system do we apply to slaughter? Should it not be neutral, open to all and hold high only the safest and most ethical stewardship of domesticated animal, human and environment? The industries' corporations, its lawyers, marketers, lobbyists, politicians and even some of its regulatory agencies steadfastly argue and influence that the meat they want me to believe in and buy -- that comes from their making to feed my children -- holds such truths in its very fibers. From my very bones, this I know to be untrue.

In detaching from this messy business of life, death and dinner, this work has been forfeited to a very few. Whether you eat meat or not, what have we relinquished so detached now we are from our own humanity? Which intentions and connections have fallen away and given rise to these wretched consequences that we now must wrestle with and will do so for generations to come? I offer that these aren't questions to be answered in one-size solution fits all, black and white, 'us' versus 'them'. But instead should inspire respectful, inclusive and transparent discourse, challenges and hopefully positive change, for all our sakes.

Through the lens of Islam I was granted a grace to see things in a new light. This holiday season I am grateful as I turn again to the blessings of life, food and especially meat-moved by some sharp, swift and worshipful moments-majestic and dignified. 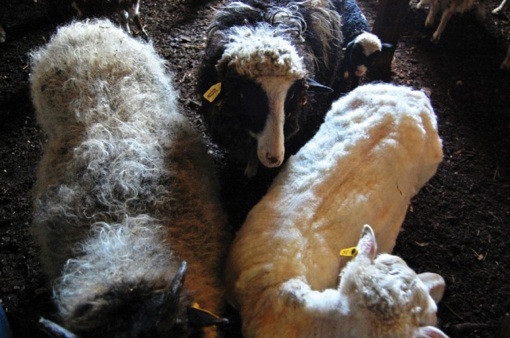