The Salar de Uyuni, located in Bolivia, is the largest salt flat in the world. Measuring in at over 4,000 square miles, the Salar was once part of a prehistoric salt lake that covered much of Southwestern Bolivia. The lake dried up, leaving a massive layer of salt crust almost 12,000 feet above sea level. The enchanting (and precarious) natural wonder -- don't try crossing it without sunglasses -- is one of the most savage and surreal destinations on Earth. 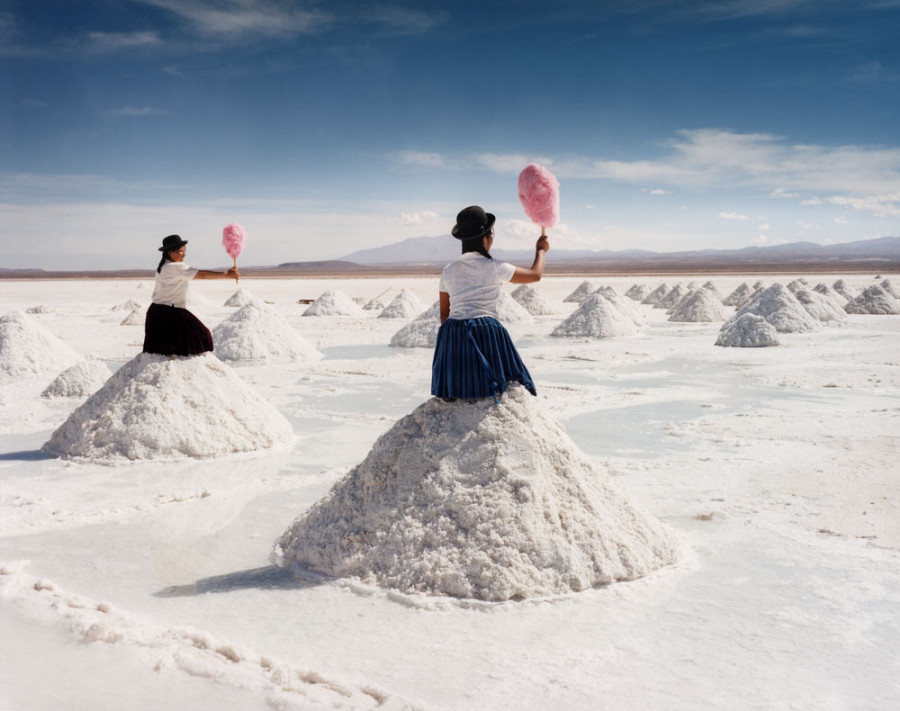 Photographer Scarlett Hooft Graafland only adds to the uncanny aura of the landscape, staging performances and photographing the results, all amidst the endless plane of blindingly bright salt. Using ordinary materials like pickup trucks, balloons, carpets and cotton candy, Graafland choreographs geometrically inclined scenarios that illuminate the uncanny powers of Mother Nature at her most peculiar.

The series, titled "Soft Horizons," blends the genres of photography, performance and land art, simultaneously raising environmental awareness while cracking visual jokes. The images are shot using an analogue medium format camera and none are digitally manipulated afterwards. "Actually I do not feel the urge to manipulate my images in a digital way," she explained to The Huffington Post. "I never felt attracted to those tools. Maybe because then the options would feel like, infinite. I like to work in a framework with the possibilities that are on the site. That also defines the work, and limits as well."

The otherworldly visions below look like the strange lovechild of National Geographic and Tim Burton. Mundane objects transform into magical oddities when dropped in an endless expanse of crunchy light. Take a look for yourself below.