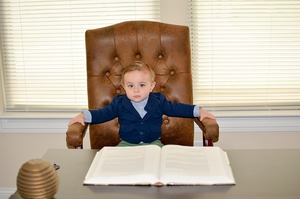 This morning my 2-year-old son woke up at 6:00 a.m. We did our normal routine which includes changing his diaper.

We then came into the living room to play. A few minutes later my little guy ran into his bedroom and yelled out, "two minutes!" That means he needs some privacy to go number 2 in his diaper. We're working on potty training.

So I give him two minutes to do his business.

He comes out a little later and stinks to high Heaven. So I calmly mention that we need to change his diaper, and at that point he shouts "no!" and runs away. Now, I know enough that if I chase him it will turn into a game and he'll be rewarded for yelling "no!"

I remain in the living room pretending I'm doing something really important and not even phased by his outburst. In reality, I'm trying to figure out my next move and how I am going to change his stinky butt changed with as little struggle as possible. I'm parent plotting.

Time goes on and he runs back to me and says "Hockey 'puter please." We have a computer/tablet that is just his and he can watch hockey on it. He's obsessed with hockey. It's the only thing that keeps his attention longer than three minutes.

So I say, "Well we need to change your stinky diaper first." He shakes his head as though he agrees and we're off to change his diaper, but when we get to his room he head dives into his bed and refuses. So I do the awesome parent thing and pick my battles. I just say "Ok, just let me know when you're ready."

I go back to the living room and pretend to be busy and totally fine with his stank butt.

About 10 minutes later he comes to me and says "Hockey 'puter please" and again I say, "Well we need to change your diaper first" and as he did last time he nods his head in agreement. We both walk into his room and he dives into his bed again.

But this time, my friends, mommy was smart. Before I went into his room I brought in his hockey computer. So when he dove into his bed and said "No!" I simply had to show him the tablet and say "Oh, I thought you wanted your hockey computer?"

He jumped out of bed with a big smile on his face and we proceeded to change that stank butt without further issue. He watched hockey and I cleaned up poo. What a trade-off.

What Does This Have to Do With Your Business?

Sometimes you have to show your possible client the thing they covet the most (the answer to their burning pain). Talking about it works, but standing in front of them and saying "Here it is!" is pretty powerful.

You can easily do this by showing them the physical product, but what if you sell a service?

Using images and videos of other people that achieved results with your business is a great way to prove your case. If you're just starting out in business and do not have testimonials then you can use your own personal story.

If you do not have images or video then use your words to paint the picture. Be vivid and picture a single person in your mind. Talk to that person. Be real and be friendly. Tell your story or your client's story in such a way that the person you're speaking to can imagine themselves getting the results.

Lastly, sales is a process and it's our job to see the person through that process and be there when they are ready to buy. Notice that I had to go through the roller coaster of emotions with my son before he was willing to take the next step and get what he wanted.

Sounds weird, right? Why do I have to convince him to get something he requested? This is the push and pull of the sales process.

That last paragraph is pretty important. Even though my son wanted the computer and asked me for it twice he still resisted. He was unwilling to do what I asked of him in order to get what he wanted, but once he saw it there in front of him he was more willing.

How can you show your potential clients what their life will be like when they hire you? How can you show them that you are the person to give them the results that they want and that you are willing to go through the process with them until they're ready to take the next step?

Kids are absolutely amazing at teaching us life lessons and if you look at it through a business lens then you can learn just as many lessons. 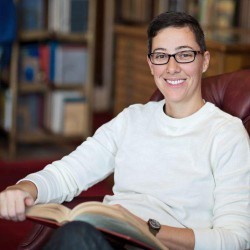 Lynn Coffey teaches health and fitness businesses how to naturally generate leads, sales and referrals without the stress of feeling icky, pushy, or like a used car salesman. Get her exact process by downloading her free 26 minute master class at http://LynnCoffey.com