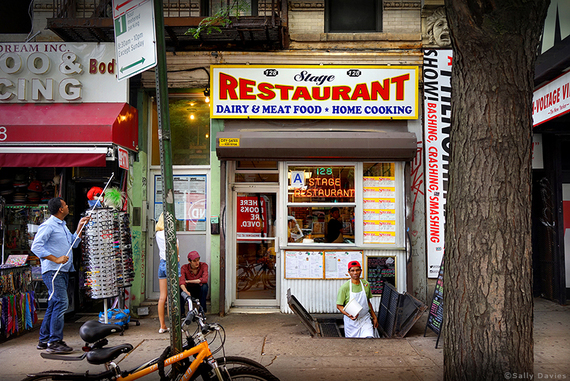 Color street photography has been around New York City since the very beginning - of color photography, I mean. Early proponents were people like Saul Leiter, Helen Levitt and Joel Meyerowitz. Sally Davies has been carrying on this tradition since the 80's here in New York City. Her work is vivid, fresh, and engaging. Almost like paintings, Sally's storefront images are little self-contained stories. Photo after photo, we read these images as if they were pages from a history book - they capture the spirit, the people, and the cityscape all at once. Sally's photos are good now, but I can only imagine how critical they will become with age. She has created both art and important historical documents in one - a real feat in photography. I recently spoke with Sally about her beginnings in photography, her gear, and being a woman in the art world.

Michael Sweet: Who is Sally Davies?

Sally Davies: I spent the first 7 years of my life growing up in rural Midwest Canada, in an existential crisis. Keenly aware that I was not like other people, I was a 4 year old already planning her get-a-way.

Walking the 2 miles to school, in 35 below zero every day, I wondered how far I would get if I made a run for it.

Somewhere around my 12th birthday I had the revelation that no one was like anyone. And that epiphany got me through a few more years there. 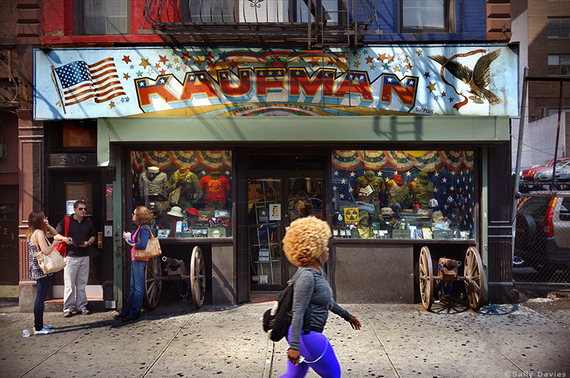 Michael: How did you get involved in photography?

Sally: My father gave me a camera when I was 15. He was an amateur photographer and thought it might be something we could share. He loved to take me to cemeteries and photograph the headstones while he made up stories about the dead.

I loved it right from the start. I started taking pictures then and have never stopped really. 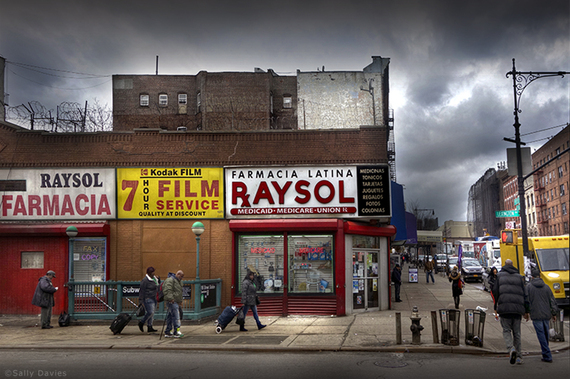 Michael: Photography has and in many ways still is dominated by men, how have you found this aspect of the photography world?

Sally: I am reminded of the inequality every time I consider my gender's inclusion at a museum show or a gallery, particularly at auction. The bias is reflected in sale prices a well. Numbers don't lie. So, you can cave and stop what you are trying to do, or you can suck it up and keep working. I choose to keep working.

Sally: No one gets up and says "I'm going to be the storefront girl". Authentic work is organic. You pay attention, but you also stop thinking in a way. You let the force be with you. Living in Manhattan's East Village is not like living in a residential suburb. When I walk around with my camera, the buildings that I walk by all have storefronts on the ground level. That's how it is here. That's what I am looking at all the time. How the people in the neighborhood engage with the local commerce is impossible to avoid when your shooting here. And these days, the gentrification is nowhere more obvious than in the changing storefronts. 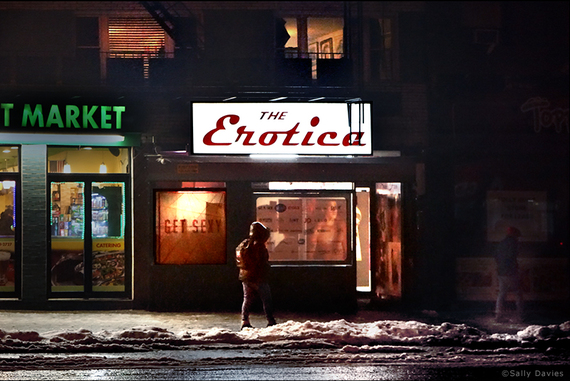 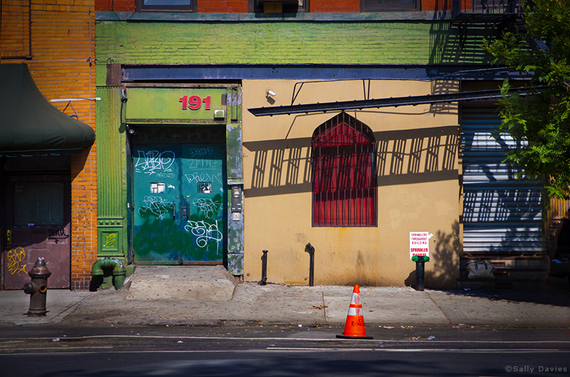 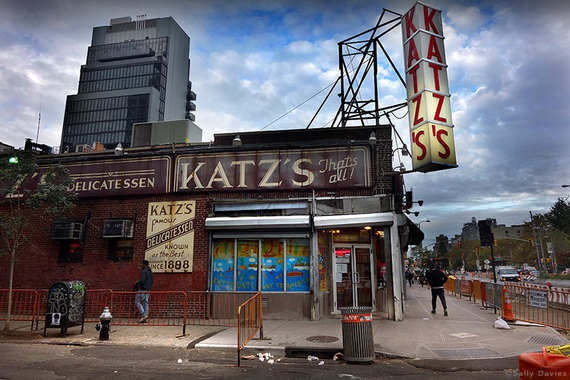 Michael: I see in some of your photography there are no people. Yet, when choosing photos for this piece I was naturally drawn to the images with people somewhere in the frame. I'm not sure why we find urban images more compelling with people, but I know that we do. What are you feelings on this?

Sally: A person in a photograph changes everything. It opens up a whole emotional can of worms. And I like that. It gives the viewer a different point of view. There is a story there all of a sudden. We are emotional creatures. We want a narrative. I am telling my story, hopefully leaving an emotional footprint for the viewer... that's how art goes.

Michael: What kind of equipment do you use?

Sally: I am not a big equipment person. A few years ago I had a major back injury. For 2 years I could barely walk around the block. I had to either give up the photography or buy something that was as small as the palm of my hand. I bought a Sony RX100 and have never looked back. It changed my work as well. It became like my eyes. No equipment necessary...the photographs got more intimate and allowed me to shoot in places I could not shoot before. Eventually, I added a Sony A7R to the kit bag. I used the 7R for the large format photos in my current show. I am a Sony convert. 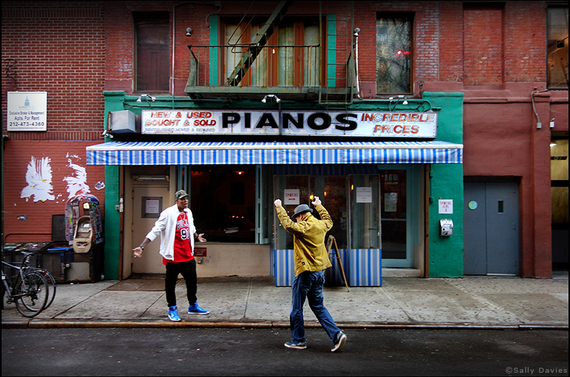 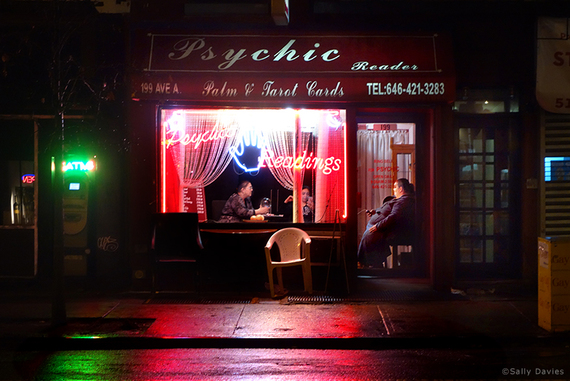 Michael: Interesting that you should mention the RX100 as I am contemplating the purchase of one right now. I guess I know what your advice would be (laughing). Maybe Sony will start sponsoring you? Moving along, you shoot a lot of color. Woody Allen once proclaimed New York as a black and white city. What do you think?

Sally: "Reality is a many splendored thing"...so it's whatever our vision tell us it is. I shoot black and white also, but it does not compare to my color work. I think Woody's New York is Black and White. I think Sally's New York is Color.

Michael: Good answer. I'm a bit all over the place here, but what's the point of your work? By this I mean why do you photograph? Is there something political, or purely aesthetic? What make the photographs you make?

Sally: I'm not interested in a big situation. I'm looking for a glimpse of the small, the every day... for the tiniest slice of the giant pie. There is mystery in the familiar, if you keep going back.

At this point in my life, photography is merely an addiction. I cannot leave my apartment without a camera. I cannot go anywhere without shooting. Everything I look at is being framed by my brain and edited. I live it, I breath it, I sleep with it...I have stopped trying to explain it. You can only do so many things in one life, and this is what I am going to do. 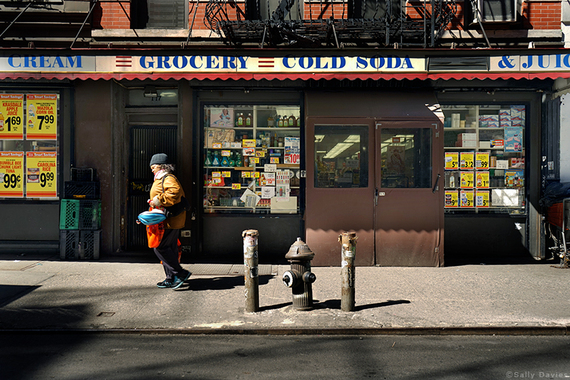 Michael: If this doesn't work out, what is your plan B?

Sally: There is no plan B.

Michael: Sally, thank you for your time and for this great interview. I am a fan of your work and it is my honor to help do my little part in sending it out into the world. Until next time.

Sally: And thank you for thinking of me, Michael. Maybe we'll bump into each other on the boardwalk. 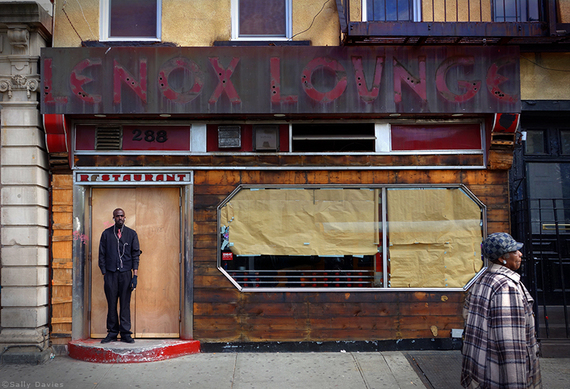 Sally Davies has lived and worked in NYC's East Village since 1983, and has exhibited extensively. Her current show "New York at Night" at the Bernarducci Meisel Gallery (37 W 57th ST NYC) is on exhibit until July 17th. Follow Sally through her website or on 500px.com.

Michael Ernest Sweet is a New York-based writer and photographer. Michael has two full-length photography monographs in print, "The Human Fragment" and "Michael Sweet's Coney Island" both from Brooklyn Arts Press. Follow Michael through his website or on Twitter.