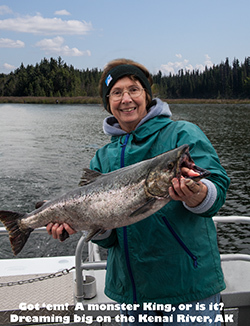 Here's what it's like fishing the Kenai River: Since 4 a.m., you've been straddling a narrow path on the edge of a rushing current, your back against a steep slope of hard-packed mud. There's barely room to swing the rod, your feet are wet and you can forget about a place to sit.

An average joe, you're thinking ahead, hoping to fill the freezer to last the winter. With the rod in hand, you swinging it at lightning speed, two casts a minute, a side-hand jerk that drops the hook in mid-stream down into schools of "reds" (sockeye) swimming upriver to spawn. 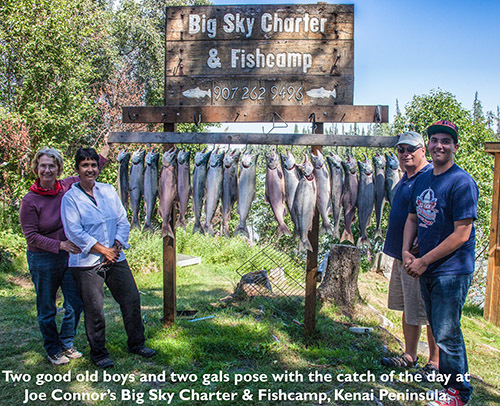 "The fish aren't hungry, but when they see that hook slide by, some'll take a swipe at it," said Joe Connors, whose Big Sky Charter & Fish Camp, with cottages on a private stretch of the Kenai River bank, in Sterling, puts single-minded fisherman at the heart of the action. "When you feel it pull, yank it hard." 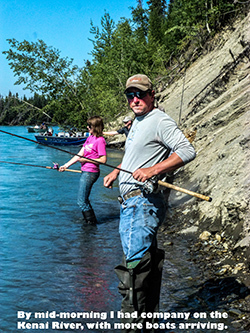 By 9 a.m., the public stretches of the Kenai, on Alaska's Kenai Peninsula, are overrun with fishermen standing 20 feet apart, check to jowl on the mud, between the bushes and in the shallows. It's crazy, chaotic and exciting, a tradition that no "sourdough," aka card-carrying Alaska resident, would miss. But for "cheechakos" like us, visiting Alaska with our kids, eight hours was enough. By mid-afternoon we were done and ready to go when the guide and motorboat came to pick us up.

"The fish are there if you're patient," said Joe, when we walked over from Bill White's camp next door, the Alaska Sports Lodge, where we stayed for three nights in late July. Both Connors and White rent cottages, arrange guides, lend rods and reels to their guests and provide docks tethered to the river bank, an easier way to fish. Connors also sells Alaska fishing licenses, so our river adventure was a convenient, one-stop deal. 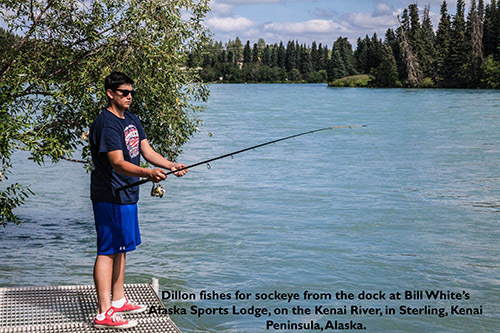 Determined, we managed to catch 21 sockeye between the five of us, a feat to brag on, sitting around the campfire at day's end with the other good old boys. Regaling novices with tales of previous season's trophy kings (Chinooks), 60- and 70-pounders, they kept us hoping. But the kings were few while we there. With the commercial fishing industry also working the mouths of the Kenai and Kasilof Rivers, setting giant nets to ensnare tens of thousands of sockeye heading upstream to spawn, they also snare some kings. Caught and killed, the kings never make it upstream where anglers are waiting. Worse, they don't reach their spawning grounds to reproduce. It's a tragedy that demands a remedy. 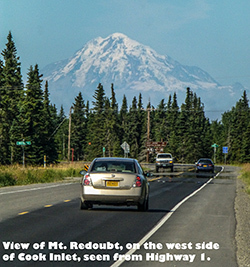 Occasional anglers like us don't add much to the economy, But the community consensus is that it's trophy sportsmen with deep pockets, fishermen who fly in from Germany, Japan and Florida, who support the Kenai Peninsula's economy. Avid trophy hunters, they rent SUVs, lease lodging, hire guides and motorboats, buy licenses and use local cold plants to freeze and ship fish home. They dine out at restaurants, buy snacks, groceries, beer and souvenirs, and invest in the latest fishing gear. Their dollars are spread all over the community, in contrast to the fishing industry, which supports itself and its workers. 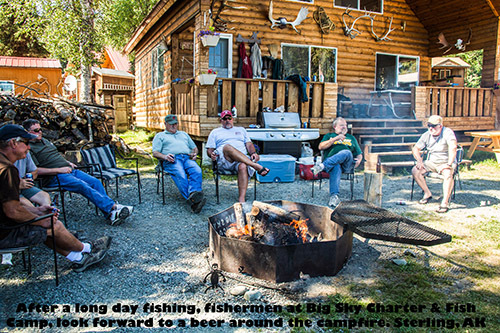 As much fun as the fishing was, it was just a small part of our tour of the tour of the Kenai Peninsula. A mountain wilderness as spectacular as the Tetons and as big as Massachusetts and Connecticut put together, the Kenai is remarkably varied, with a taste of the wonders you'll find elsewhere in Alaska. Here, however, it's in one place, close enough to see in a week, and a couple of hours' drive from Anchorage. There's pre-European and pioneer history, adventure sports, hiking trails, glaciers, bays full of marine mammals and fish, roaring rivers to float or raft, bears, birds, hotels, comfortable lodges, rustic cabins and fresh seafood restaurants on every coast and in every town. 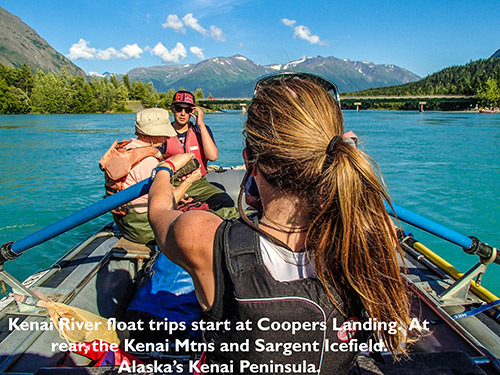 The Kenai is an Alaska album, an ideal destination for first time visitors, from your kids (as ours were), to yours. We planned a week on the ground, rented a car and covered a lot of ground. Too much, actually. But our photos keep it alive: the glacier-viewing cruise, the flightseeing, bear watching, a river float, eagles and whales, museums and aquariums, the sea lions in Resurrection Bay and the puffins in Kachemak Bay. And there were the Russian churches and hand-painted Easter eggs, the boardwalk on the Homer Spit, and fresh seafood, with crabs legs, grilled salmon, halibut steaks, and for a quick bite, fish and chips. A staple on every menu, they make it with halibut, our favorite and more expensive, and with fresh cod. The kids preferred the cod. Go figure.

We spent our last long day driving back to Anchorage and the airport for the flight back to L.A. Passing now now-familiar names and places, I stopped counting how many times a voice from the back seat piped up, "I remember that place; let's go back there next time." 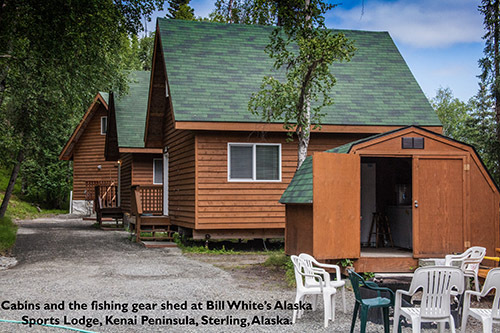 IF YOU GO: Visit Anchorage at www.anchorage.net, or call (907)257-2363. For the Kenai Peninsula: www.kenaipeninsula.org. For lodging, go to the Seward Windsong Lodge at www.sewardwindsong.com; to www.alaskasportslodge.com; and to www.kenaiguide.com. For river rafting and floats; to www.AlaskaRiverAdventures.com.