The curtain is falling on Speight Jenkins' 30-year tenure as General Director of the Seattle Opera. He is not just one of the giants of the opera world -- Evans Mirages, artistic director of Cincinnati Opera, has called him "one of the finest opera impresarios on the planet," for example -- he is also a consummate gentleman, a model of erudition (he has forgotten more about opera than most people know), and a champion of excellence and fiscal probity. I also count him as a mentor, and am proud of the relationship that we forged during the course of bringing Amelia, the opera that he commissioned me to compose for his company, from a handful of ideas (in my earliest pitches to him "a surreal pageant about the notion of flight as metaphor for the human condition") to the stage. 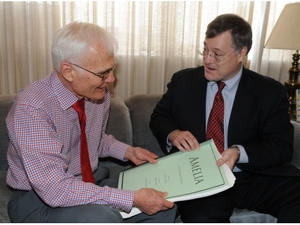 "I'm writing to you," wrote Speight to me in November 2003, "to find out if A) you are interested in writing an opera for Seattle; and B) what your ideas for such an opera might be. My first interest is in the music; the crucial factor in any opera is the music."

It was as though Zeus had reached out of the radio (I'll never forget his periodic appearances on the Metropolitan Opera Quiz) and into my workshop. I wrote back immediately, as an opera composer must:

Yes! I have five ideas brewing at the moment: 1) The Brothers Karamazov -- perhaps the time is ripe for an adaptation? 2) Tet. I have wanted for fifteen years to write an opera that would take place during the Tet Offensive. Current political events have sadly brought home the fact that this subject is of perennial relevance ... I'm currently most intrigued by the idea of using found texts (letters, news reports, oral histories) bound together by actual events. 3) Last of the Mohicans. Paul Muldoon (with whom I have written three operas) and I have already hammered out a treatment; I love working with him and think that you would, too. 4) The Oldest Living Confederate Widow Tells All. Allan Gurganus is willing to adapt his novel for me, should we go in this direction. 5) Much Ado. I've got twenty minutes of a first act already done... how about setting it in present-day Seattle?

The next day, he wrote back: "Whatever happens about the opera, your joie de vivre and enthusiasm for what you do are both infectious. It would be fun to talk. Call me anytime you want to."

Thus began an epistolary relationship that endures, more or less, to this day. We went to see Anna in the Tropics together on Broadway and thought better of having a go at it, I pitched The Third Man to him. I learned about what would fly on the main stage of a 2500-seat opera house; Speight learned about me. We realized together that, although adaptations of plays, books, and movies would be easier to market, an original story would require "deeper digging," and result in a more daring final product. In the process, we learned how to trust one another.

After six months, running out of ideas, I reached into a drawer and pulled out a treatment for Icarus Flies, an opera that would generate its non-linear narrative through the juxtaposition of "found texts." The overall tone, I wrote, would be more like a "pensive pageant" than a traditional narrative opera. It is called Icarus Flies, and here is what I have in mind, scene by scene...

Guarded interest. In May 2004, he wrote back, "I think the problem is to find a through line, a story, as it were, and something to which the audience can connect more than just events. What do you think?" Hours later, by email, I shot back: "The most obvious gambit is this: Amelia Earhart becomes the baseline of the opera, which becomes Amelia's Song -- an opera about the last few hours of her life.

We moved past exploration and into development. "We have to find a fine poet for this libretto, a person with a real lyric gift. I don't have any suggestions, unfortunately. But I think that's essential."

Events accelerated. I knew, of course, exactly whom I wanted:

My first instinct -- which I really trust -- is to invite the New York poet Gardner McFall to write the libretto," I wrote. "We met at Yaddo 20 years ago, and I set some of her poetry at that time. ... She is very much a part of the group of poets and writers who love, support, and write opera. Her book The Pilot's Daughter was written in memory of her father, lost over Vietnam. Flight has figured centrally in her imagery for many years (Uncanny, isn't it?). I also find her work to be intensely lyrical; it inspires me greatly.

Speight loved Gardner's work. Sensitive to his audiences' needs, he pressed for a slightly more linear narrative. I asked Gardner, and with her blessing, integrated a stylized telling of her own life story into the treatment on which I had first sold Speight. That story gave the pageant at least one through-story around which various realities and chronologies could congeal in Amelia's mind. Over the next year or so, the work gradually unfolded.

On a rainy afternoon in September 2007, I played through the opera -- which I had composed into vocal score -- for Speight. "You've thrilled me," he announced. I've never been so proud to be a composer as I was at that instant.

Followed a workshop, with changes and improvements, and the enormously time-consuming process of orchestrating the opera. Speight pushed the tiller strongly only once, when he asked me to "warm up" the harmonic language of the opening of the opera. "I want it to be more traditionally lovely at the start," he said. "She's a little girl, singing, as you say 'an apostrophe to the stars.' Would she really sing such harmonically sophisticated music?" It was too early in the opera, I realized, for the orchestra (that is, the composer) to begin making "adult" commentary on her; it had to be one with her, at least at the beginning. That level of psychological acuity is typical of Speight's tenure as impresario and man. I made the change, the only one he ever asked for in the score, and have never regretted it.

I've written elsewhere about the May 2010 night the curtain first rose on Amelia. I have moved on to other operas, collaborated with other producers. But Speight took me in hand at a crucial point in my development as an opera composer, and not just reinforced, but galvanized my commitment to the vital relevance of not just opera as living drama, but as the Mount Everest of composer challenges, the gesamtkunstwerk against which all other musical efforts are, in the end, measured. Since then, Amelia has slowly grown legs, and has enjoyed several revivals. She'll grow stronger with time, because she's true and good, honest, sincere, and brave -- just like the man who commissioned her.