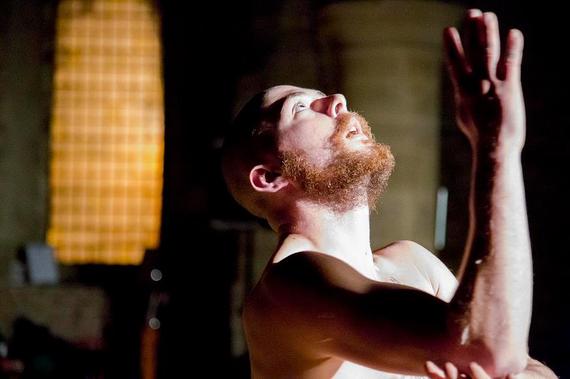 Joss Carter in Salvation
Formerly, sinful digression resulted in the degradation of one's esteem, body, or integrity. And so salvation was sought through self-inflicted pain and suffering. Today, degrading one's self is all the rage, and is achieved through social media and bad manners, no longer hidden behind a vale of shame. Salvation's 'pain' today comes as hateful anonymous comments to posts; and ultimate suffering for sins comes in the form of public melt-downs, or precipitous falling from great heights of power, prestige and riches. But where is Salvation?

In his recent performance art tour de force, Joss Carter presents Salvation. This work is meticulously put together, deeply researched, and brilliantly effective. Superlatives seem inadequate, and the message of his vision is so vitally important that the only way to expose this work is to share it, to describe it. 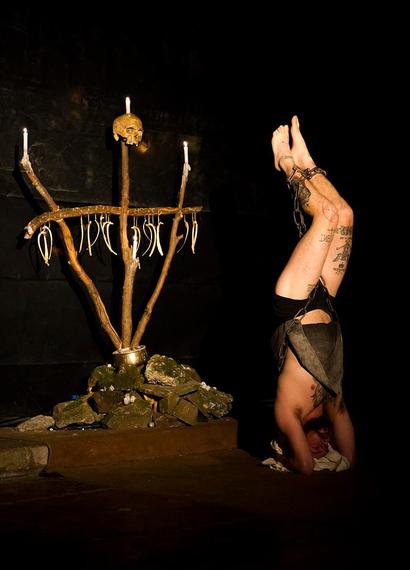 Joss Carter, as Man, is inverted next to the Altar
Joss Carter, in his recent work Salvation, represents mankind (Man) on a march through antiquity of self-inflicted pain, all believed to render the body broken but the soul cleansed. By doing so Carter asks some profound questions. What is the cost of salvation for today's sins, and what exactly are those sins? If, in retrospect, historical measures seem extreme and de trop, does this mean we are exempt from current sins?

Salvation is uncomfortable to watch, like the evening news or shameless current political races. In Carter's Salvation, it becomes supremely challenging when spectators are asked to cast stones at Man, returning us to our roots in the public annihilation of convicted criminals. 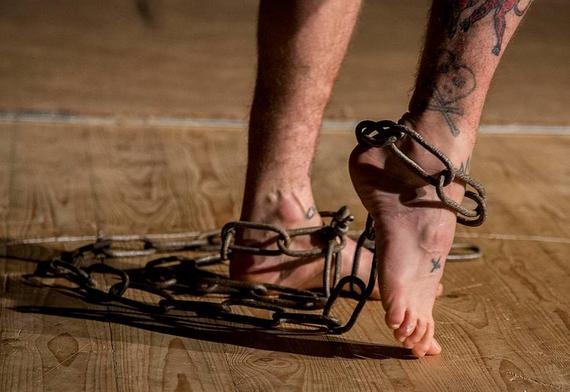 Enchained at the ankles, in tattered cloth before an altar of bone ribs hanging from a log cross topped by a human skull, the bald and beaten Man emerges. Slowly, willfully inverting, he moves to rest on head and elbows, weary legs reaching upward, suspending himself. For more than ten minutes the trembling flesh of these young legs, with toes twitching as if a vibration caused by the minute muscular activity required to sustain inversion, all very far beyond our own presumed limitations of endurance.

We watch, and by witnessing Kathak-paced unfoldment of elective self-punishment we are driven to reflect within. What begins as spectacle, transforms to a catalyst for sympathy, then empathy and ultimately self-evaluation. Music of drums, cello and strings builds to a throbbing crescendo, yet does not end, but quietly returns to its place of origin, subtly enacting the cyclical nature of all things, beaconing us to remember past lessons. 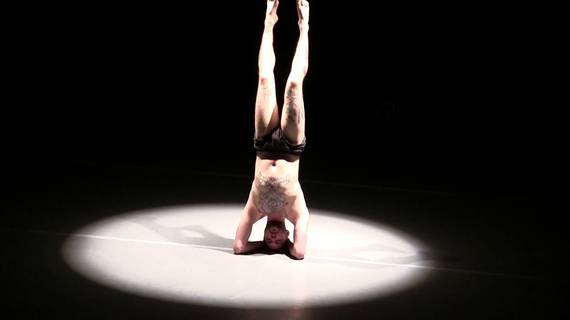 Unsteadily Man gives in to gravity, and unwinds the thick ankle chains, yet leaves them cuffed. What we endure in the name of salvation, we are taught, is necessary because of what Man is, what Man does. So Man starts a slow, feeble walk toward us, and arrives addressing us, his spectators. His hands, between prayer and scooping water, reach outward, begging. This pitiful creature implores us for salvation, asks for understanding, kindness, and help. 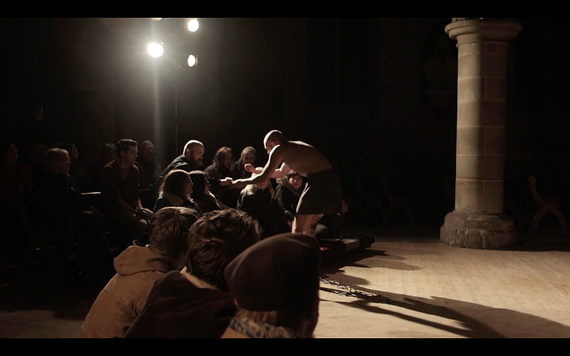 Man's hands reach out with palsied tremors beseeching, begging both cowardly and forceful. He is met by some outstretched hands, not many, of those willing to give, touch, comfort, or support. Man passes manna of nourishment only to those who can care. Most are passed by, some rejected, but from a few their reciprocated offer is hungrily snatched and gobbled, with feral protective posture in retreat. 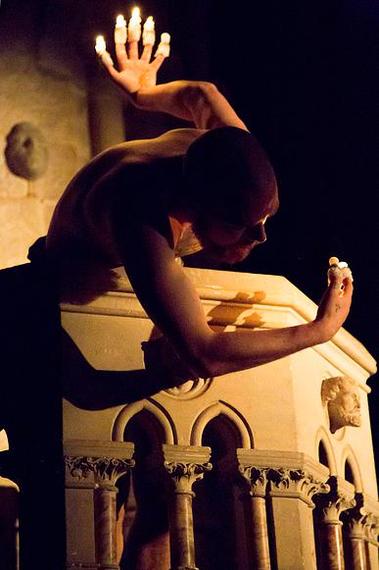 Man Preaches with Fingers of Fire

Man returns to the altar, accompanied by whispered chanting, and ascends the stone pulpit to deliver a movement sermon on salvation. His fingertips are lit candles, and his sermon is delivered in flame, ending suddenly in darkness and the sound of the heavy chains of enslavement. 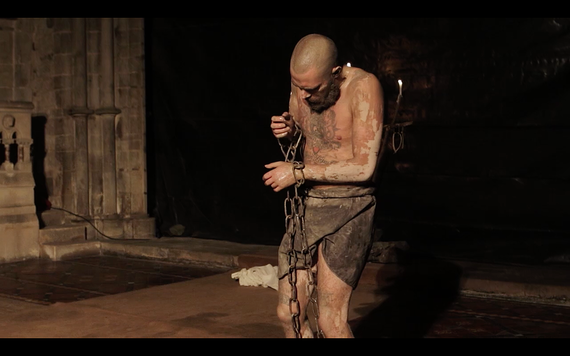 Man is Bound by Chains of Oppression

Light returns and Man enters the era of the complex science of religious salvation. He gathers stones, holds them high, and loses his grip so they fall on his bald head. We see Man's pain, and as the stones bounce randomly, he frantically circles each with chalk and consumes the stone. Ritual bells ring with light, magical tinkling in some unknown pattern. The ritual repeats, and chalk this time connects the old and new locations, as if by marking these relationships a pattern might be seen. The bells tinkle, and lower ones gong as this ritual repeats, faster, with more random relationships being marked and studied. 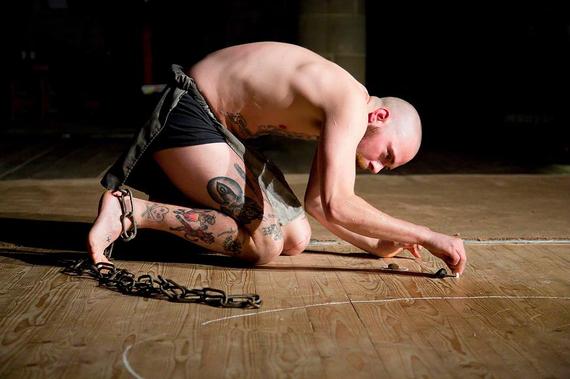 Salvation now rests on divining patterns observed from being stoned, and we are taken back to the desert cults of salvation in northern Africa and the Middle East where the origins of modern belief were born. Man seeks an answer from these patterns, the frenzy, and the chaos. Yet there is no answer, just a history of ritual.
The stones are gone, but imprinted in memory. Chains again, now tightly circling ankles, as Man marches in militaristic rotation, as a new era of symbolic actions become the focus of the Man's efforts. Bells clang in cacophonic disarray and movements are frenzied. But they are hollow, and have served their purpose. 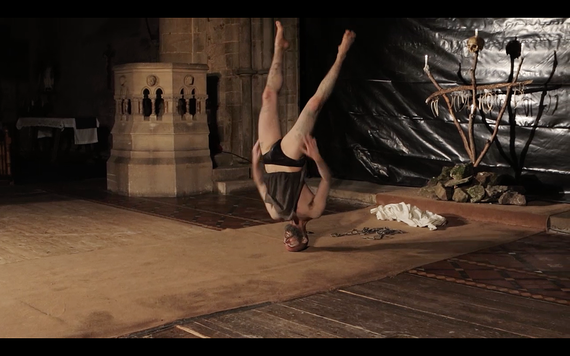 With salvation still beyond reach, Man's era of cleansing begins. Both washing away and anointing one's self with sacred mud and waters, Man seeks salvation anew. Every part of Man is washed, blessed, and anointed, including his chains. Yet man is fundamentally flawed, and no amount of washing or anointing will work. 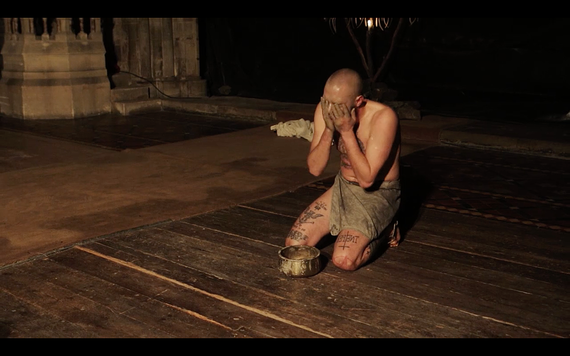 Man Washes Away his Sins

Punishment follows the cleansing era, and severe applications of grace become the tool. Eyes cast to heaven, understanding self-inflicted punishment is in the name of divinity, Man flails, becoming ever more entangled in his chains.

Man next attacks his chains, frantically trying to free himself. His whimpering frustration and sighs of fatigue become a soprano descant to thrumming of chains, the result of his attempt still featuring chains. Using hands, legs and teeth, clever Man now frees himself, lastly removing them from his neck. Kneeling before his altar he then beats himself with his chains. Whipping his own back, legs, torso, clever Man has put his chains to work. And leaves them behind. 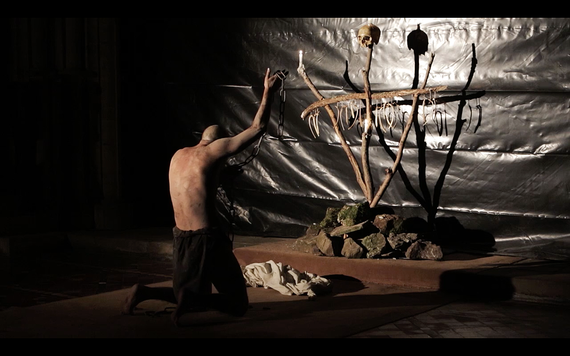 Fear of the Divine now dominates Man. Fighting the gravity of human life and leaning for support on church pillars, Man seeks further as chanting begins. Wordless toning becomes the backdrop in this attempt at salvation. But relying on the pillars of the church only leads to Man falling further. Chants, again in cacophonic crescendo, includes barking dogs, screams, and crazed laughs--the sounds of humanity, of life. Man dismantles his altar to finds the head of a pig beneath, which he dons. Man remembers his inversed beginning to this quest and all of its phases, but finds no peace. He is beaten, and in Job-like words implores us to save ourselves, for he cannot save himself. Man asks for release from pain, as we cast stones at him. Having exposed truth, Man finds his efforts at salvation futile. Body broken, soul weary, man collapses in defeat. Salvation is not. 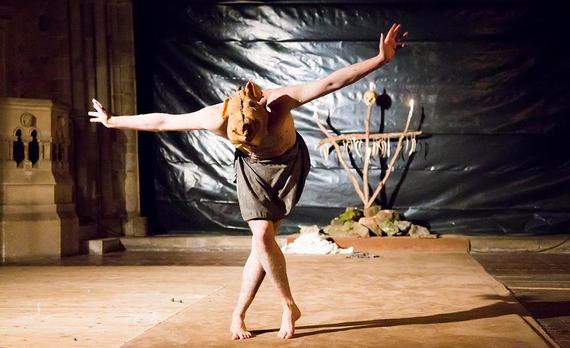