MarketWatch: How much would you pay for a cold one, that's best served at room temp?

The pitch: If your idea of a "cold one" is a dollar-draft special at the corner tavern, Samuel Adams's Utopias is probably not your pour. But that's almost the point: The craft-beer-maker has positioned Utopias, which is released approximately every two years in limited quantities, as the cognac of brewskis, a $190 bottle of beer that's more like a fine brandy and comes bottled in a commemorative black decanter. Sam Adams touts that Utopias is made "with the world's finest, all-natural ingredients," including specialty malts and hops. The noncarbonated dark beer -- actually, a blend of several beers -- is also aged using "a variety of wood barrels" sourced from areas as far-flung as Nicaragua and Kentucky. The end result is a brew with "sweet flavors of honey, toffee, caramel, cocoa and vanilla, balanced by distinct notes of molasses, raisins, plums and berries," according to the beer-maker.

The reality: Calling Utopias a beer is a bit like calling a Lamborghini a form of transportation. It's a brew more by the textbook definition -- "Beer is fermented grain," says Samuel Adams founder Jim Koch -- than by the everyday drinker's definition. And forget about the whole "cold one" thing as well: Koch enjoys his Utopias at room temperature. As for the taste, the beer with the big price tag (and the high alcohol content -- 29%, compared with the 5% of, say, good old Budweiser) is indeed comparable with some other popular after-dinner drinks. Little wonder that Koch likes to showcase Utopias in blind taste-tests alongside a $300 port and a $500 cognac; he says it wins nearly every time. Beer connoisseurs (aka "hop heads") have shared his enthusiasm -- to a point: "This is a very good drink, though it's not exactly beer in the classical sense of the word," writes one reviewer at BeerAdvocate magazine's website. And from a ranking standpoint, Utopias barely cracks the magazine's Top 100 list -- it's in the 89th spot, putting it far below brews that are a fraction of the price. But as Koch points out, since Utopias meets the legal definition of beer, it does come with a built-in savings of sorts -- at least in states where bottle-deposit laws apply. "It's a $190 bottle, but you can get a nickel back," he says. 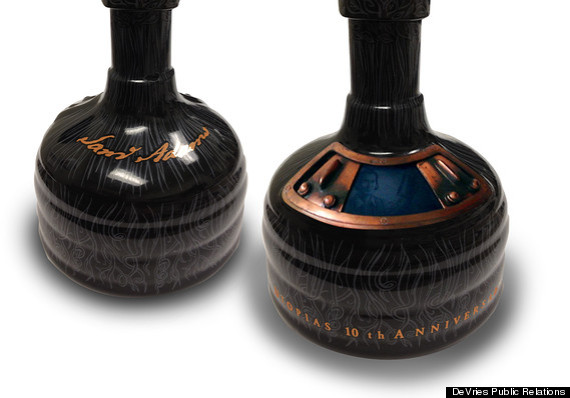