"Like the moon on the water, in a way. When you confront a Zen master, what you're really seeing are not his limitations but yours." -- Pico Iyer

There are forms of meditation rooted in the real world, grounded in the rituals of handmade industry. There are realms of spirituality in art that you are able to perceive though there be no content in the image to prove it. There are some kinds of art-making mediums, the mastery of which consists of giving up trying to master them. These kinds of esoteric riddles are nothing new to Sam Erenberg, whose career in performance art, filmmaking, painting, video and bookmaking has often brought him into contact with challenging materials and immutable forces. Erenberg has always been interested in finding ways of fusing Eastern and Western impulses in image, philosophy and object: in picture, story and script. In many ways, his long-standing interest in tantric mathematics and other aspects of Eastern thought prepared him for the compositional and process skirmishes that resulted in the watercolor on paper and oil on canvas paintings exhibited in this exhibition. 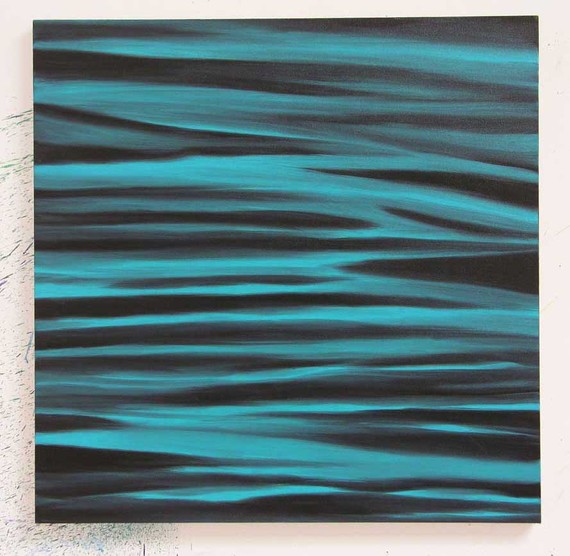 The paradoxes animating these paintings demonstrate an exotic character, an Asian ambiance alternating with tribal sensibilities. All these works, the majority of which have never been shown before, were made around 2006-07 during and after a short trip to Japan, where Erenberg attended the famous paper-making workshop in Awa. Both a place and a cultural landmark, the Awagami factory is synonymous with the artisanal achievements in paper-making its founders and heirs have pursued for generations. The place offers a variety of techniques for producing papers of eccentric appeal, as well as a gorgeous location and encouragement to experiment. So what does a painter do when confronted with so much paper? He makes watercolors. He makes a lot of watercolors. 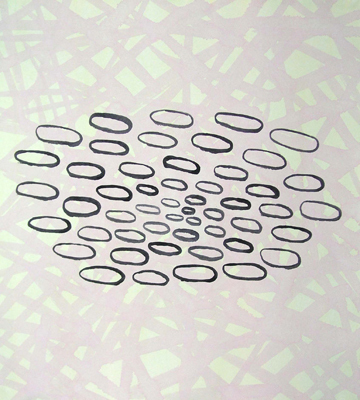 These works are influenced by conventions of landscape composition as well as by experience of the Japanese countryside but remain tenaciously abstract. Vertically oriented so the landscape prism becomes ambiguous, most of the work is made by festooning instances from Erenberg's lexicon of abstract forms across color-wash grounds of tertiary chromatic nuance. His discs, mitochondria, triangles, snaking lines and gestural lattice work all exist within a reductive but evocative framework that gives structure to the imaginary, but orderly, universe of sight and thought that Erenberg visits in the studio. With little or no pictorial space, the works nevertheless are geological. Organic and fractal, they reference the kind of landscape that can't be rendered or depicted, but instead must be re-created by replicating in paint the processes of the natural world itself. His favored droplets with luminous aureoles, schematic backgrounds like melting plaid, patinated and palimpsestic surfaces, and finally the lovely, emotional, yet totally artificial colors all contribute to and undermine the unlikely naturalism of this work.

Every sheet of paper made using the analog processes Awagami offers comes out differently; no two are alike. And watercolor is famously difficult to control, precluding revision and rewarding confidence, quick instinct. Like in nature, there are rules for making paper and for using watercolor -- but following those rules does not guarantee predictability, so Erenberg doesn't really bother following them. Because of the vagaries of the materials, the watercolors were forged in a complex algorithm between chaos and control. Peter Frank has dubbed Erenberg's practice "Zen Judaism," because Erenberg is prolific, yet he thinks things through and exhibits patience and in executing his complex plans. He has repeatedly taken up the struggles between materialism and conceptualism, abstraction and depiction, the external, observed world and the life of the mind and spirit.

"Pleasure to me is wonder -- the unexplored, the unexpected, the thing that is hidden and the changeless thing that lurks behind superficial mutability." -- HP Lovecraft

All of that happened in about four days in Awa. After he came home, Erenberg tried to keep up with the watercolors, which had acquired a certain meditative quality during his immersion. But he admits that they entirely failed, as though the processes were somehow alchemically rooted to the place he had left. It has been an experiment in the value of both paying deep attention and welcoming the unknowable; a matter of becoming further acquainted with the physical laws that govern the non-material universe. In that respect, it was entirely a success. It was then that he started the oil on canvas works also exhibited here, which were all made within about a year of his return. 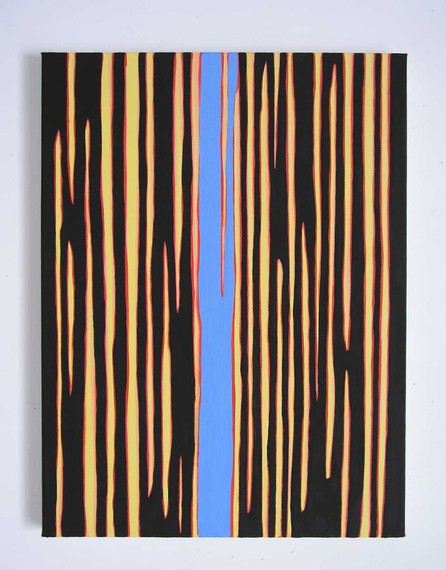 Not all of the works reference Japan; some reference Africa and others noir cinema and gothic poetry -- the titles tell those tales. But there are certain predominant visual themes that recur and mutate across all these paintings that are largely rooted in the same lexicon of nature-based abstraction that animate the watercolors. They are larger -- some are vast by comparison. And the blacks are inkier; the surface topographies built from the impasto of pigment layers instead of the grittiness of porous pulped Kozo bark. But because of deracinating cropping, flatness of pictorial space, luminosity of underpainting, cyclical asymmetry, and the intrusions of geometry into the organic like an imaginary ocean lapping against an ephemeral shore -- because of this one senses a self-sufficient cosmology that sustains the whole even as it wobbles between the seen and the dreamed.

In the expansive painting Asia, there is sky reflected in water, and a breeze ripples across a passage of ruffled waves. It is luminous, yet there is no light source. It is flat like a photograph or a textile, with no horizon or dry edge of land, yet it recedes and moves the eye. In the end, its arrangements of blue, black and red are entirely abstract, and the evocative illusion soon dissipates against the ineffable fact that it is not a pastoral seascape, but in fact a modern abstract painting. This gentle tug-of-war between the observed and the concocted, experienced and imagined, real real and imaginary real plays out again and again in these paintings. In the epic five-panel Sun Salutation, a vibrato of strings stretches like an equalizer graphic across the panels, expressing a pattern that is rhythmic but not linear, structured but impossible. The composition of the striking canvas Haida runs along a lattice of orange on mustard layered over with variegated green. This structure draws elements from the watercolors as well, but in a volatile recombination that gives it a heft and depth that both enhances its physicality and distances it from the organic world. Some paintings, like Nubia, Blackboard Jungle, Strange Fruit and The Creeping Unknown, have a viral, Candyland, biological or aerial feel and employ a stricter palette of mostly black, white and red that takes them still further over the border between direct and liminal experience. Yet in the crisply swelling Tenryuji Pond Temple it seems possible to discern a picture of rain falling at night, embodied by a series of illuminated dots that migrated directly from the watercolors -- along with the sense memory of what it was like where he was when he was making them.

Sam Erenberg: Awa, is on view at the College of the Canyons through March 14. A conversation with the artist happens Wednesday, February 19, at 2pm. 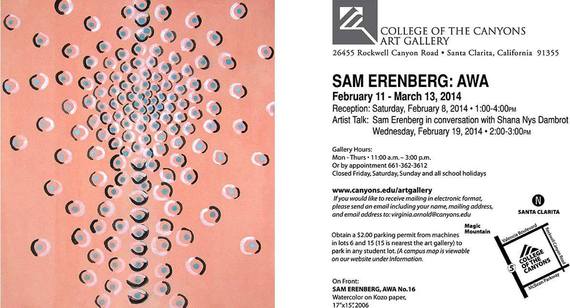