Just like traveling home for the holidays: you see old friends, you run into ones you had forgotten about, and you get introduced to some new ones. That's the experience of "Sam Francis: Five Decades of Abstract Expressionism from California Collections," co-curated by Peter Selz and Debra Burchett-Lere for the Pasadena Museum of California Art.

It's a judiciously chosen show, with a fantastic installation that presents the work to remarkably good effect. This being a show of pieces culled from California collections (significant work is shown here but other iconic pieces are all over the world), there's the excitement of finding pieces you wouldn't otherwise normally see. It's grouped chronologically by era to show development but the show doesn't feel in the least didactic; it feels more like firework displays set in proximate though discrete locations, the sum effect being one huge simultaneous extravaganza of color and space. At the end of the gallery are the later works, large, all Untitled. If there's a Sam Francis brand, it's these pieces: airy, expansive, with a lot of white space that nicely sets off the bands of brightly colored splashes and splats. They're like routes on maps, reasonably rectilinear journeys balanced with intuitive excursions and delightful, spontaneous discoveries. If life is a map (discovery, presentation), then Sam Francis is a master cartographer.

Other pieces are set off in series. There's "Jungian Studies 1970-79," there's "LA Light 1960-69," and a lot of earliest work. They occupy alcoves that you enter almost by accident, having been drawn like a magpie to the larger pieces at the end of the gallery. As you wend back toward the exit, you're not a little surprised by these serendipitous encounters.

But the two most interesting sets of work, overlooked because you beeline to the large pieces at the end of the gallery, are set in alcoves opposite the entrance. Perhaps just as remarkable as the pieces themselves are, both sets were painted when the artist was, to put it mildly, physically challenged. On the left, among other pieces, are a couple of paintings, small, incredibly expressionistic, that Francis made at the end of his life. Painted when he was confined to the use of but one arm (think Matisse, on a far more intimate scale), these little gems are globular and roiling, rainbow lava, the kind of thing you could imagine Van Gogh doing had he faced a less sudden decline in his artistic powers.

On the right is Francis' earliest work, landscapes that look more like pieces for the Works Progress Administration than like an embryonic stage of what was to come. Even then the brushstroke was far from tentative; more remarkable, though, is that Francis painted them lying on his belly as he recuperated from a back injury. Again, think Matisse: art as therapy, both physical and emotional.

"Sam Francis: Five Decades of Abstract Expressionism from California Collections" offers a grand treat for the holiday season. Along with the pieces that have assured him a prominent place in the artistic firmament, you get to see a lot of work (a couple of near-monochromes, a couple of portraits) that doesn't get displayed that often. The exhibition also reminds you that not all Abstract Expressionist work is full of Cedar Tavern Sturm und Drang angst.

The exhibition runs through January 5, 2014. Museum hours are 12-5pm, Wednesday through Sunday, and 5-8pm the third Thursday of each month. Admission is $7 adults, $5, seniors and students. There is no charge the first Friday and the third Thursday of each month. The Museum is located at 490 East Union Street, Pasadena, CA 91101. For more information, call (626) 568-3665 or visit http://pmcaonline.org/. 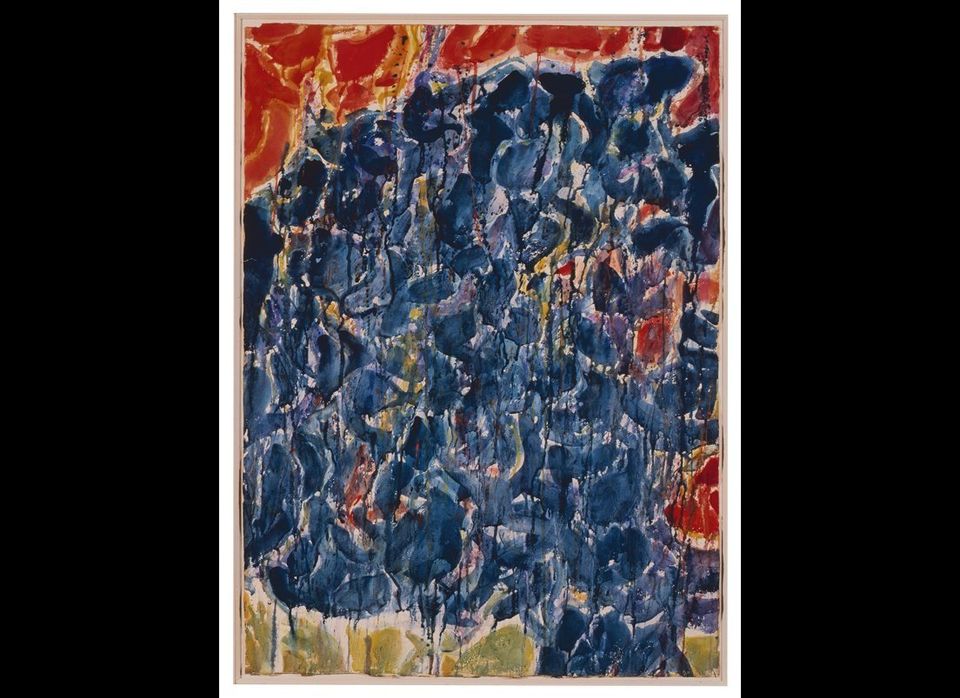