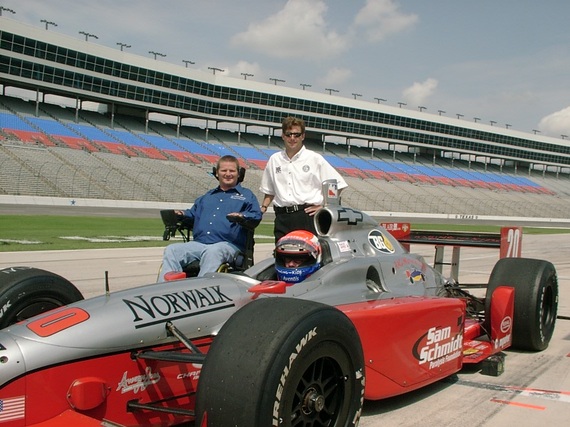 Earlier this summer I ran into an old friend at the Pocono 500: Sam Schmidt.

In an accident qualifying for an IndyCar race at Walt Disney World Speedway in 2000, Sam became a quadriplegic. His car spun coming off turn two and backed into the concrete retaining wall, injuring Sam's spine between the third and fourth vertebrae. A rising star driver at the time, his racing career was over at just 35.

Fast-forward 14 years. From a wheelchair Sam, 49, has built a successful IndyCar team, Schmidt Peterson Hamilton Motorsports. In 2011 one of his drivers, Alex Tagliani, won the coveted pole for the Indianapolis 500, an amazing feat given the big-name teams with whom he was competing -- Andretti Autosport, Team Penske, Chip Ganassi Racing. It was David versus Goliath, and Goliath blinked.

My own connection with Sam is more personal. Twelve years ago he allowed me to live out a boyhood dream of averaging a 200-mph lap in an Indy car, a risky proposition even for pro drivers. I was just an adventure journalist but got hooked on the idea as a youngster in 1977 when Tom Sneva averaged the first 200-mph lap at Indianapolis, a barrier once thought impenetrable.

I still remember my big moment with Sam as if yesterday. In 2002, we had organized the event as a fundraiser -- half the funds would go to his foundation, half to Racing for Kids, another motor-sports charity.

Critical to the event was that all racing equipment be donated, ensuring 100 percent of cash raised would go to the charities. Eddie Gossage, manager of Texas Motor Speedway, donated track time; Robbie Buhl, an IndyCar racer, donated his experience and racing helmet/radio/suit; Firestone donated the racing slicks and, most importantly, Sam donated use of his Indy car and the Treadway Racing pit crew.

Texas is a track I knew well from my training at the Mario Andretti Racing Experience. I had set records for the school there, but a 200-mph average would mean getting around the 1.455-mile oval in under 27 seconds, a big, daunting number.

I ran my first laps slow to get a feel for Sam's car. On the fourth lap, I brought it up to 185 mph on the back-straight and it felt solid -- incredibly fast, but solid. I experimented with my racing line, too, finding that the low one best suited my driving style, came in to pit lane for final adjustments and then it was time for the real run.

I figured it would take me 10 laps to work up to 200 mph, so my plan was to pick up the pace by a second or two each lap. That way the speed comes gradually, hypnotically. On the fifth lap, I saw the speedometer flash 200 mph at the end of the front-straight. That boosted my confidence. But the goal was to average 200, a more difficult proposition, and that meant keeping the high speed all the way through the corners, banked at 24 degrees.

I squeezed the throttle more and had a "moment" in turn one when the car got high. I didn't panic, though, and kept the higher line through turn two.

After a few more laps I heard the words, "199.4," crackle over the radio. I was close. I matted the throttle between turns one and two and held it down the back-straight and well into turn three. Intense G-forces siphoned the blood from my head, limiting peripheral vision. I was on the edge, and had no time to glance at anything but the videogame-like track ahead rushing at me. After crossing the start/finish line I heard Sam's welcomed words, "Pit, pit, pit -- you did it!"

I backed off and a powerful combination of joy and relief overcame me. Those few moments, alone in the car, were some of the best in my life. Not just that, but two deserving charities were $20,000 richer. (Later telemetry showed I had run the last lap in 26.034 seconds for an average speed of 201.2 mph.) 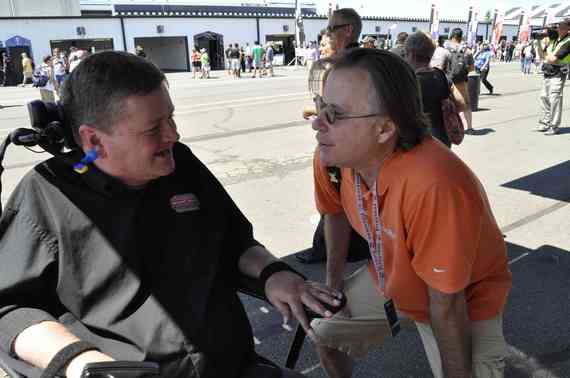 Now flash-forward again to 2014. In May, Sam did something he probably never thought he would do again: Drive a lap at the Indianapolis Motor Speedway, but this time in a specially prepared Corvette Stingray that allowed him to control car functions with his head. To the delight of fans and on ABC television, Sam roared down the front straight at 106 mph -- not 225 mph like in the old days, but surely more moving to the millions watching, maybe even to Sam.

"If given the option, I certainly wouldn't want to be in this [wheel]chair," Sam said recently in an interview. "But I know because I'm in this chair, I'm able to help thousands of people with our foundation and still participate in a sport I love."

We hear you, Sam. Thanks for the personal memories. And, more importantly, thanks for continuing to make a big difference in this world. You truly are special.