We learned a lot from a 22-year-old woman who tried to storm the field at a University of Iowa football game over the weekend.

What do you get when you're arrested at a college game, blow a .341 BAC and then tweet about it? Why, your very own commemorative T-shirt, of course.

Samantha Lynn Goudie -- Twitter alias @Vodka_Samm -- allegedly tried to jump onto the field during the Northern Illinois-Iowa game in Iowa City on Saturday. University of Iowa police collared her and gave her a breathalyzer test, on which she blew a preliminary .341.

Deadspin tracked down Goudie's mug shot, which shows her standing next to an officer who looks none too impressed. (story continues below) 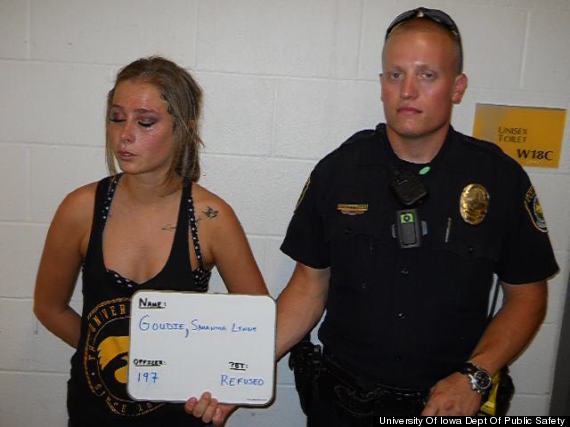 But Goudie wasn't done. When she was released from the slammer, she took to Twitter:

I'm going to get .341 tattooed on me because its so epic

Several Vines also remain. This one was tagged "alcoholism."

Previously: Here's a closer look at that Twitter profile photo:

The Internet welcomed her with open arms. After the T-shirt and plenty of mocking tweets, the memes started rolling in:

The legal threshold for intoxication is .08 percent BAC. The lethal limit falls between 0.40 percent and 0.50 percent, according to a Clemson University's Redfern Health Center website.

The site notes, at a mere .30 percent BAC, "You’re probably in a stupor. You have little comprehension of where you are or what’s really going on around you. You may suddenly pass out and be difficult to awaken." At .35 percent, "you may stop breathing."