WASHINGTON -- In an unusual break from the Obama administration’s de facto policy of not discussing details of the emerging nuclear agreement with Iran, U.S. Ambassador to the United Nations Samantha Power vowed that any sanctions relief provided to Iran could be reinstated without unanimous support from the UN Security Council.

“We will retain the ability to snap back multilateral sanctions architecture back in place, without Russian or Chinese support,” Power told members of the House Foreign Affairs Committee on Tuesday morning, referring to the two countries most likely to block sanctions against Iran.

“While I can’t get into the specifics of the mechanism right now, because we’re at a very delicate stage in the negotiations, and all of this is being worked through to the finest detail, I can say number one: Congress will be briefed as soon as the deal is done, if it gets done,” she continued. “And number two: we will not support a snap-back mechanism or an agreement that includes a snap-back mechanism that leaves us vulnerable.”

Iran, the U.S. and its five negotiating partners are nearing a June 30 deadline to reach a nuclear agreement, which would require Iran to significantly scale back its nuclear program in exchange for sanctions relief. Throughout the talks, the U.S. has insisted that any sanctions relief be automatically reversible if Iran is found to be in violation of its obligations under the deal.

However, Russia and China, two of the U.S.’s negotiating partners, have objected to any automaticity on reimposing UN sanctions, claiming it would undermine their inherent veto power as permanent members of the Security Council. Over the past several weeks, members of Congress have said that if Russia and China, countries that are weary of the existing sanctions regime against Iran, can unilaterally block the reimplementation of UN sanctions, Iran will have less incentive to abide by the terms of a final nuclear deal.

Power’s assurance to lawmakers on Tuesday is the first public indication from the Obama administration that the U.S., Britain, France, Germany, Russia and China -- the six powers negotiating the nuclear deal with Iran -- have reached an agreement on how to snap back into place sanctions imposed by the UN.

Speaking at an Atlantic Council event last month, French Ambassador to the U.S. Gérard Araud said that the French negotiators had floated a mechanism to reverse the veto power. In other words, lifted UN sanctions would be automatically restored in the event of Iranian noncompliance, unless there was a vote to keep the sanctions relief in place -- and that vote would be subject to a veto.

Reuters first reported that the six countries agreed to automatically reimpose UN sanctions if Iran were to be found guilty of cheating on the terms of the nuclear deal -- however, it remains unclear how the six countries will reach an agreement on whether or not Iran violated its nuclear obligations.

According to Reuters, the International Atomic Energy Agency will report suspected violations to an arbitration panel, consisting of Iran and its six negotiating partners, who will issue a non-binding statement on the alleged violation.

From there, predicts Jamal Abdi, the policy director at the National Iranian American Council, the non-binding resolution may be referred to the entire UN Security Council, where a simple majority vote could determine whether Iran has violated the terms of the deal.

“Based on what the French ambassador said at the Atlantic event, and based on what the Russians have said is their red line -- needing some Security Council process -- my interpretation of the tea leaves is that there would be some kind of vote,” said Abdi.

There is still no public indication of whether Iran would agree to a deal in which Russia or China could not veto the reimposition of UN sanctions. “I think that it will be viewed as tolerable. What Iran has really responded with is, ‘If you are so concerned with snap-back of sanctions, we are going to concern ourselves with the snap-back of our nuclear program,’” said Abdi. “It’s about there being an equal playing field so that both sides feel like they have significant incentives to maintain the deal.”

The final details of how multilateral sanctions will be reapplied if the Iranians violate the deal is likely to be a key sticking point in Congress, where lawmakers will have at least 30 days to review the nuclear agreement. At the end of their review period, lawmakers have the option of passing a resolution of disapproval on the lifting of any congressionally enacted sanctions -- although it is unlikely that the resolution will get the two-thirds majority vote needed to overturn a presidential veto.

On Tuesday, Power told the House Foreign Affairs Committee that lawmakers would be briefed on the technical details of snap-back sanctions if and when the negotiators reach a deal. “That was not exactly what I wanted to hear,” Rep. Ted Deutch (D-Fla.) told The Huffington Post, referring to the timing of the promised briefing. “I think those consultations should take place in large part over the next couple of weeks leading up to the June 30 date so that no one is surprised when we reach that deadline.”

In the past, the White House has dispatched Treasury Secretary Jack Lew and Energy Secretary Ernest Moniz to Capitol Hill to brief lawmakers on classified aspects of the nuclear talks. “I don’t think there’s anything scheduled now,” said Deutch. “And now is precisely the time we should be having those briefings.”

U.S. Official: Iran Sanctions Could Be Snapped Back Without Approval Of Russia Or China
United Nations General Assembly 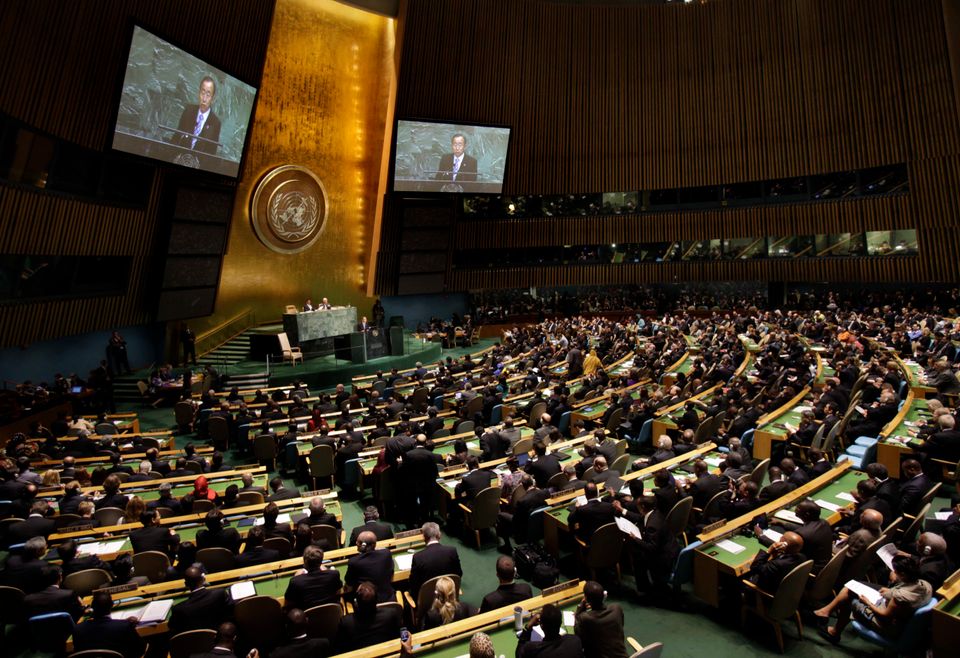