On June 26, the Supreme Court made the landmark decisionto legalize gay marriage nationwide. At the time, the court said it was granting same-sex couples “equal dignity in the eyes of the law.”

But as this recent video of two men being denied a marriage license in Kentucky shows, not all couples are being granted this right.

David Moore and his fiancé have been together for 17 years, and have lived in Rowan County, Kentucky for 10. “We feel it’s our right as citizens, according to the Supreme Court and according to the governor of Kentucky, that we should be able to get married,” said the couple in a video uploaded to YouTube Tuesday.

The video, which has been watched more than a million times to date, shows the couple going to the Rowan County clerk’s office in the hopes of acquiring a marriage license. They, however, are told by an employee behind a counter that because of a “choice” made by Rowan County Clerk Kim Davis, they would not be able to get a license there.

“You can go to any other county and get your marriage license, we’re just not doing it at this time,” she said to the couple, as a police officer looked closely on.

Davis has said that her Christian beliefs prevent her from abiding by the Supreme Court ruling. The clerk told The Associated Press that she will no longer be issuing marriage licenses to couples -- gay or straight.

“It’s a deep-rooted conviction; my conscience won’t allow me to do that,” she said. “It goes against everything I hold dear, everything sacred in my life.”

Davis herself appears at the end of the video, which was filmed Monday. As a screenshot from the clip shows, the clerk insisted that the camera be switched off -- a demand that Moore (pictured below) complied with. 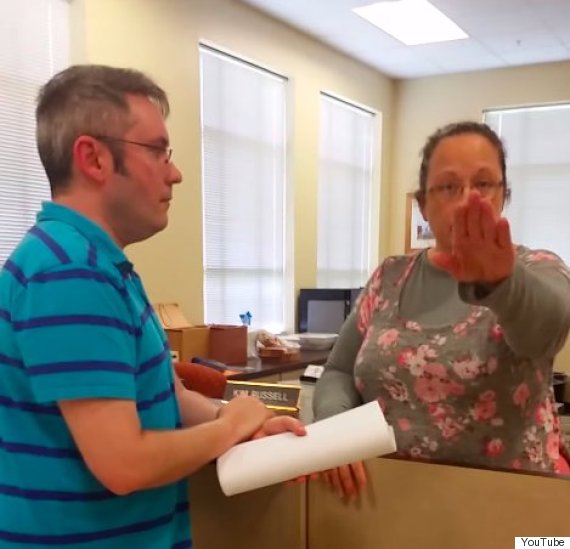 The American Civil Liberties Union of Kentucky has filed a lawsuit against Davis on behalf of two homosexual and two heterosexual couples who were denied marriage licenses.

“Ms. Davis has the absolute right to believe whatever she wants about God, faith, and religion, but as a government official who swore an oath to uphold the law, she cannot pick and choose who she is going to serve, or which duties her office will perform based on her religious beliefs,” ACLU attorney Laura Landenwich said.

Davis is among a small number of clerks and judges across the South who have refused to comply with the Supreme Court's ruling.