Is anyone else annoyed by the homophobic support of same-sex marriage that's out there? I am.

You know what I'm talking about. I've seen a lot of this little number on Facebook lately: 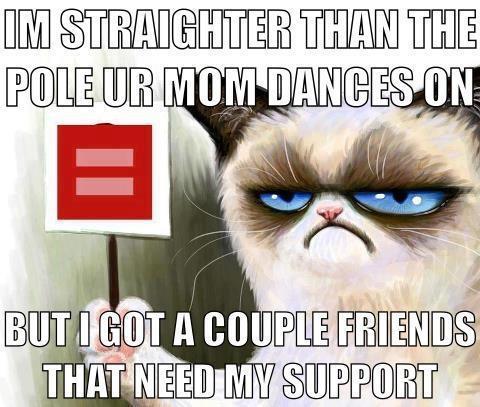 Apparently, in a lot of ignorant people's minds, if you come out in support of same-sex marriage, you're just straight up "coming out," and that's really stupid.

Put it into perspective: It's as if people who were opposed to segregation in the 60s would've said the following: "You know, I'm not black and all, but I'm cool if 'they' sit on the bus in the same seats as me... but I'm definitely not black... just to let you know... but yeah...same seats."

"I'm all for women voting, but I definitely have a penis. I mean, yeah, they should be able to vote or something, but that doesn't mean I'm going to be cooking and cleaning the house, I'm still going to be the bread winner here."

See how ignorant that sounds? That's what you're doing.

My favorite high school advisor was a gay man who changed my opinion on a lot of things. I was a super-conservative-to-the-point-of-ignorant young adult in high school and after I graduated, he actually came out to me because he was afraid that I would have judged him based on who he was -- something that my version of the Christianity wouldn't do, but a lot of people's Christianity would.

I'll never forget when he told me that he was gay and asked me if it changed my opinion of him. I blew if off and immediately said, "No. Why would it?" And in fact it didn't, but what it did do was change my view of the world. People are going to love who they love and be who they are. There's nothing that any political ideal is going to do to change that.

So I say all that to say this: My support of same-sex marriage does make me the same as gay people: logical and accepting of others, and someone who doesn't judge another for who they choose to love.

But I'm also someone who chooses to judge based on stupidity, and am thusly calling all of you out for being homophobes who are so stupid as to think that your supporting marriage equality makes you gay.