Ted Olson, one of the lawyers in the landmark "Proposition 8" Supreme Court decision (Hollingsworth v. Perry), declared today that the "point of no return" on gay marriage has now passed. Indeed, it seems clear that the U.S. Supreme Court decision is signaling to the lower courts that it will not take up the issue of same-sex marriage any time soon, particularly if the lower courts continue striking down state marriage bans for same-sex couples.

As these state bans continue to fall, the federal government has announced that it would immediately begin recognizing same-sex marriages in all of 33 states. This decision follows the U.S. Supreme Court decision on the Defense of Marriage Act (DOMA) in 2013 (United States v. Windsor), which held that denying benefits to married same-sex couples was unconstitutional.

It is hard to believe that Congress enacted DOMA less than two decades ago. Right after that law went into effect, the Cooperative Institutional Research Program (CIRP) Freshman Survey at UCLA's Higher Education Research Institute began asking incoming freshmen their views on same-sex marriage. Since CIRP first started asking the question in 1997, a majority of incoming college students have agreed that same-sex couples have a legal right to marry; however, it is remarkable how strongly incoming students now endorse this position. The CIRP Freshman Survey last asked this question in 2012, and three-quarters of first-time, full-time students (75.1 percent) agreed that same-sex couples have a legal right to marry, and the data suggest that nearly all (91.1 percent) of students who identify as "liberal" or "far left" hold this view. 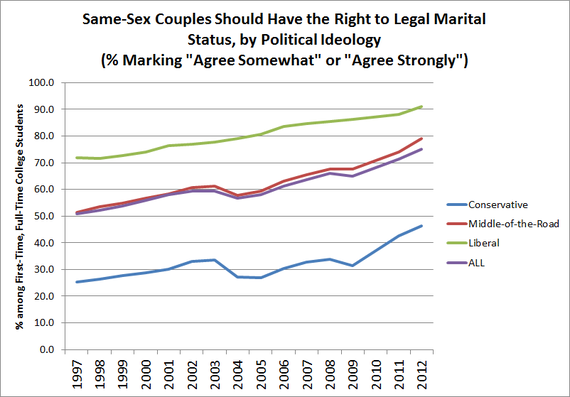 Support of same-sex marriage among "conservative" and "far right" students has increased more than 20 percentage points since the question first appeared on the CIRP Freshman Survey. A near majority (46.4 percent) of students who identify their political ideology as "conservative" or "far right" now agree that same-sex couples should be allowed to legally marry.

The largest gains in support of same-sex marriage have been among incoming students who identify their political ideology as "middle-of-the-road." In 1997, a bare majority (51.5 percent) believed same-sex couples should be permitted to marry. By 2008, more than two-thirds (67.7 percent) felt similarly, and that figure jumped another 10 percentages points by 2012 with 78.9 percent of "middle-of-the-road" students supporting same-sex marriage.

Today's college students do not just support same-sex marriage; they also support allowing gay and lesbian couples to adopt. In 2013, 83.3 percent of all first-time, full-time college students agreed that gays and lesbians should have the legal right to adopt children.

Most individuals are more than mere single-issue voters, but given these numbers, it is interesting that some politicians continue to focus so heavily on social issues like same-sex marriage. The recent spate of court decisions in favor of same-sex marriage in the past two years, and particularly in the past four weeks, has caught up with public opinion. The political views of today's college students increasingly suggest growing divide with the "culture wars" being waged by social conservatives. Candidates running for political office who continue to emphasize social questions while doing everything in their power to impede progress on an issue such as gay marriage risk alienating this large bloc of potential voters.