I'm leaving soon. My mother is worrying; she doesn't say much about it but she has been knitting me a lot of warm socks since I joined the expedition team. She is the foundation of why I am doing this, as has given me the gift of a beautiful way to view the world. That way of life is what now drives me to ski over a frozen ocean, to bring your millions of signatures to the North Pole.

My hope is that the Arctic Council officials at their meeting in Sweden the 15th of May will take effective action in ensuring the future of this majestic landscape. It cannot be done without a ban of destructive industries. And it needs to be done now. If I get to meet them at the North Pole, I will certainly say this directly to them. How auspicious that meeting would be!

As a Sami woman I live in a culture with close ties to the Arctic. Much of our traditional lands are above the polar circle. I also live in a culture where all questions are considered environmental questions. The environment touches on all aspects of our lives and surroundings. I was taught that if I show care for our nature, I also show care for myself and the people I love.

Now all of my friends and relatives are talking about climate change. It's a topic brought up during dinner, at parties, in school and at work. We are seeing the effect of climate change and it worries us deeply. The reindeer, the source of livelihood for many Sami, are having trouble finding food in these new conditions. The snow has started falling before the ice sets, which makes the ice weak and our winter landscapes unreliable. Warm periods are starting to occur in the midst of winter. In the old times we had systems to adapt to changes like this. If a resource went low, we could switch to another to let the first recover. But as the lands are becoming more and more scattered and poisoned by mines and other destructive industries, we are rapidly losing the possibility to adapt to changes. Sweden is now officially aiming to become the mining center of Europe. There is simply very little regard for our ties to the land, our human rights, and for sustainability.

The whole of the Arctic ecosystem is becoming more and more stressed in a situation where animals and nature also would need a chance to adapt to the climate change. Instead of creating that time for peace and research, governments and large companies are trying to push it even more. Oil drilling in the Arctic would only add to the climate change, not to mention that nobody knows how to separate oil from ice when a spill occurs. It would become an enormous ecological disaster and destroy the livelihoods for the Sami fishers on the coastline.

Together with other Indigenous and environmental activists I fight to prevent this from happening every day. The support that this expedition gives us is immense. This project is important for the Sami people. Millions of people are coming together and showing that they want the Arctic to be protected. Together we make it clear that the Arctic concerns people all over the world.

My father has all his life been a part of the worker's rights movement. He has shown me that the power in unity is so strong that together we can change even the most unlikely things. That it is worth to fight injustice.

I'm proud to be one of all the millions of us engaged in the saving of the Arctic. Thank you, Mom and Dad.

Sami Lessons in Caring for Nature and Love
North Pole 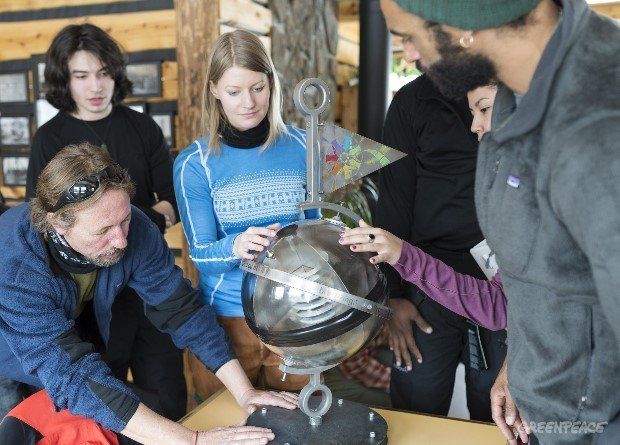