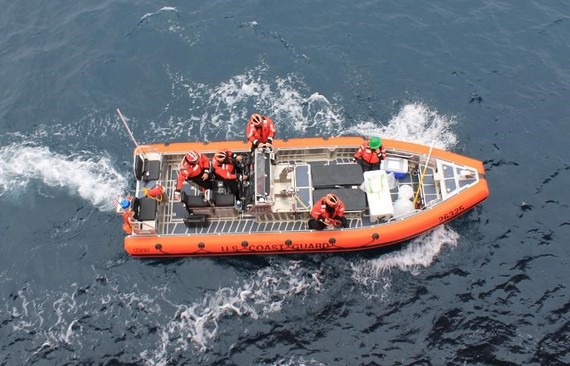 The most abundant elements in seawater are salt ions (sodium, chloride, sulfate, magnesium, calcium, etc.), and on average one liter of seawater contains 35 grams of dissolved salt (one liter of seawater weighs roughly 1000 grams so salinity is measured as parts per thousand). The GEOTRACES program specializes in measuring the least abundant elements in the ocean, referred to as "trace-elements." Concentrations of the trace-element mercury, for example, are often less than 0.000 000 000 200 grams dissolved in one liter of seawater (parts per trillion). From this perspective, finding a needle in a haystack sounds easier than searching for mercury in the ocean.

Because these elements are found at such low concentrations, even a small amount of contamination can significantly alter a sample. Collecting contamination-free samples is a delicate process - imagine the challenges that arise when looking for trace amounts of iron in seawater collected from a giant rusty ship! The GEOTRACES program has developed specific sampling protocols that include a number of inventive solutions such as plastic shower caps, Kevlar line, and hand carrying 4 ft long GoFlo bottles. The photos below outline the procedure for collecting contamination-free vertical profiles of seawater from the ocean surface to the ocean floor. 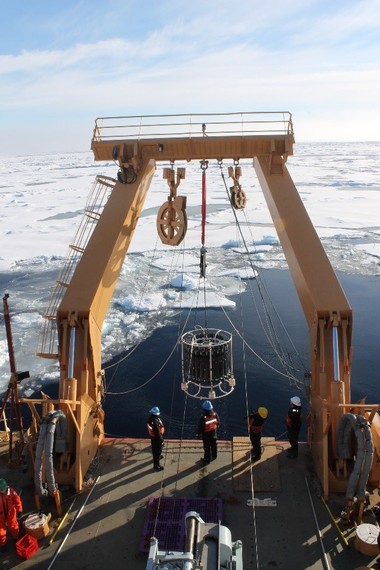 Full depth profiles are collected in specially designed GoFlo bottles. The bottles are long cylinders with openings at both ends and are lined with high quality plastic (Teflon) that can withstand acid-washing to remove contaminants. In this image the GoFlo bottles are attached a plastic-coated rosette for deployment off the aft deck. Top and bottom openings of each GoFlo bottle are covered with shower caps to prevent exposure to air contaminants; shower caps remain in place while the rosette is on deck and are removed immediately before deployment. The center of this console is equipped with CTD sensors to measure pressure, conductivity, and temperature. 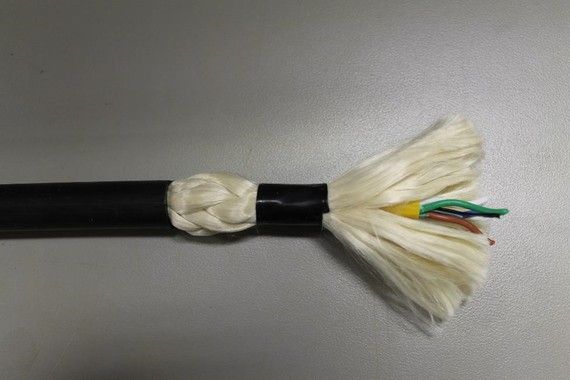 The rosette is suspended from a non-metal conducting cable (dissected version shown above). Internal wires allow transmission of data from the CTD to a computer onboard the ship, the white material is braided Kevlar that gives the cable strength, and the outer coating is polyester that creates a water-tight seal. 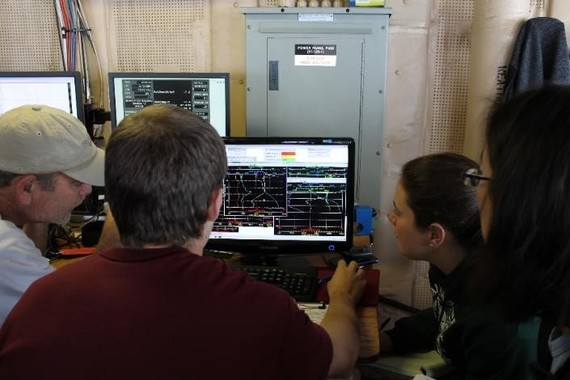 Inside the ship scientists watch a live feed from the CTD sensors which unveils the hydrography of the water column as the rosette descends to the bottom of the ocean. Using this information, the group selects water sampling depths to capture specific features such low salinity values that may indicate the presence of a specific water mass or maximum chlorophyll values where the most algae should be found. As the rosette ascends to the surface, the GoFlo bottles are electronically triggered to close, capturing up to 24 different depths in one cast. 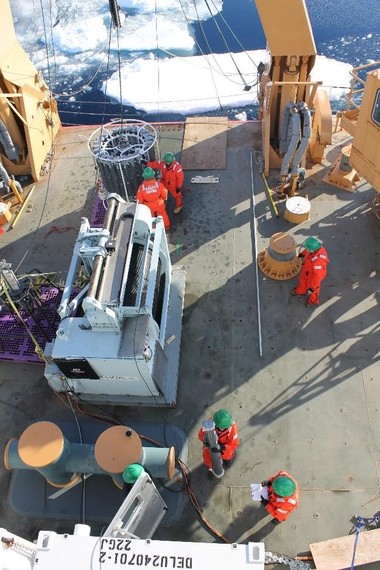 On deck each GoFlo bottle is detached from the rosette and carried by hand into a specially designed van that serves as a clean laboratory. HEPA filters push particle free-air into the van creating positive pressure that eliminates dust penetration and deck shoes are left outside to minimize contamination sources. 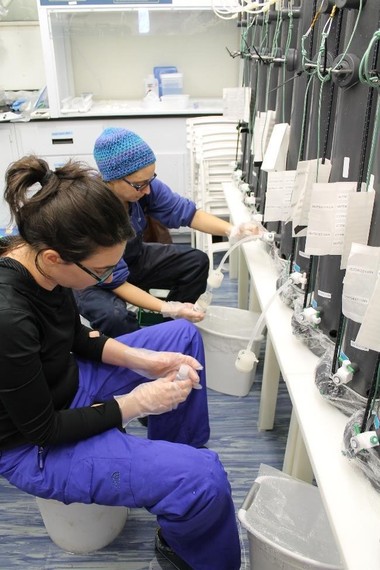 Inside the van each seawater sample is identified by a 5 digit code and filtered into pre-cleaned sample bottles. Some bottles are delivered to onboard laboratories where the samples are processed immediately, other bottles are preserved with acid and frozen for analysis months later back in onshore labs across the United States.