Samsung has taken the wraps off the Galaxy S III smartphone, the successor to the popular Galaxy S II.

At a flashy media event on Thursday in London, the company debuted its latest flagship phone, equipped with a 4.8-inch display capable of displaying content at up to 720p resolution, a quad-core Exynos CPU, an 8-megapixel rear-facing camera, a 1.9 megapixel front-facing camera, a choice of 16GB or 32GB storage, and much more. (According to The Verge, a 64GB version of the device will be coming later.)

Powered by Google's Android 4.0 OS (aka Ice Cream Sandwich), the Galaxy S III will also feature a Siri-like app called S Voice that lets the user dictate commands to the device. "If the alarm goes off and you need a bit more rest, you can say 'Snooze' to the phone. The feature can also be used to play songs, adjust volume, organize schedules and send e-mails," the New York Times reported, per a Samsung rep.

So far there is no official word on pricing or an exact release date, but the device will be available first in Europe at the end of May, according to Engadget's live blog of Samsung's event. The 4G version should make it to the U.S. in the summertime. [UPDATE: Samsung has said the Galaxy will go on sale on May 29 in Europe.]

Take a look at photos from the event, courtesy of Samsung's live stream: 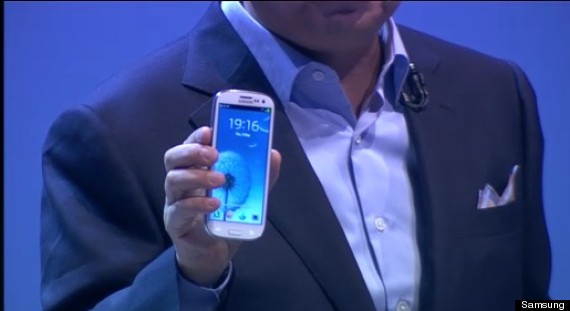 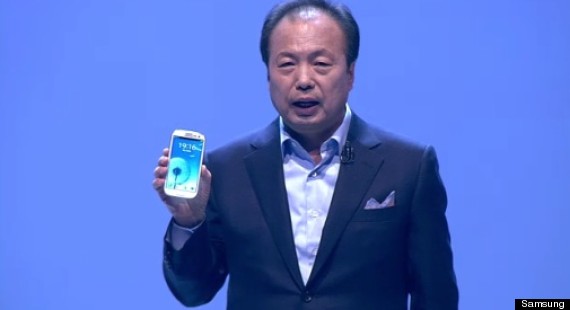 According to Engadget's live blog, the S III is 8.6mm thick and weighs 133 grams, which is only slightly heavier than the Galaxy S II. It also packs a beefy 2100mAh battery, which Gizmodo points out is the first time Samsung's equipped one of its smartphones with a battery this size.

JK Shin, Samsung's president and head of IT and mobile, said that the Galaxy S III's curved design was inspired by items in nature. The device will come in two colors: pebble blue and marble white.

Sources reportedly told The Verge that the device will land on Sprint in the U.S. The AP notes that the device's predecessor was available from all four major U.S. carriers.

The Samsung Galaxy S III is positively bursting with features. Check out the coolest ones here. Then, take a look at Samsung's gorgeous new commercial for the device.