This article was translated by The Huffington Post from an original report by Hankyoreh, HuffPost's local media partner in South Korea. The piece is part of Hankyoreh's larger series on the potential health impacts of the semiconductor industry on the children of its workers.

Over the past few years, Samsung Corporation has faced a number of troubling allegations about the health of some of its workers in the company's home base, South Korea.

Former workers and their families, along with labor activists, have said that conditions at the company's semiconductor factories have led to higher occurrences of illnesses such as leukemia and other cancers among former semiconductor workers.

In a new series, The Huffington Post Korea and its media partner, The Hankyoreh, report that long-term exposure to toxic chemicals may not only have lasting effects for some former Samsung workers, but also for their children.

The issue of reproductive toxicity, when children fall ill because of the accumulation of various toxic compounds over a long period in their parents' bodies, has not surfaced very often because many parents blame themselves and keep their children's condition hidden. It is difficult for those who often could not even fathom blaming their company for their own sicknesses to connect their children’s illnesses to their workplace.

Samsung Electronics and SK Hynix, world-class corporations and leaders of the Korean semiconductor industry, both deny the relationship between work conditions in semiconductor manufacturing and reproductive toxicity.

That reaction is similar to the first reports, in 2008, of "semiconductor industrial diseases" -- when former Samsung workers started attributing leukemia and other diseases they had developed to conditions in semiconductor factory work. While Samsung initially denied a link between the incidents and conditions at its plants, Korean courts ruled in several cases that former Samsung semiconductor workers with leukemia were victims of industrial accidents. The ubiquitous technology giant finally issued an apology in May 2014 to workers and their families, promising appropriate compensation to workers' families.

The Hankyoreh now follows the largely unreported story of the "tears of the semiconductor second generation." This story, the first installment of the series, explores the devastating narrative of one family’s struggle to survive in the face of chronic health problems created in the workplace. Pseudonyms are used for the names of everyone who appears in the article.

“A picture of my son’s first birthday? There is no such thing. I was too busy begging the doctors to save my child, bedridden in the hospital.”

Ms. Kim Hee-eun is 5'9''. The 42-year-old woman was born and raised on an island in Wando, in Korea’s South Jeolla Province, and lived there until she graduated high school. She was a healthy child and rarely went through any kind of sickness growing up. Now, she cried while she spoke about her 15-year-old son Gunoo, who was born in 1999. She spoke about the painful years Gunoo would face in the future, as the suffering he had endured for 15 years would continue for the rest of his life. 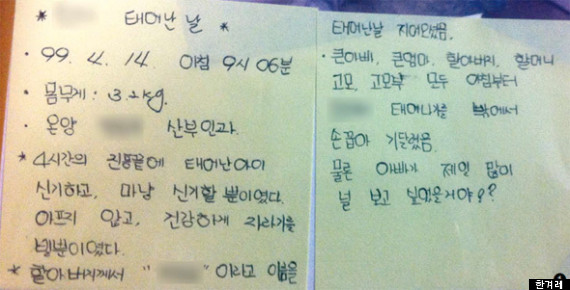 "I hope and pray that he won’t be sick and grow healthy": note in a photo album that Ms. Kim Hee-eun left when Gunoo was born. Credit: Kim Hee-eun.

Gunoo has struggled with perpetual diarrhea for his entire life. Whenever, wherever or with whomever he eats, the food passes through Gunoo’s digestive system to become loose feces. Gunoo does not like using public restrooms, especially the ones at school, because he is afraid of traces that his condition leaves behind. He always has to go to the restroom at home before school in the morning and before he goes to an after school learning center in the evening. What is a mundane process for most has become a shameful and painful event for Gunoo. The possibility of future complications is unknown. 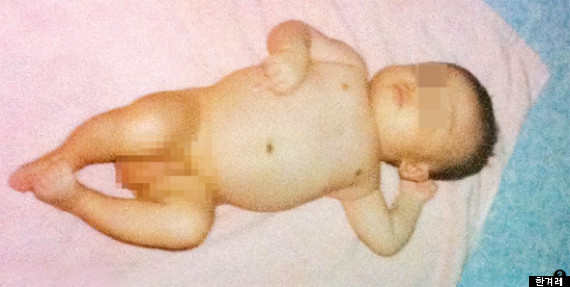 Three months after he was born. He was constantly vomiting food. He has a bloated stomach and rarely smiled. Credit: Kim Hee-eun.

The Hankyoreh met with Gunoo’s family in Onyang, Ulsang County, Korea, on Nov. 3 for the second time after an initial meeting on August 12th. The weather has gotten much colder and various cold-weather warnings have filled the nation. The season in which the newborn Gunoo struggled for his life has returned.

This mother’s one and only wish was in vain. Gunoo did not pass a meconium -- an infant’s first stool -- for 3 days, an indication of poor health for newborns. His stomach began to expand and he developed a high fever. Then he was taken to Infant ICU for about a month. The hospital decided to open up Gunoo’s abdomen, saying that his large intestine was twisted like a yarn ball. About a week later, the hospital opened 6 inches of Gunoo’s abdomen again. That November, 8-month-old Gunoo received two major surgeries and was taken to Seoul National University Hospital with a fecal collector tied to his fragile body. The hospital opened his abdomen once again to cut off his large intestine as a whole.

“I breastfed him until about 7 months but he threw up everything. Even when I fed him medicine in baby formula he would do the same… After we cut the large intestine, he stained his underwear until he turned seven. I cannot even find the right words to describe those days.”

Seoul National University Hospital followed up with Gunoo until he turned 13. This was because “an extraction of the whole large intestine has never happened” in the hospital’s history. On the last day of the 13-year-long journey between Onyang and Seoul -- in other words, in December of 2013 -- the attending doctor told Gunoo. “You must thank your mother. You know the tough times she had to go through, right?” This remark only brought more tears to Hee-eun. “I am the one who caused Gunoo to be like this.”

Hee-eun worked in Samsung Electronic’s Onyang factory from 1991 to 1998. Her father was proud when his daughter started working for Samsung Semiconductor. Fifteen workers lived in a 900-square-foot dormitory and endured a 12-hour workday with two rotations. In 1993, the schedule became a bit more lenient, with three groups among three rotations for a month at a time. It eventually improved to four groups over three rotations a few years later.

Hee-eun was able to meet and start dating her husband after her work schedule lightened. “The company pampered me with presents on holidays. Things like dishwasher and microwave oven. When I received those things, I felt like I worked for a good company although I was exhausted. My co-workers were only as old as 25 so there was no talk of children; health issues and irregular menstruation was thought to be something that everyone goes through.”

Two years ago, her perception changed. When she reunited with former co-workers who had become mothers, they shared news of the deaths and illnesses of other coworkers and their own experiences of infertility and miscarriages. She also realized the possibility of workplace injury and exposure around the same time. In addition, when she watched the Korean documentary “Another Family” this summer, a film that focuses on a woman struggling with semiconductor industrial diseases, she wailed in distress, saying, “I was there, too.” 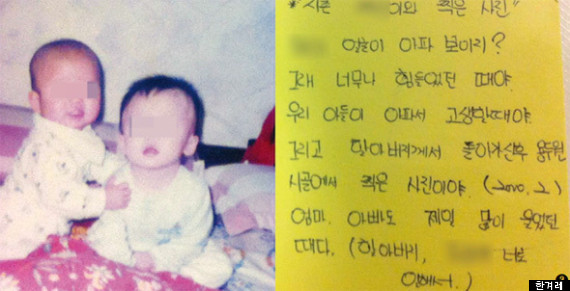 Gunoo (right) took a picture with his cousin after all of big surgeries. A note on the picture describes this period, when Gunnoo was 1 year old, as “the time when mommy and daddy cried the most.” Credit: Kim Hee-eun.

Hee-eun now remembers many warning signs that had been present in her work environment. The Onyang factory she was assigned to after 6 months of training in another factory had just begun its operation. The new factory often had equipment failures that residential Japanese engineers fixed constantly. One of the keys to manufacturing semiconductors is the molding process. Hee-eun coated semiconductor chips with epoxy molding compound (EMC) that she heated up to 356°F for preservation and protection of the chips.

All the workers were tall women like Hee-eun because they had to manually lift up and pour the chemical compound over equipment that was as tall as them, and wash the chips with another chemical compound, melamine. In the heating process, dangerous carcinogens such as benzene and formaldehyde are produced, according to Occupational Safety and Health Research Institute (OSHRI). Hee-eun, who even washed her chemically soiled protective gear herself, learned about conceiving Gunoo a week before she left Samsung Electronics.

“I finished my lunch in 40 minutes to adhere to the rotation schedule as much as possible. I had to work 12 hours a day back then, sweating constantly. No one informed me about even wearing a mask and I truly want to ask: did Samsung not advise me about exposure to toxic compounds simply because they did not know themselves?”

Currently, Hee-eun is suffering from thyroid cancer, rheumatoid arthritis, meningitis and epithelial cancer. She undergoes thyroid cancer treatment every 6 months, meningitis treatment every 3 months and rheumatoid arthritis treatment every 2 months. She has to go back to the Seoul National University Hospital every month, although the same hospital told her and Gunoo not to come back after 13 long years. “I want to sleep at least one night without any pain,” Hee-un said, expressing her most fervent wish. When she requested her past 10-year medical record to file workplace injury claims, the shocked clerk asked Hee-eun where she could possibly have worked.

Gunoo’s family is barred from most insurance coverage. The only coverage they can apply for is disaster relief and a few other cancer insurances. Even Hee-eun’s husband, who used to work at a paper-manufacturing company, hurt his fingers in their press. However, no one in the family can recall receiving workplace accident and injury insurance. Hee-eun, who spent over 15 million won (approximately $15,000 USD) on treating Gunoo, now has to worry about her own treatment fees. Her 5-year health coverage limit for thyroid cancer will be expiring next year as well.

The 42-year-old Hee-eun, who had a miscarriage at 26 weeks in 2007, does not want to see another child in unbearable pain and has decided not to have any more children.

This post originally appeared on HuffPost Korea and was translated into English. Talia Lavin contributed to this report from New York.