You may recall Samsung's amazing concept video released last December for a mobile device consisting entirely of a flexible AMOLED display. The translucent device translated languages on the spot, projected images in 3D and performed other awesome tasks.

While a super-phone like that one may still be a ways off, flexible displays seems to be just right around the corner -- and Samsung has given theirs a name: "YOUM."

According to The Verge, the company filed an application to the US Patent and Trademark Office on March 16 for YOUM's stylized logo, shown below.

In addition, Samsung's YOUM flexible display now has its own page on the Korean Samsung Mobile display website. The site features a diagram (below) demonstrating the differences that exist between Samsung's flexy display, an LCD display, and an OLED display. 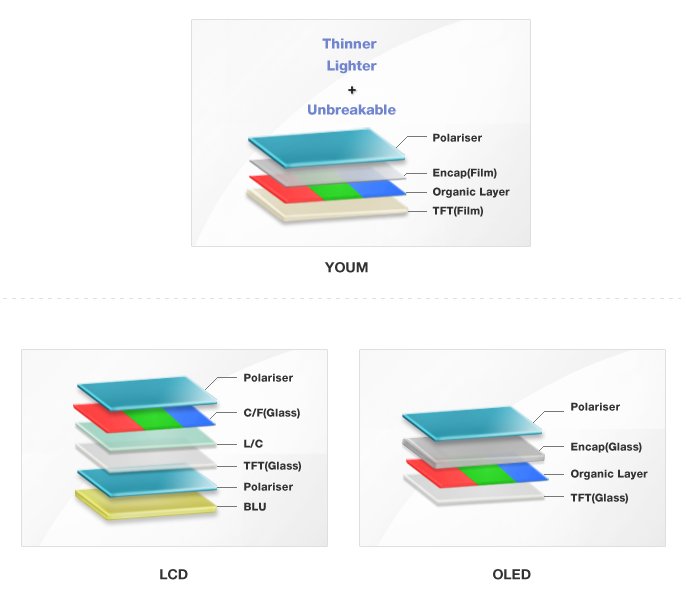 Slashgear explains that what could make Samsung's YOUM display thinner, lighter and unbreakable, as the company claims, are its "film-based encapsulation and TFT layers," which replace the usual glass layers featured in LCD and OLED displays and "make them more resilient to damage along with allowing more flexibility in device design."

And, just a few days after Nokia released a prototype of its bendable Kinetic Device last October, Samsung Investor Relations VP Robert Yi said the following in a quarterly earnings call: "The flexible display we are looking to introduce sometime in 2012, hopefully the earlier part. The application probably will start from the handset side."

So far it seems Samsung's plans are pretty much on track. Hopefully, we'll be meeting its YOUM displays in person by the end of this year. What do you think of these flexible displays? Would you buy a bendable device? Let us know in the comments!