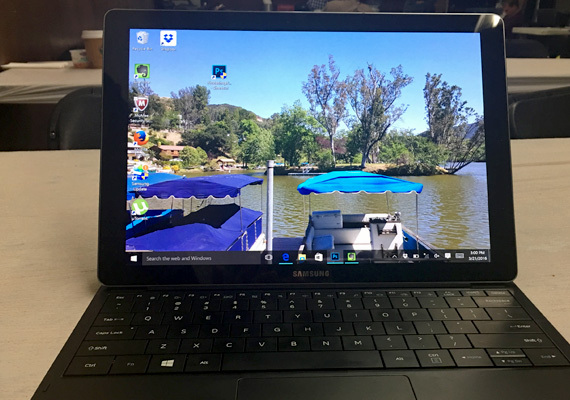 Samsung has made some good Android tablets since 2010, but none of them have ever been huge hits. They've also made some questionable Windows tablets in the past as well. However, the new Galaxy TabPro S is, perhaps, the most beautiful and useful tablet available right now. It makes the iPad Pro seem like a joke.

The $899 price tag may seem high, but it's completely worth it. The TabPro S doesn't have a desktop quality processor like the Surface Pro 4 does; it comes with a 6th generation Core m3 processor clocked at 2.2GHz and has 4GB of RAM, which is more than enough if you are a power blogger and need to use programs such as Photoshop, Microsoft Word, and Internet browsing software. As an owner of a $1500 Surface Pro 4 with an Intel i7 processor, I haven't seen a huge difference in speed doing most tasks. Then again, I have yet to use Vegas Video or even Adobe Premiere on the TabPro S yet.

It's important to note that the TabPro S isn't really aimed at the Surface Pro 4, which is more of a laptop with tablet capabilities; instead, it is aimed at the iPad Pro , especially since it is a tablet first and laptop second. The big difference between the TabPro S and the iPad Pro is that Samsung's device runs a full desktop operating system -- Windows 10. The 12.9-inch iPad Pro as well as the 9.7-inch one that was just announced run iOS, which many consider the best mobile operating system available. But that's the problem -- it's only a mobile operating system and Apple's claims that it can replace a laptop are misleading. 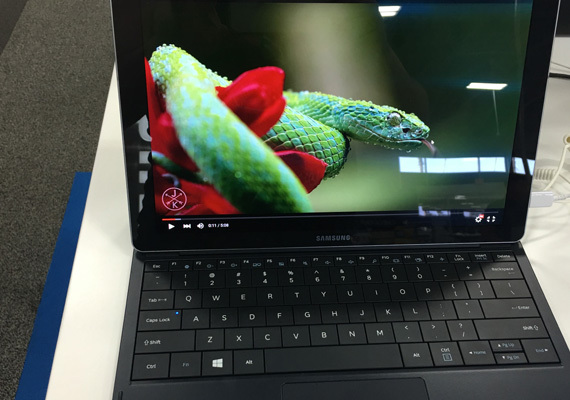 The Galaxy TabPro S has the best screen out of any tablet. [Photo by Daryl Deino]

Perhaps the best part of the TabPro S is its 12-inch Super AMOLED screen -- the first one ever for a Windows 10 tablet. To say it's beautiful is underestimating the screen, which looks at you more than you look at it. Think of the screen on the Galaxy S or Galaxy Note devices and imagine it enlarged to 12-inches. The only slight problem is the 2160 x 1440 pixel resolution, which would be great for 2013. However, in 2016, we currently have some 12-inch devices, such as the Razer Blade Stealth that have 4K screens.

The TabPro S comes with a keyboard case that wraps around the entire device when not used. The keyboard itself is good, but not spectacular. The keys are cramped together and don't have a lot of travel to them, but one can still type fast. It's easy to get used to the TabPro S keyboard after a day's use. The keyboard certainly has the same quality of the Smart Keyboard for the iPad Pro, which you have to pay $169 extra for. Unlike the Surface Pro 4, Samsung doesn't include a pen with their tablet. However, Samsung claims a pen will be available for purchase soon, but hasn't indicated a price.

One area where the Galaxy TabPro S doesn't beat the iPad Pro at is battery life, but that's to be expected. Samsung claims one can go 10.5 hours on a full charge, but I have yet to experience that. With brightness set to 50 percent (which is still bright for this tablet) while videos streamed from Netflix, I was able to get seven hours of use -- this is incredible for a device like this. You won't have to bring the TabPro S's USB-C charger with you to work every day. You can't say the same thing about the Surface Pro 4 or even the MacBook Air.