A training text, used by a martial arts school to teach members of the bushi (samurai) class, has been deciphered, revealing the rules samurai were expected to follow and what it took to truly become a master swordsman.

The text is called Bugei no jo, which means "Introduction to Martial Arts" and is dated to the 15th year of Tenpo (1844). Written for samurai students about to learn Takenouchi-ryū, a martial arts system, it would have prepared students for the challenges awaiting them.

"These techniques of the sword, born in the age of the gods, had been handed down through divine transmission. They form a tradition revered by the world, but its magnificence manifests itself only when one's knowledge is ripe," part of the text reads in translation. "When [knowledge] is mature, the mind forgets about the hand, the hand forgets about the sword," a level of skill that few obtain and which requires a calm mind. [See Images of the Last Century of Samurai Swordsmen]

The text includes quotes written by ancient Chinese military masters and is written in a formal kanbun style, a system that combines elements of Japanese and Chinese writing. The text was originally published by scholars in 1982, in its original language, in a volume of the book "Nihon budo taikei." Recently, it was partly translated into English and analyzed by Balázs Szabó, of the department of Japanese studies at Loránd Eötvös University in Budapest, Hungary. The translation and analysis are detailed in the most recent edition of the journal Acta Orientalia Academiae Scientiarum Hungaricae.

Among its many teachings, the text tells students to show great discipline and not to fear the enemy's numbers. "To see bad as good is like stepping out of the gate we see the enemy, though numerous we see them as few, therefore no fear awakes, so we triumph when the fighting is just started," it reads in translation, quoting a teaching from the Seven Military Classics of ancient China.

Last century of the Samurai

In 1844, only members of the Samurai class were allowed to receive martial arts training. Szabó explained in an email to LiveScience that this class was strictly hereditary and there was little opportunity for non-samurai to join it.

Samurai students, in most cases, would have attended multiple martial arts schools and, in addition, would have been taught "Chinese writing, Confucian classics and poetry in domain schools or private academies," Szabó explained.

The students starting their Takenouchi-ryū training in 1844 may not have realized that they lived at a time when Japan was about to undergo tremendous change. For two centuries, there had been tight restrictions on Westerners entering Japan, something that would be shattered in 1853 when the U.S. commodore Matthew Perry sailed into Tokyo Bay with a fleet and demanded that Japan enter into a treaty with the United States. In the two decades that followed, a series of events and wars erupted that would see the downfall of the Japanese Shōgun, the rise of a new modernized Japan and, ultimately, the end of the Samurai class.

One notable rule, "Do not let the school's teachings leak out!" was created to protect the school's secret martial art techniques and aid students should they find themselves in a fight. 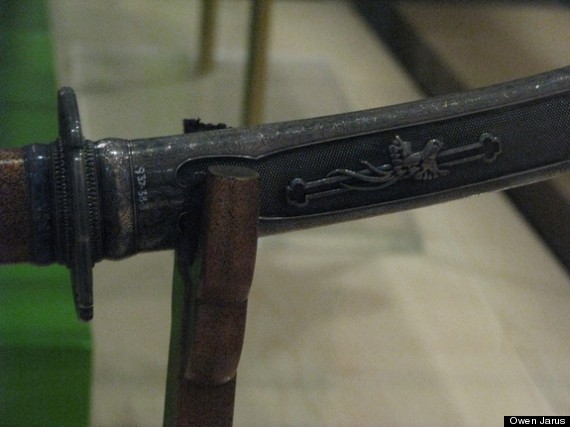 This picture shows the hilt of a tachi (slung sword), dating to 1861, which would have been used by a high-ranking young Samurai.

"For a martial arts school … to be attractive, it was necessary to have special techniques enabling the fighter to be effective even against a much stronger opponent. These sophisticated techniques were the pride of the school kept cautiously in secret, as their leaking out would have caused economic as well as prestige loss," writes Szabó in his paper. [Photos: Mixed Martial Arts in Ancient Rome]

Two other, perhaps more surprising, rules, tell students "Do not compete!" and "Do not tell bad things about other schools!"

Modern-day Westerners have a popular vision of the samurai fighting each other regularly, but by 1844, they were not allowed to duel each other at all, Szabó writes.

The Shōgun Tokugawa Tsunayoshi (1646-1709) had placed a ban on martial art dueling and had even rewritten the code the samurai had to follow, adapting it for a period of relative peace. "Learning and military skill, loyalty and filial piety, must be promoted, and the rules of decorum must be properly enforced," the Shōgun ruled (translation from the book "Studies in the Intellectual History of Tokugawa Japan," by Masao Maruyama, Princeton University Press, 1974).

The lack of details describing what these techniques looked like in practice is not surprising, Szabó said. The headmasters had their reasons for the cryptic language and rule of secrecy, he added. Not only would they have protected the school's prestige, and students' chances in a fight, but they helped "maintain a mystical atmosphere around the school," something important to a people who held the study of martial arts in high esteem.