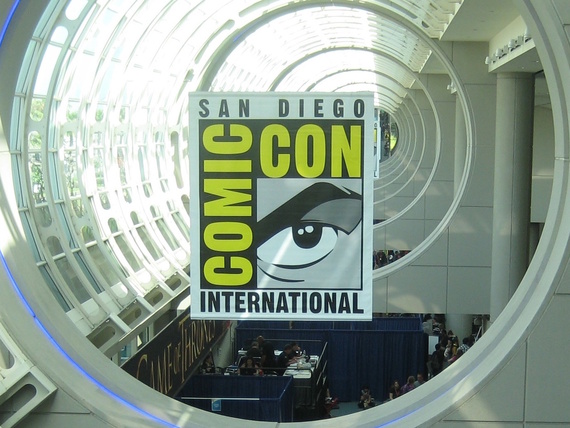 Once again it is time for the biggest pop culture event of the year, San Diego Comicon, the "Woodstock for Geeks" which is a celebration of comic books, movies, animation, and all things geek. People from around the world get together to mingle and hear from their favorite artists, actors, writers, and filmmakers in the industry. Comic-con features many industry panels, signings, surprise celebrity appearances, cosplayers, and parties. It is so hard to decide what to do, and who to see for all the countless options.

One amazing part of the convention that is often overlooked is the Comic-con International Independent Film Festival. All films in this part of the festival have been independently made with blood, sweat, and passion! The major studios swarm San Diego each year with huge, star-studded panels in Hall H, and enormous booths at the convention. Last year visitors camped out in front of Hall H overnight hoping to be admitted into the Star Wars: Force Awakens panel. Being eager to see and hear about the biggest films Hollywood has to offer with celebrity actors and directors is understandable, but what about the amazing smaller films made by independent filmmakers that can use some love and attention at Comic-con too? This is a whole underexposed part of the convention. The International Independent Film Festival runs from Thursday through Saturday at the Marriott Marquis San Diego, next to the Convention Centre in Pacific 23, North Tower. This part of the Convention is free for admission with your badge. It's an easy way to see movies made by independent filmmakers from around the world and talk to them directly! It is highly recommended that you find time to check out the fantastic films scheduled for this year. Here are some of my personal recommendations to see at the festival. Definitely make time to check out the Film Festival times on the San Diego Comic-con website for a full list of films offered for screening. You never know, you could be the first to catch a film from the next Sam Raimi, Kathryn Bigelow, or Jon Favreau.

The Crystal Crypt. Based on a story by Philip K. Dick, this film is set in a future where Earth and Mars are on the brink of war. As the last flight to leave for Earth is about to depart, Martian officers board in search of three saboteurs, and a story of heroism and deception unfolds. Starring Yuri Lowenthal (Dark Knight Returns) and Tara Platt (Naruto, Final Fantasy). Participating panelists include Shahab Zargari (director, Susannah's Lesson), Heela Naqshband (executive producer),andShahram Zargari (screenwriter, Maul Dogs). 3:05pm - 3:50pm

Bezango, WA. There are thousands of cartoonists and comic artists in the Seattle area. This film tells the tale of a few. It chronicles both the
past and present, featuring artwork, interviews, and festivals. Panelists
include Louise Amandes (co-director), Ron Austin (co-director), and Frank M.
Young (writer/colorist, Carter Family: Don't Forget This Song). 11:05- 12:50.

Floyd Norman: An Animated Life. Take an intimate journey through the life and career of the "Forrest Gump" of the animation industry: Floyd Norman. See how this Disney Legend, at 80 years old, the first African American artist at Disney, continues to influence animation and stir up his own brand of "trouble." Panelists include Disney Legend Floyd Norman (story artist, Disney's animated The Jungle Book) and filmmakers Michael Fiore (producer, Sony Screen Gems' Keep Watching) and Erik Sharkey (director, Drew: The Man Behind The Poster). I realize it's a shameless plug for a film I'm involved with, but this documentary from Michael Fiore films celebrates the life and career of a truly inspiring artist, Disney Legend, Floyd Norman, and features new interviews with Whoopi Goldberg and Don Hahn. 3:10pm - 5:00pm

Bug Zapper. The Birthday Bug. In this animated short for kids, neighborhood superhero the Bug Zapper is headed for a trap when his birthday invitation is stolen. Meanwhile, Robert's birthday party is infiltrated by the villainous Bumblebeezy, who has never attended a birthday party before. Join panelist Tom Eaton (creator, Bug Zapper comics). 11:05- 11:25

Geester. Awkward and hideous, Charles Geester wants one thing on the last day of school: a smile from the girl of his dreams. High school, timing, and of course his face complicate his pursuit for the exterior into a journey of the heart as well. Participating panelists include Alysia Anderson (writer/director), Ricky Anderson II(executive producer), and Courtney Brock (co-producer). 4:50pm - 5:20pm

Occupants. A young couple plan and produce a clean-living documentary. Set up all over their house, their cameras capture a parallel version of themselves from another dimension. Their doubles soon begin threatening the unsuspecting couple, who must find a way to close the dimensional portal. Participating panelists include director Russ Emanuel (The Legends of Nethiah), producer Howard Nash (Tiger), writer Julia Camara (Area Q.), lead actress Briana White (Summer in the Water), and Robert Picardo (Star Trek: Voyager). 10:40pm - 11:40pm

All the filmmakers in the festival have worked very hard to make these films that have been chosen as part of the Comic-Con International Independent Film Festival and they didn't have the budgets to work with that Marvel Studios and Warner Brothers provide! Most of these films were probably made for less than it cost for one day of catering on a Avengers movie. If you are able to, I heartily recommend taking time to come, view, and support independent films while you are at the con.