Ever wonder what would happen if hundreds of fireworks exploded at once?

San Diego experienced this phenomenon -- by accident -- when an annual fireworks display malfunctioned, setting off all of the fireworks five minutes prior to the start of the show. The Fourth of July celebration was expected to last 18 minutes, but went up in smoke within 15 seconds, according to the LA Times. (See videos of the show below)

One tweeter, @BenBaller, caught the incredible display in an Instagram photo that has been retweeted dozens of times:

Wtf? I think a yacht blew up #coronado @nicolettelacsoninstagr.am/p/Mr72QcJMrR/ 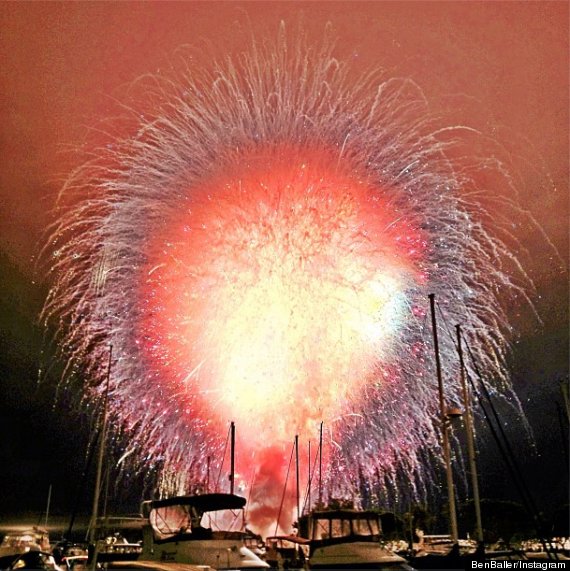 Garden State Fireworks produced the show this year, and released a statement on Big Bay Boom explaining they had a team "working throughout the night to determine what technical problem caused the entire show to be launched in about 15 seconds."

Were you at the San Diego "show?" We want to see it from your vantage point! Send us your photos or videos by clicking "Add a slide" below, or email us (technology [at] huffingtonpost.com), or tweet them to us (@HuffPostTech).

San Diego July 4th Fireworks Show Malfunctions (VIDEO): All Fireworks Explode At One Time
San Diego Fireworks Malfunction
1 / 8
The 2012 Big Bay Boom San Diego Firework Show
The Big Bay Boom Firework Show in San Diego for 2012 was a "Big Bay Bust". There was a technical problem and ALL of the fireworks went off within 30 seconds. The original Big Bay Boom was set to last about 15 minutes. Here is a 30 second video I recorded of The Big Bay Boom 2012. Thanks Chris and Karl Strauss Brewing for the party! Love the Windansea Wheat. www.karlstrauss.com Story: I was at a party for Karl Strauss Brewing, AMAZING VIEW of the Bay. So at the party we had just turned off the lights and wear listening to the radio station 105.7 the walrus which does a soundtrack to the firework show. They had just announced that the show was 5 mins. away. I had been adjusting my camera, getting all set up to record the entire show, when all of a sudden ALL THE FIREWOKRS WENT OFF. I quickly adjusted my camera and started recording. You can hear in the video if you listen closely "It looks like a finale". Everyone thought it was just an awesome intro for the Big Bay Boom Firework show, which is really amazing each year I watch. There are 4 locations, Shelter Island (shown on the right), Harbor Island (shown on the left), North Embarcadero (Shown in the center) and South Embarcadero (not really seen but behind Shelter Islands Show), and are all synced to go off at the same time with the same shows. With the 20 min. Firework Show going up in a blaze 5 mins early and only lasting 30 seconds, a lot of people became very upset over what happened. I found it funny how after the <b>...</b>