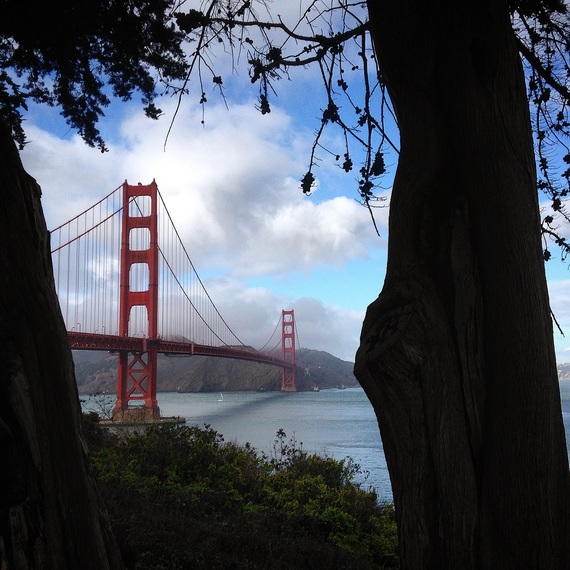 Most cities have parks inside them. But San Francisco is a city inside a park. And an 80,000-acre national park at that. Along the coast, in the bay, on the other side of the bay, and even right through the heart of the city, San Francisco is surrounded and cut by a series of national parks and monuments that have preserved both beauty and history.

Today, you can see an island prison that was once home to the gangsters Al "Scarface" Capone and "Machine Gun" Kelly, stroll the wooden deck of a century old sailing ship, or cling to the outside of a cable car as it rattles up and down roller coaster hills -- and always be part of the national park system. There are walks along sheer cliffs or on wide beaches. You can even stroll through a silent 1,000-year-old forest of redwoods and still be only a few minutes from panoramic views of San Francisco's skyscrapers. 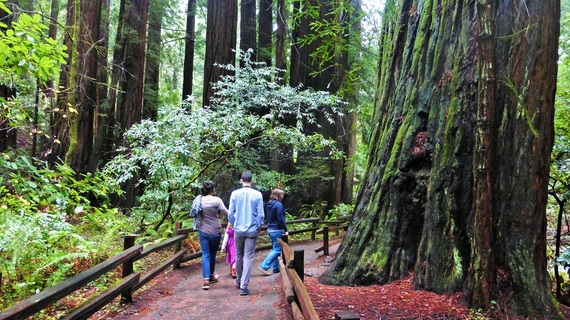 Best of all, you can walk from one national park to another across the most famous bridge in the world.

Here's some of the best national parks surrounding (and inside) San Francisco.

Everyone knows these iconic cars with their bright yellow and maroon colors, clanging bells, and strange rattling noise as they are pulled along by underground cables. But few people realize that each 15,000-pound car is a national monument -- the only moving national monuments in the national park system. At one point, there were 600 of these cable cars (never call them trolleys!) whipping up and down the hills of San Francisco. Today, only 40 survive. 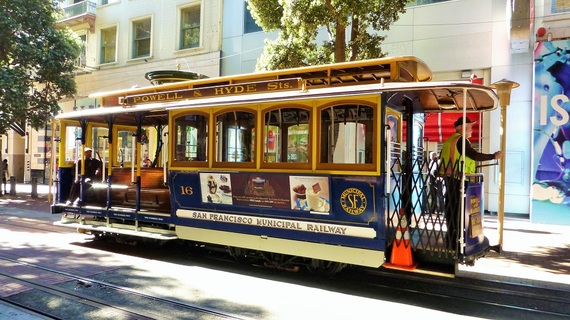 The best way to understand how the cars work is to visit the free Cable Car Museum. Here you can actually see the gigantic wheels that rotate, pulling huge steel cables in miles long circles underground. A "Gripman" on board the cable car squeezes a lever that grips the cable and drags the car forward at a steady 9.5 miles an hour. To stop the car, the gripman releases the cable and pulls a brake. It's no easy job. It takes amazing upper body strength and coordination, and any Gripman is a true hero in San Francisco. 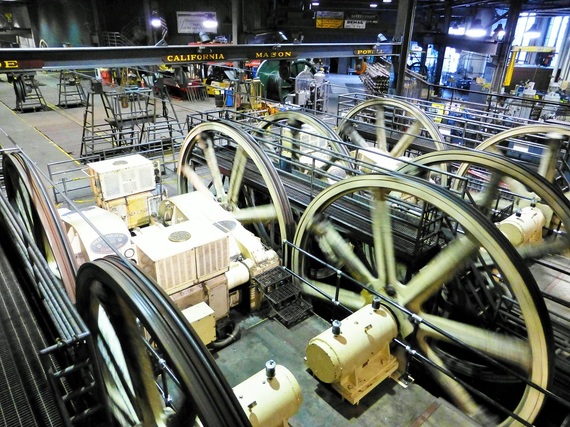 The cars can't go backwards, so when they reach the end of the line, they are turned, by hand, on a roundtable to go back the same way they came.

This Victorian transportation system started in 1873 when a Scottsman, Andrew Hallidie, witnessed a horrible accident. Horses pulling a wagon up one of San Francisco's infamous hills started slipping on the cobblestones and fell, dragging the wagon and horses down the hill into a dreadful heap. Hallidie had seen cable cars pull gold ore and was convinced they could pull humans too, but when it came time to test the first car downhill, the hired brakeman lost his nerve. Hallidie hopped on board and guided the car down safely.

Today on a ride, the hills still give the biggest thrills. The 40 cable cars are as safe as they can be, but that's not very safe. They hold 29-34 people sitting, but another 20-40 are allowed to stand on the running board holding onto a leather strap. There are no seatbelts, and the cars rattle right down the center of the street, barely missing automobiles, other cable cars, and pedestrians. 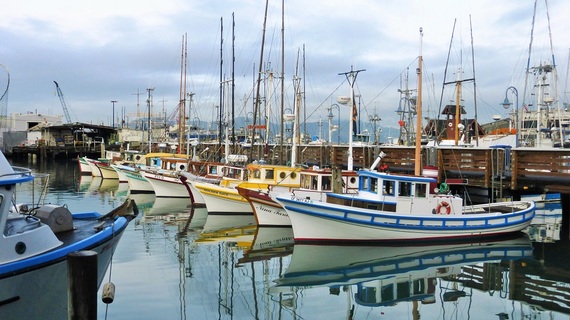 They are generally crowded. You can wait 30-40 minutes to catch one at the roundtables, but better, just walk a few blocks along the track and look for trolley boarding signs. There are no true stations. The cable car stops every few blocks and you simply jump on board, quickly, and grab a seat or a leather strap. And hold on! You can buy tickets ($7 each way) on board, but a better deal is CityPASS (which includes tickets to all of San Francisco's top attractions and offers unlimited rides on the car for seven days).

The cable cars hit most of the famous sights in the city, from Nob Hill and Chinatown to Fisherman's Wharf. Of the three lines, the Powell Hyde is the most thrilling, and the California Street line the least crowded.

The solid rock island sitting 1.25 miles off the shore of San Francisco has been a fort and a lighthouse, but is best remembered as the most infamous prison in U.S. history -- Alcatraz. From 1934 to 1963, it was the nation's toughest maximum-security prison -- the place they sent the worst criminals or those who had caused trouble in other prisons. 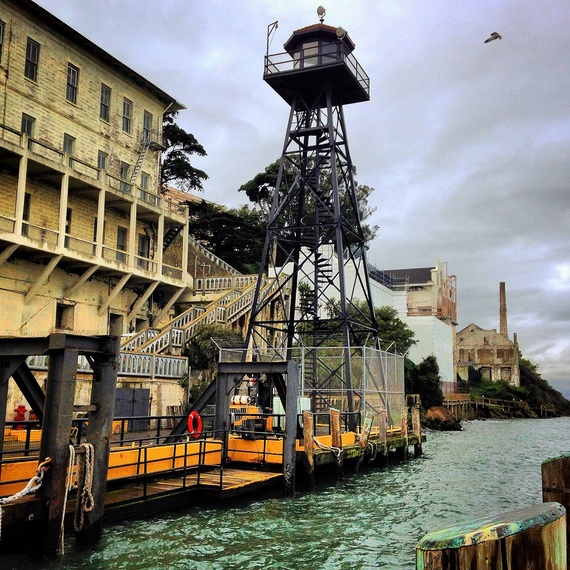 Generally, about 260 inmates lived here in cold, windowless, tiny 5x9 foot cells. There were three guards for every prisoner, six guard towers with machine guns and miles of barbed wire, while the surrounding water was freezing with strong currents.

Still, the human spirit being what it is, 34 inmates tried to escape in 14 different attempts. Many were machine-gunned or recaptured, while others drowned in the bay. But five inmates were never seen again, and though presumed dead by drowning, who knows?

Today the prison is run as a museum by the National Park Service. It still exudes a feeling of loneliness and cold damp misery, especially in D Block, the dreaded solitary confinement cells where inmates spent 23 hours alone each day. On New Year's Eve, the prisoners could hear big band music drifting across the water from parties in San Francisco. 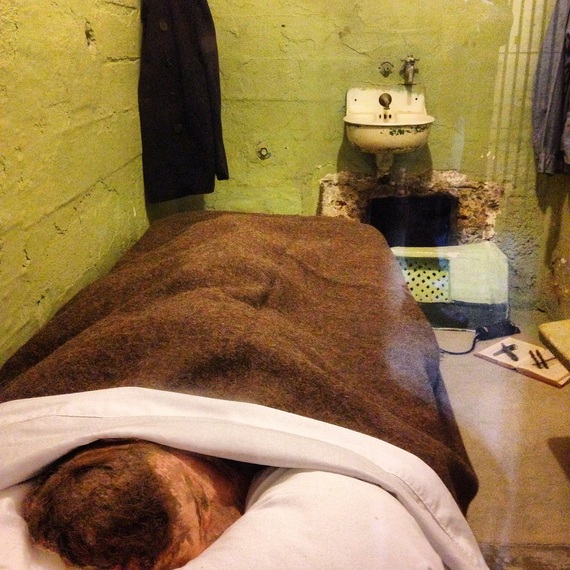 An extremely well done audio tour narrated by former guards and prisoners walks you through the cell blocks, with special attention on the escape attempts, including the last possible successful escape in 1962 in which three inmates made dummy heads to fool the guards to make it look like they were sleeping in their bunks. The actual cells they escaped from are made to look exactly as they would have to the guards, even the dummy heads have been preserved in exhibits and photos. The tour is fascinating couple of hours, but when it's over, no one is sorry to leave Alcatraz.

At close to 80,000 acres, Golden Gate National Recreation Area begins on the beaches and rocky shoreline where the Pacific Ocean pounds into the San Francisco coast, and extends inland to encompass forts, mountains, rolling grasslands and ancient fog-shrouded forests.

The newest addition is ironically San Francisco's oldest historic site -- the Presidio. It was here in 1776, at the same time that Thomas Jefferson was writing the Declaration of Independence back east, that the Spanish established their first fort. Parts of the old adobe walls are still visible in the newly opened information center and museum. For 218 years, the Presidio remained an important military base, changing over the years from being defended by cannons to becoming a control center for Nike missiles. Then in 1994, the U.S. Army closed the base and gave it to the National Park Service. Today, there are 20 miles of hiking and biking trails, incredibly stunning views of the Golden Gate Bridge, and some of the city's most spectacular beaches.

The old army buildings are being repurposed as everything from a new upscale restaurant "The Officers Club," to an entertaining museum detailing the life of Walt Disney. Strange mixture? Why not? The Presidio was the fictional earth headquarters for Starfleet Command in Star Trek, and today the real George Lucas has his office here.

From the Presidio, you can walk, bike or drive over the 8,000-foot long Golden Gate Bridge to the Marin Headlands, the often foggy rolling hills that slide down in sheer cliffs to the crashing Pacific Ocean below. At Rodeo Beach you can see 300 species of birds or hike along the booming surf to the Point Bonita Lighthouse. 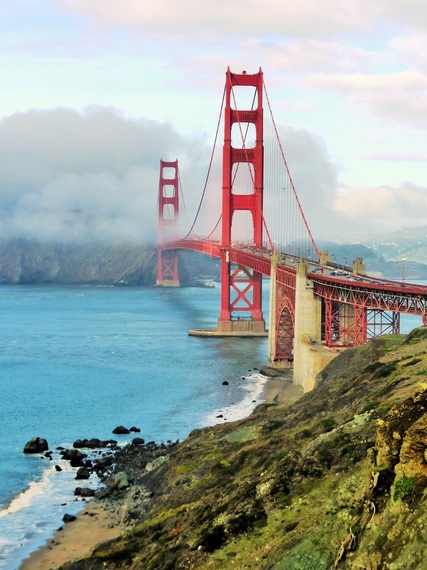 Further north, drive to Muir Beach and stop for a pint of ale in the completely authentic English pub, the Pelican Inn. From its half-timbered dining rooms to its snug little wood paneled bar, this is the place to warm up by a fire after a brisk beach walk in the fog. Further north, Stinson Beach is another flower-decked village worth a visit. But mind how many pints of ale you enjoy at the Pelican before the drive. The road here is filled with hairpin curves and sharp cliffs. 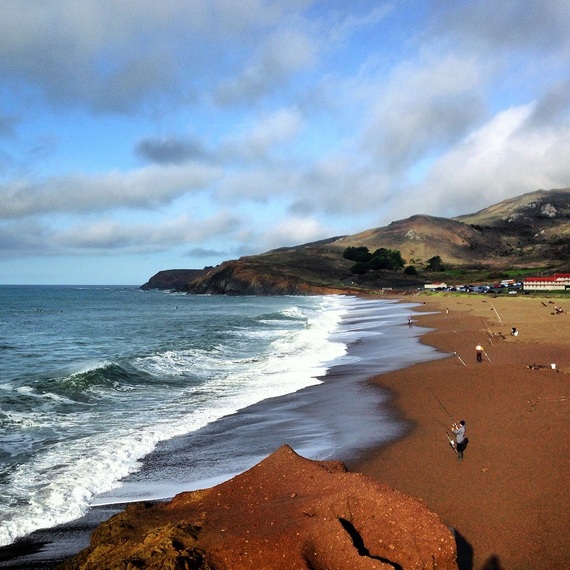 Another torturous and twisting road leads inland to a high, flat, mountain valley where a pretty creek is lined with thousands of the tallest living species on earth -- the coastal redwood. Redwood trees covered much of the Northern Hemisphere 150 million years ago. Today, only a very few groves survive. The ones here, Muir Woods, were preserved as a National Monument by President Theodore Roosevelt in 1908. 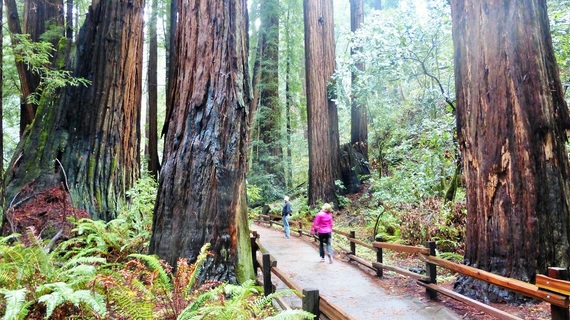 Some of the trees in this ancient forest are 1,000 years old. Redwood trees can grow to be 300 feet tall and require a foggy climate to get enough moisture. At their base, it is always cool and dark with just a few shafts of light drifting through the upper branches. The forest does not support much wildlife, so it is always silent here. National Park signs ask people to be quiet as you walk through the tallest trees at Cathedral Grove. It's hard to believe, as you listen to the creek and walk past these venerable and silent evergreens, that bustling San Francisco is just 12 miles away.

If you go, check out more San Francisco travel sites.