The fight over place of Islam in popular culture came roaring back to the forefront of San Francisco public transit recently as a series of anti-Islamic billboards from the American Freedom Defense Initiative began running on Muni buses across the city this week.

The ads, which closely mimic the style of a separate campaign run on the transit system earlier this year by MyJihad, show pictures of Islamic figures next to inflammatory quotes that read:

"The first thing we are calling you to is to Islam." - Osama bin Ladin

"The mosques are our barracks, the domes our helmets, the minarets our bayonets and the faithful our soldiers" - Recep Tayyip, Prime Minister of Turkey

These ads are only the latest salvo in a back-and-forth between AFDI and MyJihad that's played out on bus ads around the country over the past year. The conflict began when ADFI ran a series of ads on San Francisco buses that read "In any war between the civilized man and the savage, support the civilized man."

These ads, which the ADFI's Pam Geller told ABC San Francisco were in response to another campaign that advocated the cessation of U.S. military aid to Israel, sparked an outcry across the city and were only accepted by the San Francisco Municipal Transportation Agency because of a federal ruling.

Paul Rose, spokesman for Muni, says that the agency doesn't support the content of the new ads, yet isn't about to let itself get sued by the American Freedom Defense Initiative. "We don't believe it's right to use public money to litigate over the FDI's First Amendment rights," Rose said. "As a city agency the MTA's job is to provide safe and reliable transportation to the public."

As a result of the widespread criticism, SFMTA donated all revenue generated from the ads to the city's Human Rights Commission and posted written apologies on the other side of buses that were running the ads.

"[San Francisco] has a long history of tolerance for all, and while we honor a person’s right to self-expression, there are times when we must say 'enough,'" said SFMTA Board of Directors chairman Tom Nolan of the "savage" ads in a statement. "The recent ad has no value in facilitating constructive dialogue or advancing the cause of peace and justice. While this ad is protected under the First Amendment, our ad policy and our contractual obligations, we condemn the use of any language that belittles, demeans or disparages others. Going forward, we will review our policies with regards to ads on the Muni system."

The MyJihad ads, which ran on San Francisco buses this January, depicted Muslim Americans talking about their own personal jihads--ranging from "not judging people by their cover" to "stay fit despite my busy schedule"--in an effort to redefine the American conception of the word "jihad" to mean something more akin to an individual's internal personal struggle.

"We're troubled by how the word 'jihad' has been hijacked by people who...have made careers out of pushing anti-Muslim sentiment," Zhara Biloo, executive director of the Council on Islamic American Relations' Bay Area chapter told the Huffington Post earlier this year. "For too long people outside the Muslim community have been telling us what our religion really teaches."

This most recent round of ads intentionally employs a similar font and layout as the MyJihad series and have been condemned by city leaders. San Francisco Board of Supervisors President David Chiu held a rally on Monday against the campaign and plans on introducing a non-binding resolution officially putting city lawmakers on record as being against the ads.

San Francisco leaders have denounced a series of what they call anti-Islamic advertisements that began appearing on 10 city buses on Monday, calling them racist and offensive....Mayor Ed Lee, District Attorney George Gascon and other elected officials joined Arab and Muslim community leaders to publicly condemn the ads on Monday.

"These offensive ads serve no purpose than to denigrate our city's Arab and Muslim communities," Gascon said.

Check out this slideshow of the MyJihad ads: 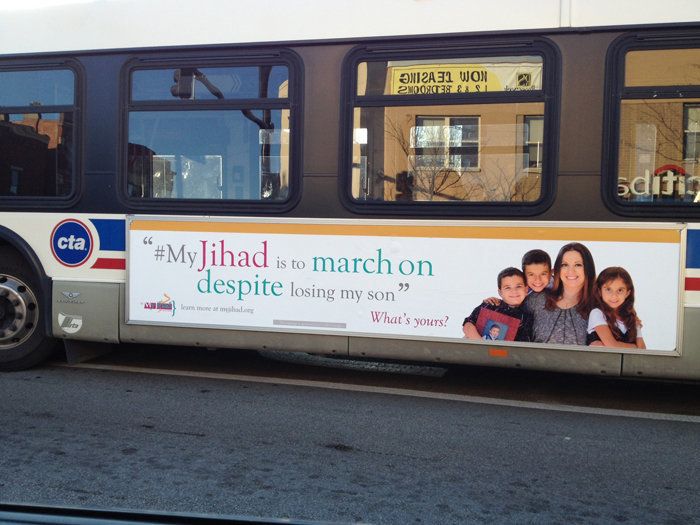