There've been long-standing murmurs about this fair city that despite all of its charm and potential, in the realm of the arts it will never be a "player." A common complaint? "It's too provincial." There is even an inquiry on Yahoo answers that asks "Why is San Francisco So Provincial?"

Sure, it has great food, gorgeous vistas, funky neighborhoods. It's a top tourist destination. But a player in the arts? "It's so comfortable, people get complacent," observed one artist, on the eve of her move to L.A. "It doesn't have the edge necessary to compete," remarked another filmmaker, who re-located to New York. Quoting another artist with very clear views on the subject, "The most important thing for a dynamic art scene is money and patronage. We have neither. Do we have dynamic public art like Chicago - NO. Do we have a world class museum with world class shows - NO. The one world class thing we do have in the bay area is food."

Okay, so we have great food. And perhaps we're a bit smug and provincial. But a player in the arts? Absolutely. One of the best-kept secrets about this city is how, in so many ways, it is San Franciscans who have made it all possible.

That movie you saw this weekend? In 1872, San Franciscan Leland Stanford, an avid horse lover, commissioned the ingenious inventor Eadweard Muybridge to use Muybridge's newly invented photographic technology to establish whether a galloping horse flew when it ran - i.e., whether it ever had all four feet off the ground simultaneously. Muybridge rigged a system whereby a horse tripped a line of cameras set along a race track, which took instantaneous images of that horse running by. That sequence of images (which established that yes, the horse did leave the ground), was the precursor to motion pictures - and the invention of film. (Stanford, ever the horse lover, also financed the first cable car street line, which enabled the hauling of heavy cargo up steep hills, so the poor horses wouldn't be killed trying to do the same thing.)

The legacy of San Franciscans lending their wealth toward brilliant invention continued a hundred years later. That computer that you're reading this on? In 1961 Arthur Rock paired up with Thomas Davis, Jr. to pioneer the concept of investing money not in a product, but in a dream and idea -- the concept of venture capital. San Francisco venture capital firm Davis & Rock were pivotal in the development of the semiconductor and the microprocessor - enabling the invention of the modern-day computer. The companies they helped finance form the backbone of what is now Silicon Valley. The birth of the concept of venture capitalism is aptly captured in San Francisco filmmakers Dayna Goldfine and Dan Geller's wonderful recent film, "Something Ventured: Risk, Reward, and the Original Venture Capitalists."

That thin-screen television in your living room? In 1927, San Franciscan Philo T. Farnsworth invented the television. Only 21, in his lab on Green Street at the bottom of Telegraph Hill, Farnsworth's invention first transmitted the blurry image of a line, sending signals from the lab at 202 Green Street to the Merchants' Exchange Building at Battery and Washington - eight blocks away. He further perfected the technology and in 1929, transmitted the first live human images using his invention - an image of his wife, Elma, talking.

San Francisco was host not only to these creative inventors in technology, but to inventors in the arts, as well. That lovely framed photograph on your wall? In 1945, at the renowned San Francisco Art Institute, photographers Ansel Adams and Minor White dreamed up the concept that photography could be more than just documentation or journalism -- it could be fine art in and of itself. They invited Dorothea Lange, Imogen Cunningham, and Edward Weston to teach with them, beginning the first photography department in an art school, and in doing so, invented the concept of the photograph as fine art. Around the same time, filmmakers at the school also pioneered experimental cinema and the American Avant-Garde film movement.

One of the artists I cited earlier complained that we don't have dynamic public art. But wait. The city itself was a pioneer in funding public art, enacting a government charter strictly for championing and funding the arts - one of the earliest Arts Commission. As stated on the San Francisco Art Commission's website, "The San Francisco Arts Commission was established in the Charter of the City and County of San Francisco in 1932 to ensure that the arts would be incorporated into the civic infrastructure for the City's residents." By establishing this charter, San Francisco was instrumental in the very concept of creating a fund specifically for public art in this country. 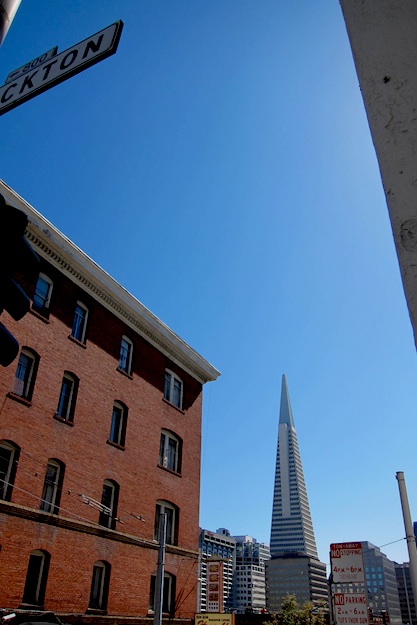 San Francisco, a rock star in the creative world. Photo taken on The Real San Francisco Tour by A. Snaps.

The other day, I heard from a friend about a great little insider's walking tour that gives you a glimpse of this city's best-kept secrets and inventions. The Real San Francisco Tour takes you through a sampling of the city's public art, offers a peek at that birthplace of fine art photography, and treats you to a stroll in a park designed by a landscape architect who, incidentally, first popularized the concept of the patio in the United States. [And you also get to take in those vistas and sample the great food, like the micro-roasted Blue Bottle Coffee and Smitten's artisan ice cream.]

What's next? Well, perhaps San Francisco is provincial. Perhaps we won't be the next big player in the art world. That's okay. We're already a rock star. In our fair little city, we'll just keep inventing what makes it all possible.