How an animal listens is a direct function of how well it is able to hear. Baleen whales rely on a very low-pitched, or infrasonic type of sound which can travel great distances, allowing some whales to communicate across vast regions of ocean.

Toothed whales use echolocation as a highly accurate tool for scoping out their environment. This high-pitched ultrasonic sound works very much like sonar and is especially effective in targeting prey. The following clip from Frozen Planet demonstrates how a pod of orca whales uses a winning combination of teamwork and communication skills.

Humans are not always as clearly focused on their goals. Romance, which initially seems like a grand idea, can often evolve from a happy form of bonding to a frustrating form of entanglement, as depicted in Masahiro Sugano's touching silent short entitled Yarning For Love.

Two years ago I came across a news article about the Coffin Academy, a business catering to South Koreans that had become quite popular. For $25, customers were taken through an exercise in which they wrote farewell letters to their loved ones as well as epitaphs for their tombstones. Not only did they get to try out a coffin to make sure it was a good fit, the coffin was nailed shut while they spent 10 minutes inside it, meditating on their past, present, and future.

Filmmaker Erin Li's five-minute short, L.A. Coffin School, provides a curious backstory for the experience. After being kicked out of her son's home, a famous painter enrolls in a coffin school that helps people appreciate the lives they have led while finding the strength (if so desired) to start all over again.

What impressed me about Li's film was not just how much she was able to communicate in such a short period of time, but how beautifully many shots were framed. In the following video clip Li and one of her actors, Angela Ai, discuss some of the challenges of capturing a tiny part of the Asian American experience and making it visible to a wider audience.

While the protagonist in L.A. Coffin School is contemplating the meaning of life and death, Green Plastic Sandals focuses on a young woman who can't get her father's ghost to leave her alone. Directors Stephanie Wu and Andres Rosende pack plenty of art and gore into 11 unnerving minutes of premarital anxiety. 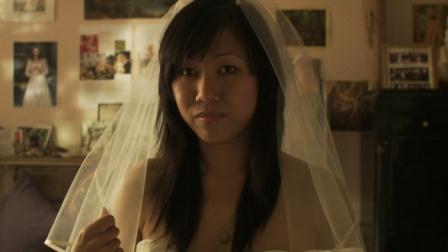 Rita (Angela Lin) is a young woman whose parents may be dead, but her choice to marry outside of her race is accompanied by an unusual kind of haunting. It's one thing to be a nervous Chinese-American bride. It's quite another to keep suffering vivid hallucinations of your deepest and darkest fears as you prepare to wed. 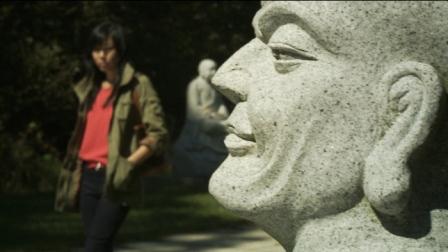 Ben (Marcel Simoneau) is a handsome, loving hunk, the kind of guy any woman would want to marry. But Rita's dead father (Clem Cheung) is as old school as spirits get. If his ghost has to splatter blood all over his daughter's inner thoughts to prevent her from marrying a white man, he's ready for a good challenge. 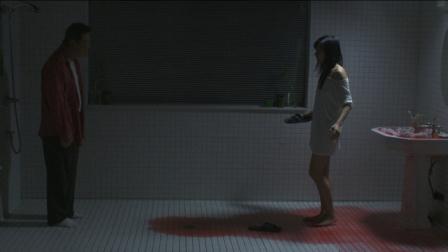 Sir Walter Scott is famously quoted for writing "Oh what a tangled web we weave, when first we practice to deceive!" DOL: First Birthday is a 12-minute short by Andrew Ahn in which Nick Kim (Joshua Kwak), a Korean-American gay man, leaves his lover Brian (Martin Lee) at home with their dog Chloe while he attends the family celebration surrounding his nephew's first birthday. 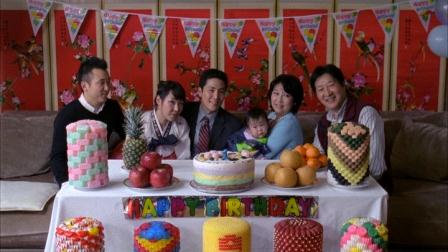 Although Brian is well known to Nick's family (and has even bought a present for the nephew), Nick's internalized homophobia gets in the way of them both enjoying the festivities. When Nick comes home, sad and depressed, Brian comforts him in the shower.

"I made this film to come out to my parents. I knew I wouldn't be able to tell them, to say the words 'I'm gay,' so I hoped that showing my parents a film about a gay Korean-American man would help them understand me. I wanted to use the medium of filmmaking to tell them a story, not just say the words 'I'm gay.' And hopefully the story would better articulate who I am and what I am dealing with: that I struggle with my gay and Korean identities, that I wish I could have a family the way my father had a family, and that despite all this, I am a proud gay man. So I cast my family in the film, but never told them that it was about a gay Korean-American man. The filmmaking process both distracted from and prepared me for the inevitable -- that I would eventually have to show my parents the finished film."

Ahn's short reinforces the silent harm gay people do to themselves and their loved ones by not being fully out of the closet. Here's the trailer:

The Ottawa Citizen recently ran a superb feature on Scott Heggart (entitled "A Gay Jock Takes Off The Mask") in which they described the aspiring athlete's year-long process of posting video diaries to his YouTube account as he struggled to come out to his parents and teammates at school. It's a beautifully written piece, made all the more touching by the young man's intelligence, honesty, and comfort in front of the camera.

While Andrew Ahn depicts a character who is easily intimidated by his culture, Heggart is a rabid hockey fan who is trying to cope with the homophobia that runs through the sports world. Scott's solo appearances are impressive enough, but the interviews he conducts with his parents offer sterling lessons in how to go about gaining the support of one's family in the coming out process. This interview with his father is a classic: