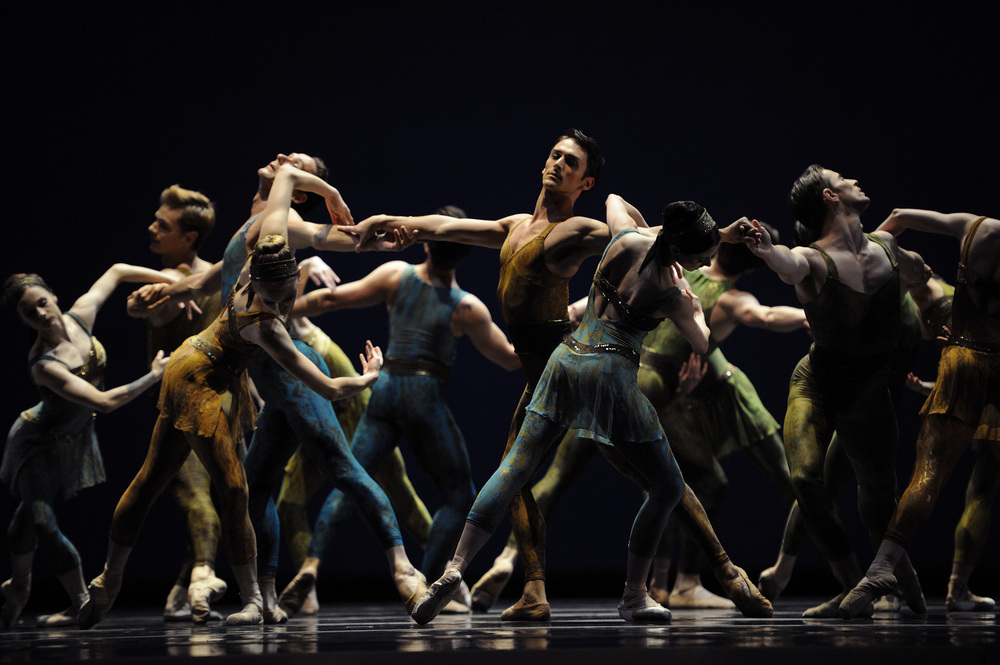 San Francisco Ballet's mixed bills of late seem to stand or fall on the choice of music; the dancing is damn near flawless, and the choreographers are world-class craftsmen. In Christopher Wheeldon's mesmerizing Within the Golden Hour, all the couples, lead and corps, beautifully costumed and lit, wrapped themselves around each other with an intensity and a sensuousness that was wondrous to behold. Wheeldon's choreographic inventiveness, however, is curiously at odds with the dullness of the score. He does throw in the heavenly Andante from Vivaldi's "Violin Concerto in B-Flat Major" near the end, which provides a respite from the humdrum of Italian composer Ezio Bosso's repetitive loops. It is a wonder the musicians in the pit did not fall asleep to Bosso, but it should be noted that the orchestra played brilliantly all weekend under the direction of Martin West and Ming Luke. 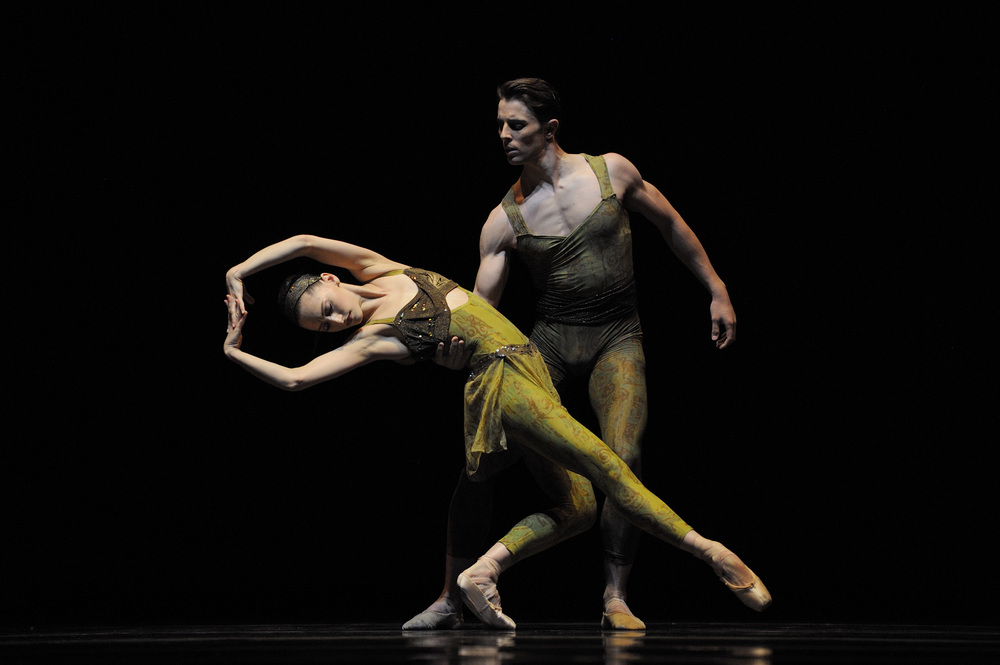 One choreographic motif that made Ballet To The People grumpy, however, was the repeated raising of the arms in what her date called "the Keith Haring pose," which struck her as what the cops order you to do after they insist that you put down the gun. No doubt Wheeldon was going for an exciting new port de bras to accompany those sensual pivots, jumps and lifts, but this wasn't it: it just looked lazy and ruined some otherwise lovely silhouettes. 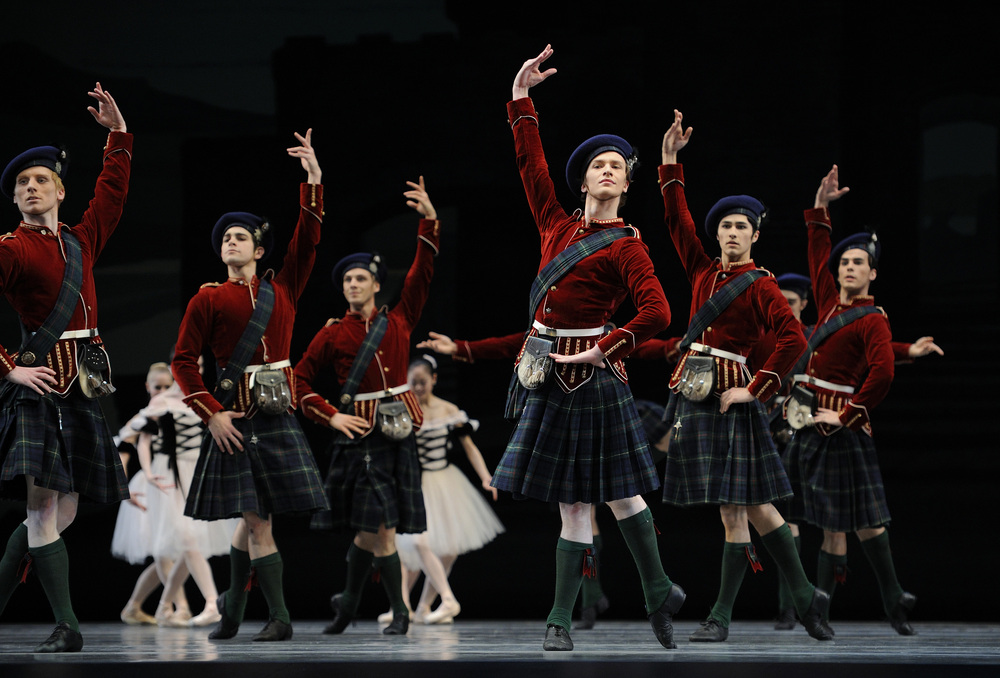 Saturday evening opened with Mendelssohn's lush Scottish Symphony to which Balanchine created an entertaining pastiche of Romantic ballet and Scottish reeling with a hint of Ziegfeld Follies. Maria Kochetkova was a radiant sylph, and Joan Boada the ardent admirer of her sparkling footwork. He steadfastly ignored rebuffs by Kochetkova's stern-faced clansmen, who apparently disapproved of the color of his tartan. The real stars of Scotch Symphony however are the corps men, dashing in their kilts, and the ladies (led by the delightful, fleet-footed Courtney Elizabeth) who tore up the stage with their lightning-speed jetés battus, cabrioles, brisés, and skidding ballonnés. 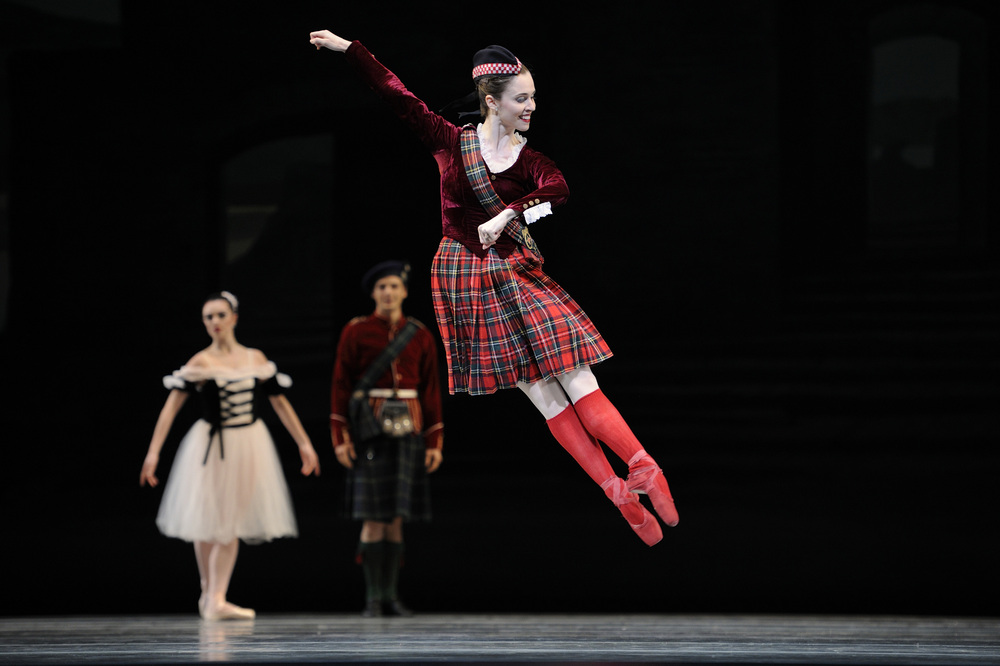 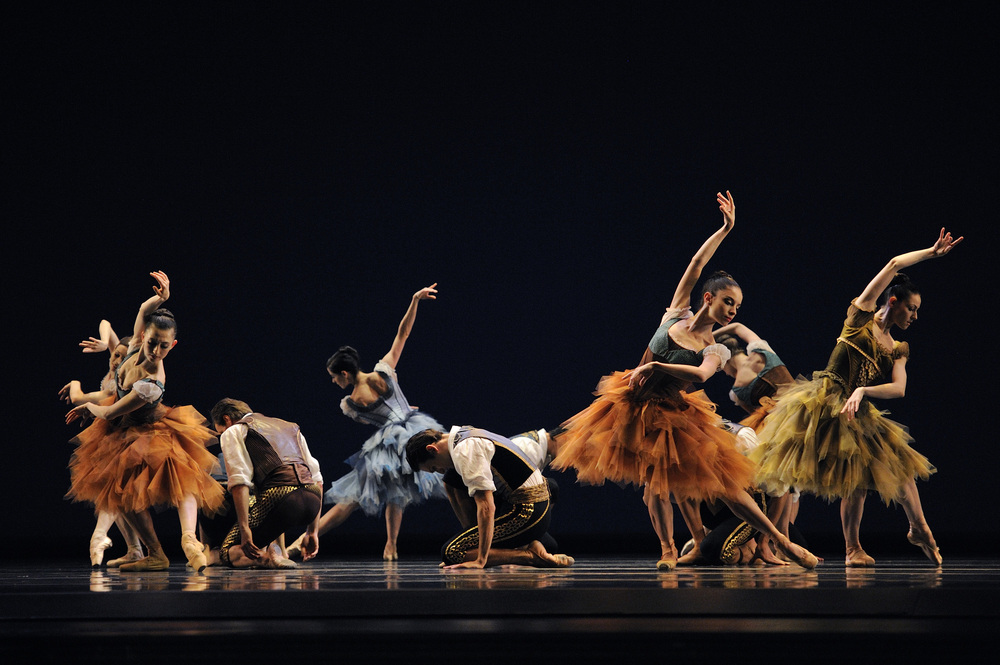 Saturday evening closed with Alexei Ratmansky's new collection of dances From Foreign Lands, set to a lilting suite by Moszkowski. The music is hardly revolutionary but Ratmansky adds spice and wit, deftly interlacing folk dance with classical ballet as if to comment on how ballet has freely stolen movements from peasant dances, court dances, etiquette rituals and pursuits like fencing to create its own richly expressive vocabulary. One would have to watch this ballet several times to catch all the witticisms, but one deterrent is the ill-advised costuming by Colleen Atwood (a frequent Tim Burton collaborator). The "shredded" tutus in Easter egg colors were appropriately bouncy in the final piquant Hungarian dance but otherwise obscured the body lines, especially the many interesting twists and spirals, making the normally elegant women of San Francisco Ballet look like newly hatched ducklings. 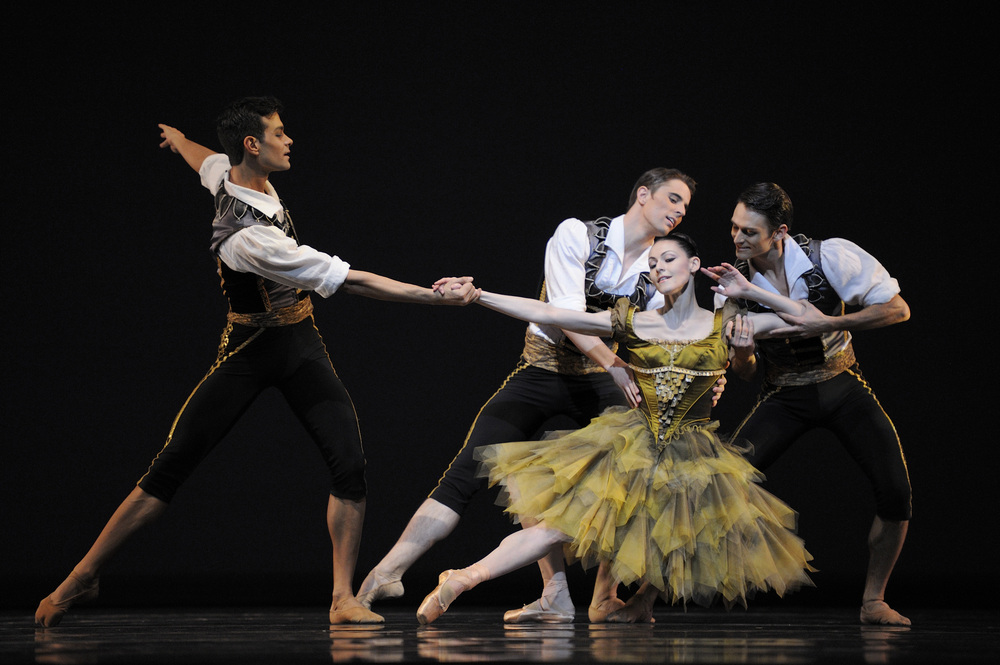 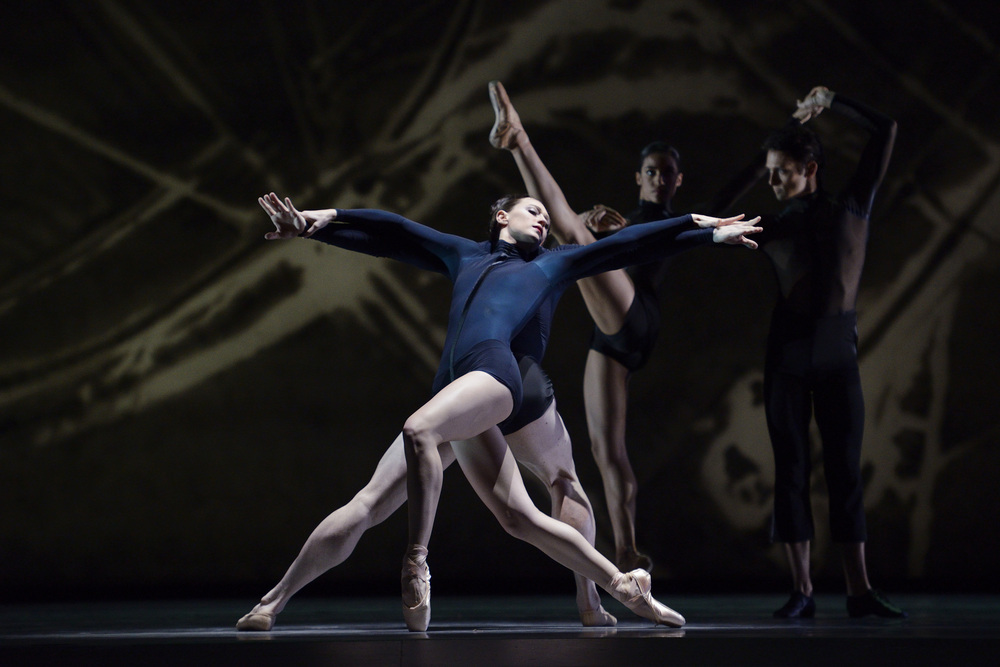 Sunday's matinee opened with a loud bang. Several loud bangs. And lots of other thrilling sounds courtesy of Bay Area composer John Adams. His stimulating Guide to Strange Places, with its driving rhythms and insanely inventive instrumentation, is a gift to any choreographer -- as evocative in its own way as Tchaikovsky's Nutcracker or Swan Lake. (Ballet To The People couldn't actually see the musicians in the pit but imagined them high-fiving each other and having a high old time playing this stuff.) Ashley Page, formerly of the Royal Ballet and now Artistic Director of Scottish Ballet, responded movingly to the music, with nods to Jerome Robbins' West Side Story and Glass Pieces, and it's hard to imagine his choreography danced any more heroically than by Frances Chung, Vanessa Zahorian, Maria Kochetkova and Sarah Van Patten, fluently partnered by Pascal Molat, Jaime Garcia Castilla, Gennadi Nedvigin and Carlos Quenedit. The striking scenic and costume design by Jon Morrell and lighting design by David Finn reinforce an idea of the industrial bleakness of modern existence, from which human connectedness remains our only salvation. 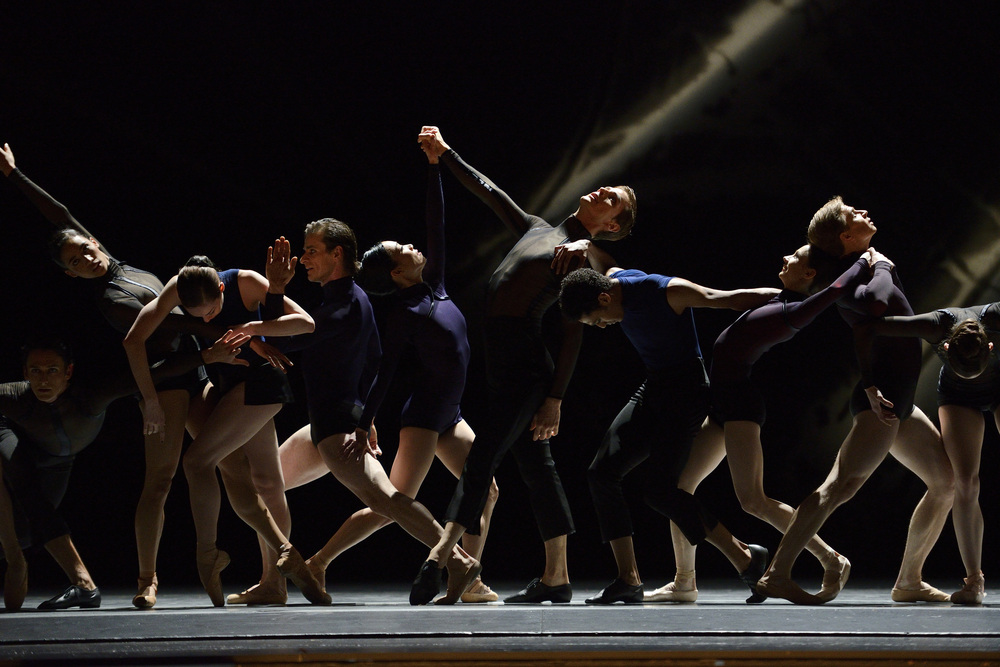 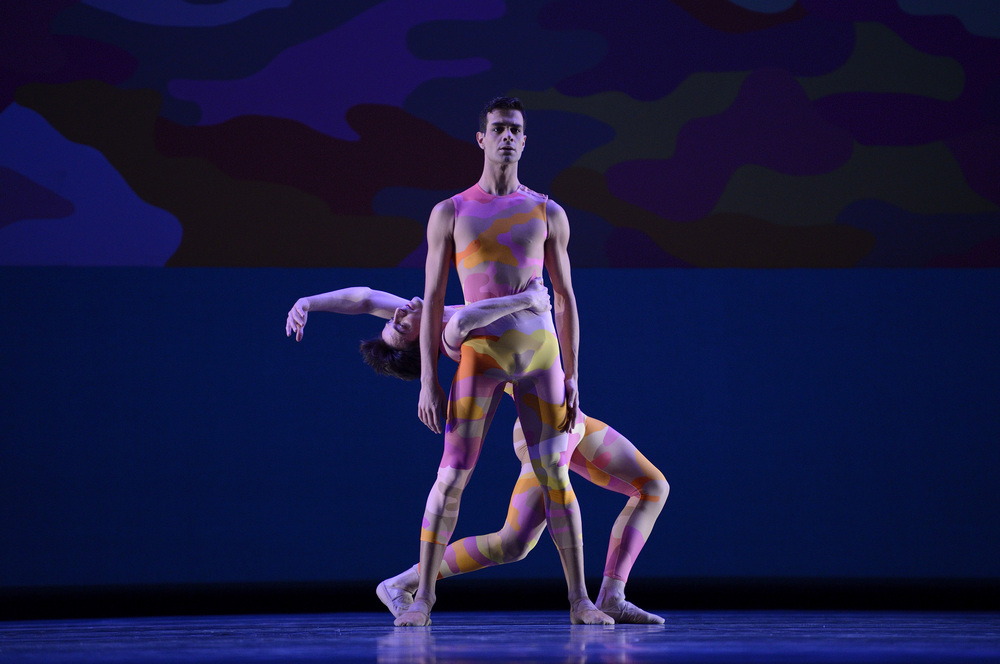 Mark Morris' all-male Beaux premiered last season and it is still mildly disappointing. One applauds the choreographer's desire to create a new identity for male dancers free from the clichés of bravura ballet dancing. Lar Lubovitch succeeded beautifully with his iconic "Concerto Six Twenty-Two" some thirty years ago. But he had plenty of help from Mozart, whereas Morris must struggle to wrest similar emotions from the pallid harpsichord score by Martinu. The men's skintight unitards in camouflage-patterned shades of peach, pink and daffodil against a matching backdrop by the very chic Isaac Mizrahi subvert the point of the piece by trumpeting it loudly. The choreography is genial and often witty, and the dancers are technically crackerjack, but there is a sense of overwhelming languor. Beaux might have driven home its point more strongly had the men been outfitted in authentic military garb, carrying assault weapons and surrounded by barbed wire. 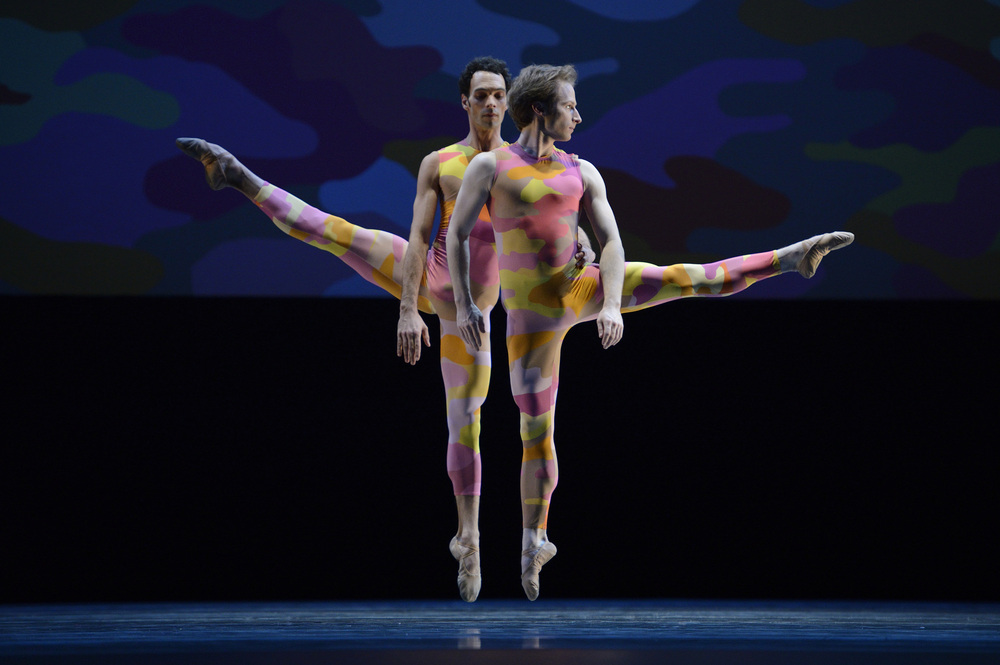 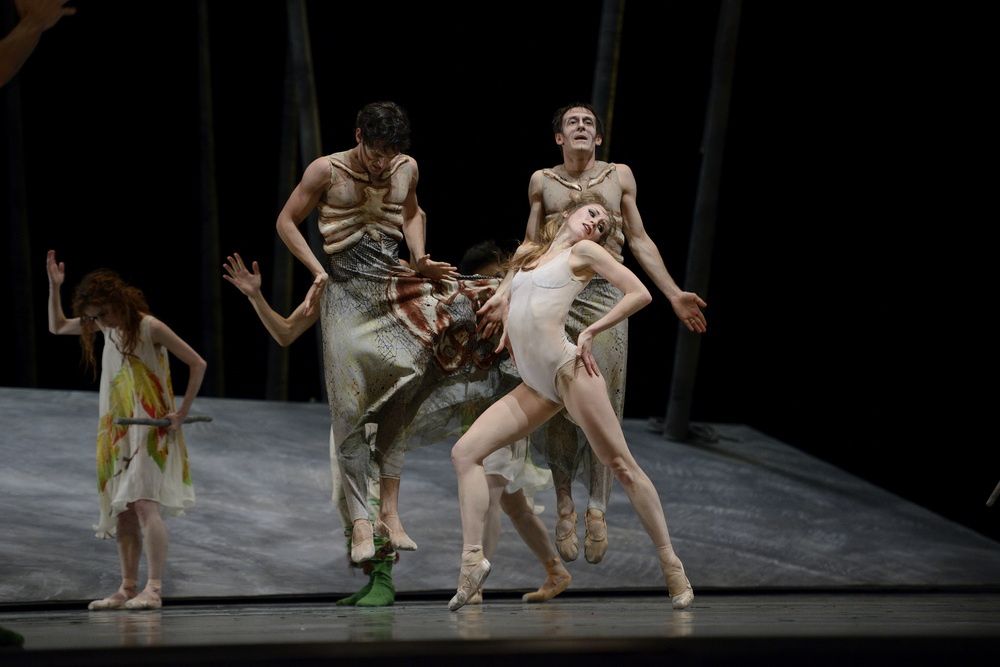 Jennifer Stahl as the Chosen One, Garen Scribner and James Sofranko as the Wise Elders in Possokhov's 'The Rite Of Spring'. (Photo: Erik Tomasson, courtesy San Francisco Ballet.)

Nearly lulled into a nap by the harpsichord, Ballet To The People snapped to attention at the first strains of the bassoon in Stravinsky's Rite of Spring. At least a dozen choreographers have re-imagined this work since Nijinsky's original provoked riots at the Théâtre des Champs-Élysées in Paris 100 years ago. Ballet To The People has suffered through several of the more bizarre incarnations but was still unprepared for what at first glance appeared to be a photo shoot for Victoria's Secret gone terribly, terribly wrong. Young women pulling thin, gauzy shifts over their heads, being manhandled by bare-chested young bucks brandishing sticks, the wise elders portrayed by two strapping beach boys in a stretchy sarong... Would this turn out to be no more than San Francisco Ballet's Rite of Spring Break?

Resident choreographer and former Bolshoi dancer Yuri Possokhov is not the first to adopt an overtly sexual theme shot through with gratuitous violence. The Rites of Pina Bausch and Maurice Béjart, each provocative in its own way, come to mind. Purists will grumble that Possokhov has abandoned the original storyline of an ancient ritual sacrifice needed to ensure the arrival of Spring, nonetheless his work here is sensational, elegant and engrossing, a compelling alternative interpretation of the legendary score. 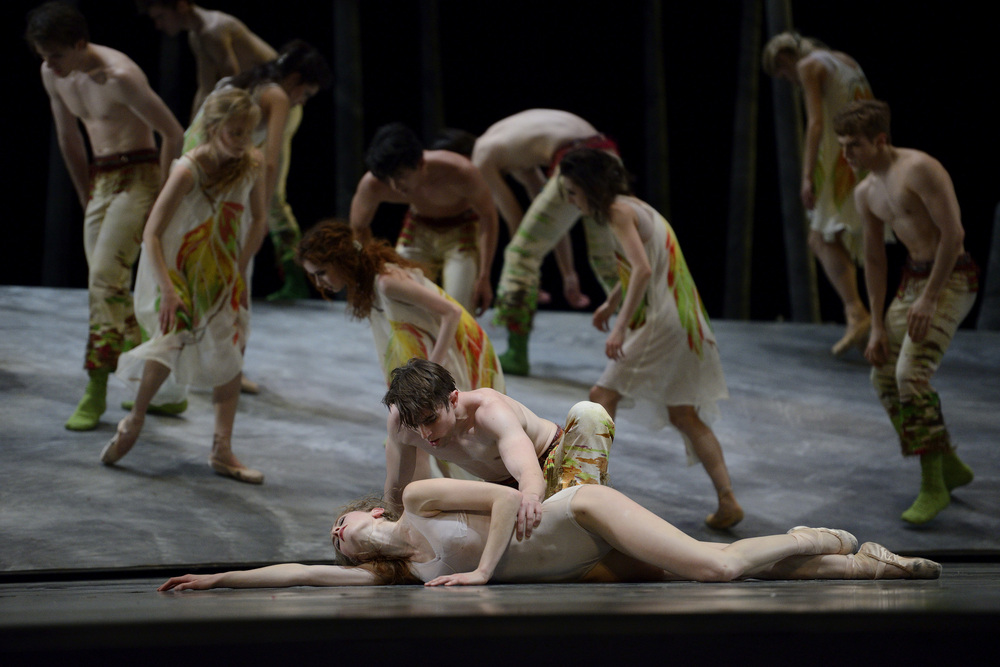 With tremendous assist from Stravinsky and the fine musicians in this company, Possokhov succeeds in conveying the evils of group-think and the pervasiveness of violence against women in a setting stripped of time and place. He makes stunning use of the women's pointe shoes -- their rapid stomps on quarter-pointe, for example, register consternation and displeasure with striking clarity. Many of his images -- like the Chosen One, physically depleted, strung up on four poles while the crowd shakes their fists in triumph -- are visually captivating and emotionally searing. Danced fearlessly by Dores André on Sunday afternoon, the Chosen One emerges as a complex character, not merely a faceless victim. The lone conceptual stumble is the portrayal of the Wise Elders by two cranky young men throwing toys out of their pram, hard to accept as wise or elder. Contrast this to the fearsome depiction of the Wise Elder in Nijinsky's production, as reconstructed by Kenneth Archer after designs by Nicholas Roerich:

San Francisco Ballet's contribution to the centennial celebration of Stravinsky and Nijinsky's controversial masterpiece may well prove to be a beacon in the storm.