The overarching title for the eight programs in San Francisco Ballet's new season is Infinite Worlds. The diversity of the works gives good reason for the term. The three evening-length story ballets include both Swan Lake, the renowned classical ballet set to Tchaikovsky's immortal score, and the North American premiere of Frankenstein, a dark, "mature audience" take on Mary Shelley's Gothic 1818 novel, by Liam Scarlett, the youngest choreographer to create a full-length dance for England's Royal Ballet. The third is Christopher Wheeldon's wonderful Cinderella, which you can read about here.

But you don't have to wait for those ballets to get a sense of this company's amazing range. Artistic director Helgi Tomasson has a special knack for diversity when planning the programs with three short ballets.

Take this season's first two offerings. Program One consists of "Haffner Symphony," a 1991 ballet by Tomasson to Mozart's beautiful Symphony No. 35 in D Major; "Fragile Vessels," a world premiere by Czech choreographer Jiří Bubeníček; and "In the Countenance of Kings," by the hot young dancemaker Justin Peck. (He's just 29 and already has created more than 30 ballets.) 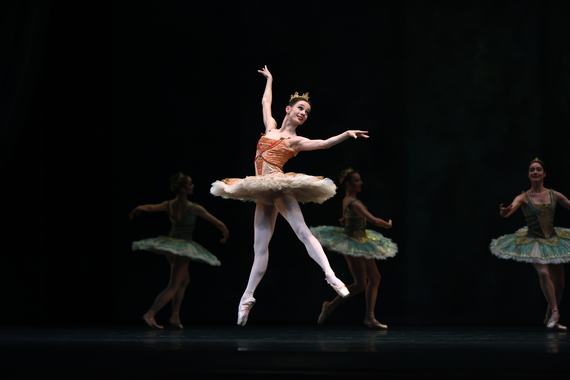 The "Haffner" is a neoclassical tutu ballet, whose elegant yet light-hearted pairings and sheer physicality let you know this isn't anything your nineteenth-century ballet companies would have danced. At a recent matinee, it was thrilling to see how well principal dancer Maria Kochetkova partnered with Angelo Greco, a young soloist new to the company, ably backed by several members of the corps.

Then came our first view of "Fragile Vessels." You almost can't miss with Rachmaninov's popular Piano Concerto No. 2, and the San Francisco Ballet orchestra, under principal conductor Martin West, sounded superb. (Mungunchimeg Buriad was the pianist.) Clearly inspired by the dancers in this company, Bubeníček has created a rousing, energetic, very demanding dance, against geometric gold-and-bone sets by his twin brother Otto (also a dancer), for them. Principal Dores André, whom we saw that afternoon, has said of the brothers, "They ask for a lot of things that are very, very hard to do. I don't think they realize how hard it is for the other humans in the room to accomplish those things...things I would have never tried." That includes bold stop-start movements, off-kilter balancing, and gorgeously complex lifts.

Of course, André was clearly up to the task, as were principal Joseph Walsh and soloist Wei Wang, who danced the second movement's intricate pas de trois with her. It tells you a lot about this company that the corps danced many of the same steps as the principals, and all made it look--not easy, but flowing, polished, almost effortless. Our audience gave them a standing ovation. 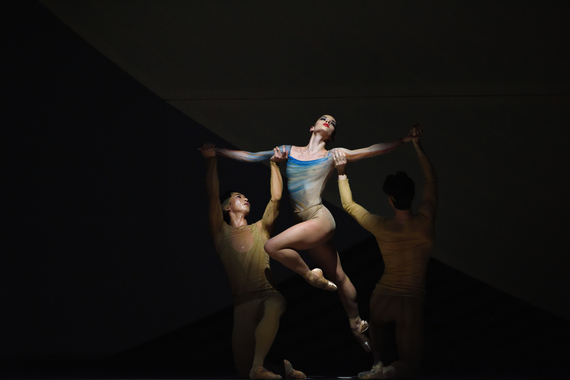 Two of the company's most exciting dancers, Walsh and André returned, with principals Luke Ingham and Frances Chung and soloists Jennifer Stahl and Daniel Deivison-Oliveira, for Peck's premiere from last year, which also was created for San Francisco Ballet. This is the third ballet for which Peck, a soloist and resident choreographer at the New York City Ballet, used music by the multi-instrumentalist singer-songwriter Sufjan Stevens, orchestrated by his frequent collaborator Michael P. Atkinson. Peck's dance, too, calls for high energy and impressive athleticism. At times, you felt you were almost holding your breath. 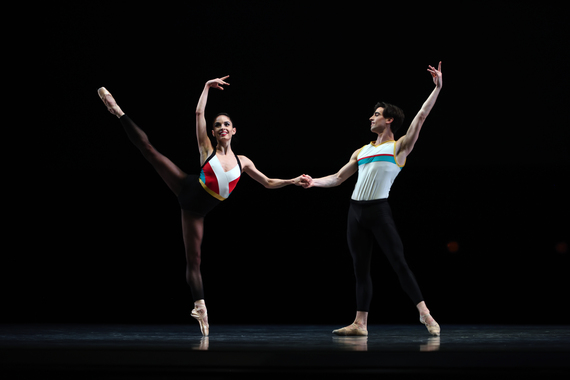 This program is properly named "The Joy of Dance." Program 2 is devoted to "Modern Masters," from William Forsythe and his thrilling, high-intensity "Pas/Parts" to Alexei Ratmansky and his "Seven Sonatas" to another world premiere by SF Ballet resident choreographer Yuri Possokhov, who never repeats himself and is always interesting. His latest, "Optimistic Tragedy," was inspired by the 1933 Russian play of that name as well as by Sergei Eisenstein's famous silent film Battleship Potemkin. Who wouldn't want to see that?