SAN FRANCISCO -- Like a lot of San Francisco bikers, the moment Josh Greenwald realized SFPD had stepped up their enforcement on cyclists was the also the very same moment he realized he was being pulled over.

"I was doing my normal route down Market into the office," he said. "While heading down Kearny, I was passing the intersection where Geary merges [and] the light was yellow...I passed three-quarters of the way through the light and it turned red. The motorcycle cop then pulled me over."

"[He was] totally unreasonable," Greenwald added. "It was pretty obvious he wasn't issuing any warnings and was looking to write a ticket."

Greenwald's experience has been an all too common one of late. Over the last few months, cyclists across the city have been getting pulled over at a rate far higher than any time in recent memory.

SoMa resident Dylan Haas had a similar experience, albeit with different policeman. "The officer who pulled me over was very apologetic throughout the entire situation," said Haas. "He was saying, 'We really don't like giving these tickets, I'm sorry.'"

The San Francisco Police Department insists there isn't a systematic crackdown on bicyclists going on. "There is no coordinated campaign," said Captain Dennis O'Leary of the department's Motorcycle Traffic Enforcement Company in a statement to The Huffington Post. "Most enforcement efforts regarding cycling violations are the product of complaints from the community."

Speaking at an event at the Commonwealth Club of California earlier this year, San Francisco Mayor Ed Lee said his office was working in a very deliberate way with SFPD to increase enforcement of vehicular safety issues at a number of problem intersections.

While SFPD doesn't keep track of the number of moving violations issued to cyclists, anecdotal evidence would suggest that, despite the department's assertions, the number of bikers being pulled over in the last few months has skyrocketed.

"I've definitely heard of more people than usual getting ticketed," said San Francisco Bike Coalition Executive Director Leah Shahum. "I've noticed that they've been stopping more bikes on Market and heard of a lot more activity along the Wiggle [bicycle route running from the Lower Haight into The Panhandle]."

SFPD officers have taken to setting up camp at the red light-protected pedestrian crosswalks along Market Street and pulling over any bikers neglecting to come to a full stop. They've also begun a similar practice at stop signs along the Wiggle.

THE RULES OF THE ROAD

In February, San Francisco Chronicle columnist C.W. Nevius set off a firestorm of controversy with a series of articles detailing SFPD's efforts to crack down on stop sign-running scofflaws along the celebrated bikeway.

Nevius, who admits to biking in the city with on a regular basis, said he was aghast at how infrequently cyclists came to a full stops at the route's frequent stop signs.

Bike advocate and Wigg Party founder Morgan Fitzgibbons argues that Nevius' perceived sense of lawlessness along the route is just as much the fault of motorists as it is of those who practice pedal power.

"We set up a video camera at the intersection of Waller and Steiner streets and it showed that the vast majority of bikers who use the route do slow down for pedestrians," he explained. "But at the same time, it was shocking for me to see how many cars don't stop completely at stop signs. People like to pretend cars follow all the rules, but they don't."

A perfect example is last week's altercation between a car and a bike on the Wiggle, during which a war of words quickly escalated into the motorist jumping out of the car and assaulting the biker.

Both Fitzgibbons and Shahum are a bit conflicted on the increased enforcement. While insisting the vast majority of riders in the city are highly responsible, they agree a small contingent of reckless cyclists still exists--and those individuals give everyone else a bad name.

"If this makes the five to ten percent of bikers who are rude behave better, we'll all for it," says Fitzgibbons. "I hate those people because they make my job harder."

However, Fitzgibbons argues that the recent enforcements practiced by SFPD sweep up far too many bikers safely making their daily commutes. "The only real way to deal with the issue is to change the law," he said, explaining that it would be smart to allow for a "rolling stops" system. In Idaho, for example, cyclists are allowed to treat stop signs as yields and pay a fine when they don't abide.

"Bikers can easily yield at stop signs and be completely safe," Fitzgibbons said. "It's already happening on the street every day; we've just got to codify it into law."

Shahum explains that the issue of Idaho rolling stops pops up every few years and, while a good idea, it would be impractical to actually implement because that sort of vehicle code regulation would have to come at the state level.

"We don't need a law to make a huge change. SFPD has the ability to prioritize enforcement and we're asking them to do that around dangerous and reckless behavior," she said. "We're not really seeing enforcement match the known danger areas and dangerous behaviors."

While the two intersections in the city with the highest number of bike accidents, (Market and Octavia, and Divisadero and Oak) fall along Market and the Wiggle respectively, they're not the particular portions of either route where SFPD seems to be cracking down the hardest. Other problem intersections--Market and Valencia, Mission and South Van Ness, Golden Gate and Jones, Fell and Masonic--seem to be largely escaping enforcement.

"The question is: how do we create a thoughtful enforcement approach based on data and not headlines," Shahum told said, referring to a pair of fatal high-profile cyclist vs. pedestrian accidents that generated a whirlwind of media attention over the past year. "We need to look at what really are the most dangerous intersections."

The Bike Coalition has encouraged SFPD to implement a bike ticket diversion program similar to the ones utilized in Marin and Sonoma counties. After receiving a ticket, offending cyclists then have the option to take a bike education class (much like the increasingly popular ones offered by the Coalition) instead of having to pay the full fine.

"You're not going to get everyone in a class, we know that," she said. "But if you do teach enough people to behave nicely, it becomes the norm and it'll affect the small, albeit visible, minority of bike riders whose actions give the rest of us a bad name."

SFPD says this shift, at least to a certain extent, has already started to occur. "There does appear to be more compliance by bicyclists with respect to traffic regulations," said O'Leary. "Perhaps recent collisions and media coverage of the traffic collisions and police follow up combined with enforcement has increased awareness of traffic safety."

Even so, it's important to put the entire debate about the safety of cyclists on city streets into context: Bike accidents are far less common than ones involving motorists.

"Bicyclists just don’t hit people very often; according to The City’s Department of Public Health, cars hit people 811 times in 2010, while bicyclists hit people just 18 times. And when they do, they don’t have the momentum to do the same level of damage," read a pro-biking editorial in the San Francisco Examiner. "Still, we get it. It’s a fascinating story, precisely because it doesn’t happen very often."

Check out this list of some of some of the best bike routes in the Bay Area. Just be careful not to get a ticket: 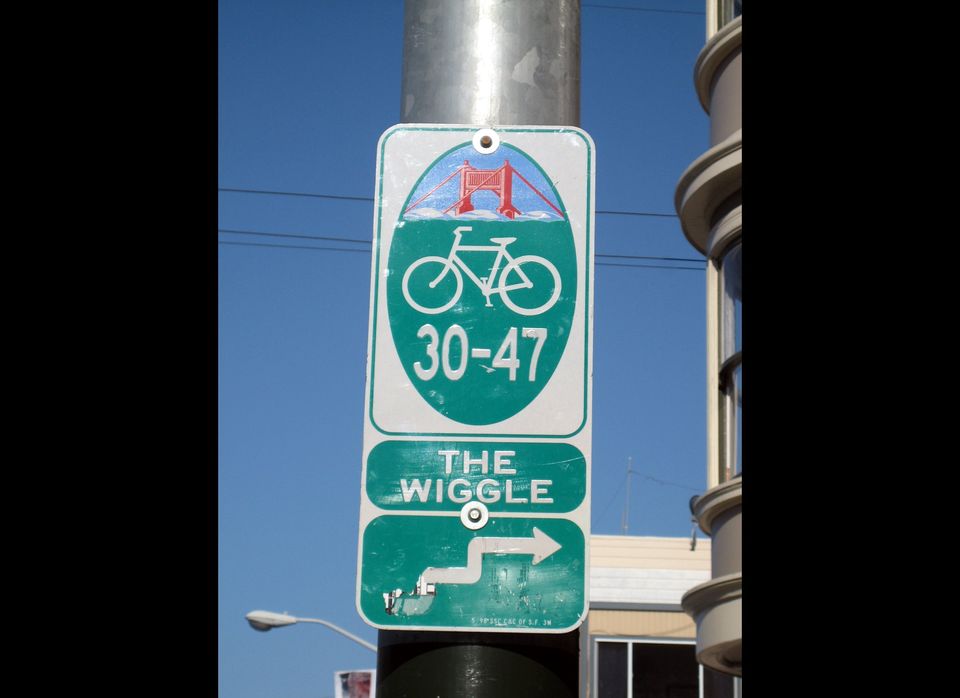 1 / 17
The Wiggle
The Wiggle is a one-mile bicycle route from Market Street to Golden Gate Park that minimizes hilly inclines for bicycle riders. The path generally follows the historical route of the Sans Souci Valley watercourse, winding through the Lower Haight neighborhood toward the Panhandle.
Flickr: canadianveggie