A group of Catholics in San Francisco is asking the pope to replace their archdiocese’s spiritual leader, Archbishop Salvatore Cordileone, with someone "true to our values."

More than 100 Catholics signed a full-page ad in Thursday’s San Francisco Chronicle asking Pope Francis to name a new church leader more closely aligned with San Francisco’s progressive ideals. In their open letter, the petitioners argue that Cordileone has “fostered an atmosphere of division and intolerance” and “isolated himself from our community.”

The letter follows months of protests against the archdiocese’s leadership. Frustrated local Catholics have spoken out, in particular, against Cordileone’s efforts to add language to the moral guidelines laid out for teachers at Catholic high schools that reaffirms the church’s stances on same-sex marriage, artificial insemination and other controversial matters. 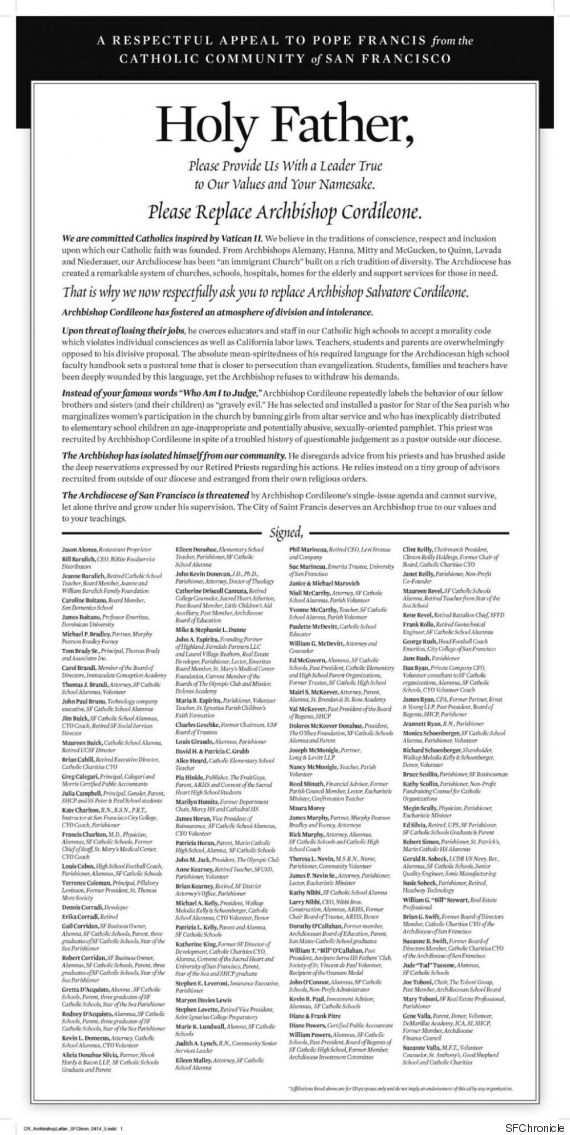 On Ash Wednesday in February, hundreds of students and parents, some with ashes streaked across their foreheads, gathered outside Saint Mary’s Cathedral in San Francisco to protest the harshly worded “morality clauses.” The students have also rallied around their teachers on social media with the hashtag #TeachAcceptance.

Thursday’s ad also criticizes the archbishop for installing a pastor at a local parish who has banned girls from serving at the altar.

“The City of Saint Francis deserves an Archbishop true to our values and to your teachings,” the ad reads.

The Archdiocese replied in a statement, released to The Huffington Post, that church officials are already talking about the issues raised in the ad. The Archdiocese also dismissed any notion that most San Francisco Catholics agree with the signers:

Larry Nibbi, a San Francisco business owner who signed the letter, said he is worried that the Archdiocese's efforts will drive Catholics away from their church.

"The crux of our worry is that the faithful are going to become very disenchanted and stop going to church because they don’t like the message, and the message is not the way they lead their lives,” Nibbi told SFGate.

James Martin, a Jesuit priest and editor at large of the Catholic magazine America, told HuffPost that although these types of grassroots campaigns have arisen before, they rarely have any influence on the Vatican.

"The decision to remove a bishop is made by the Vatican, specifically the Congregation of Bishops advising the Pope," Martin told HuffPost in an email. "The only time that a petition might influence the Vatican is if it seems that the bishop is unable to lead the diocese because of widespread opposition. But normally these campaigns do not serve to sway the Vatican. Sometimes they may have the opposite effect, and raise sympathy for a bishop -- that is, if he's seen to being 'attacked.'"