Q: You dedicated Smart on Crime to your mother, Shyamala G. Harris, calling her "the toughest, smartest and most loving person I have ever known." She died this year. Tell me about your relationship and why she inspired you.

My mother was and will always remain my greatest hero. She was a woman who gave herself to my sister and me unconditionally, and was the most inspiring and courageous person in my life. She was active in the Civil Rights Movement, where she met my father. My mother was also the consummate professional, a world-renowned breast cancer researcher and teacher whose work took her to universities all around the world. Despite her 5-foot stature, she had a commanding presence and a sharp wit, a keen sense of humor and endless depth of knowledge. 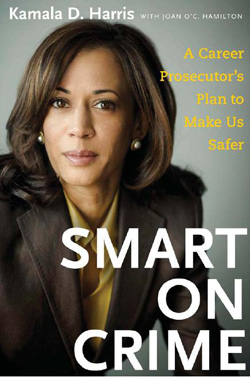 Q: What does it mean to be "smart on crime?" Are we not being smart now? Why and how does your book address this idea?

This book is predicated on one main premise, which is that all Americans have the right to live in safe communities. Having spent nearly two decades as a courtroom prosecutor, I know that it simply is not enough to just talk tough about crime. I want us to be what I call "smart on crime." That means in order to make our communities safer, we have to take a strategic approach to changing the status quo -- because our current system is failing all of us.
In the book, I first address some of the myths and outdated approaches that I believe are failing. In the second half of the book, I outline the ways in which I believe we can chart a new course for tackling these long-standing problems. My hope is that this book helps to elevate the discussion of how we as a state and nation approach the criminal justice system. I believe it is absolutely possible for us to create a future with safer streets, lower re-offense rates, and a better-educated workforce.


Q: In the book, you talk about how important it is to look at the criminal justice system through economic eyes. In a time of extremely limited public resources, how do we justify allocating those resources to anything other than investigating crimes and prosecuting criminals, especially violent crimes?

Getting smart on crime does not mean reducing sentences or punishments for crimes. It does mean using the time and resources we now spend on offenders more productively to reduce their odds of re-offending. Remember, for decades we have spent billions of dollars on ineffective solutions that have not improved public safety. I believe that especially in these tough economic times, it is critical that we evaluate the cost of action versus the cost of inaction. I strongly believe that for serious and violent criminals, we must absolutely hold them accountable for their crimes and send them to prison. But as I discuss in the book, we must take a smarter approach when it comes to combating nonviolent crime. And it is also essential that when we look at investing in innovative ways to fight crime before it occurs, we must weigh the short-term costs of action versus the long-term costs of inaction.


Q: Can you please explain the "crime pyramid" and what it reveals about the weaknesses in crime prevention? Why are our harsh sentences not deterring some kinds of crimes?

I have found that the "crime pyramid" is an effective way to visualize the totality of crimes committed in our society, and an effective way to communicate about how we can best fight crime -- because as you know "crime" is not monolithic. Visualizing this pyramid, at the top are the very worst crimes: murder, rape, violent assaults, crimes that so rightly command our attention. While these crimes are so horrific and threatening, they form the very top of the pyramid because they constitute the minority of crimes. Did you know that only one fourth of all offenders sentenced to prison are violent offenders?

One of the main reasons we haven't been able to effectively prevent nonviolent crime is that we have been using only the tools best suited to combating the offenders at the top of the pyramid. For several decades, the passage of tough laws and long sentences has created an illusion in the public's mind that public safety is best served when we treat all offenders pretty much the same way: arrest, convict, imprison, parole, and hope they learn their lesson. But the numbers paint the true story, which is that most nonviolent offenders are learning the wrong lesson, and in many cases, they are becoming more hardened criminals during their imprisonment.


Q: In Smart on Crime, you take aim at several myths about crime, including that the only thing the criminal justice system and education have in common is that they both need reform. Why do you believe that fighting truancy might be the most significant step we can take in crime prevention?

I believe that a child going without an education is a crime. As San Francisco District Attorney, I have seen firsthand what too frequently happens to habitually and chronically truant school kids: young lives are lost to street violence or prison at an appalling rate, our state loses more resources and our communities are less safe. A recent report from UC Santa Barbara concluded that high school dropouts account for a disproportionate amount of juvenile crime, crimes that cost the state of California $1.1 billion every year. Add in social and medical costs, lost income taxes, and associated economic losses, and the report estimates that dropouts cost the state more than $24 billion per year.

The warning bells keep on ringing. In California, two-thirds of prison inmates are high school dropouts. I believe that this is one of those critical issues where we can either pay attention now, or pay the price later.


Q: You are very proud of "Back on Track," a re-entry program that you started out of the San Francisco DA's office in 2005. How does it fit into your Smart on Crime ideas?

The old approach to fighting crime is well-known. Police and prosecutors are deluged with low-level drug cases, and the public spends billions on prisons to house these offenders. And, every year, prisons release hundreds of thousands of these offenders back into our communities. They have no plan, no skills, nowhere to go, and they pick up right where they left off. Within three years of release, 70 percent of California prisoners will re-offend and return to prison.

That is why in 2005, I created an initiative called Back On Track. Back on Track is a reentry program designed for nonviolent, first-time drug offenders. These are young people who are mostly in their early 20's, have no prior criminal records and were caught for low-level drug offenses. None of their cases involves gangs, guns, or weapons.

We give them a choice: they can go through a tough, year-long program that will require them to get educated, stay employed, be responsible parents, drug test, and transition to a crime-free life, or they can go to jail. Those who choose Back On Track plead guilty to their crime, and their sentence is deferred while they appear before a judge every two weeks for about a year. They must obtain a high-school-equivalency diploma and hold down a steady job. Fathers need to remain in good standing on their child-support payments, and everyone has to take parenting classes. For people who hit all of these milestones, the felony charge is going to be cleared from their records.

The results speak for the wisdom of investing in reentry programs. For this population, the recidivism (or re-offense rate) is typically 50 percent or higher. Four years into this initiative, recidivism has been less than 10 percent among Back On Track participants. And the program costs only $5,000 per person, compared to over $35,000 a year for county jail. That saves our city roughly $1 million per year in jail costs alone. When you add in the total expense of criminal prosecutions to taxpayers, including court costs, public defenders, state prison, and probation, the savings are closer to $2 million. And we cannot even begin to quantify the value of these individuals' future productivity, taxes and child support payments, or the brightened prospects for their families.

That is why both Governor Schwarzenegger and the US Department of Justice have recognized Back on Track as a model for both our state and nation.