With the 2012 Presidential election drawing closer by the day, it's a lucky thing satirists and comedians are around to let the hot air out of the most misguided campaign balloons. Whether one watches video skits created for Funny or Die, The Daily Show With Jon Stewart and The Colbert Report, or reads some of the brilliant satire created for The Onion, The Borowitz Report, The Daily Currant, and Freewood Post: News That's Almost Reliable, the news is being chewed up and spat out with remarkable dexterity.

Newcomers continue to impress with their ingenuity. Consider the song stylings of Jeremy Berrick Gotch, Sandy and Richard Riccardi:

Spencer Blackhart was "campaigning" down at the 2012 San Francisco Fringe Festival this month in his usual state of nervous agitation. For those unfamiliar with Berkeley's reptilian pseudo politician, Blackhart explains on his Facebook page that:

I am the man of a thousand faces, all of them dashingly handsome, and almost suspiciously presidential.

I am the man of a thousand words, to be arranged in the order that is pleasing to you and your views.

I am the man of a thousand values, each one more highly valued than the one previous.

I am the man of a thousand hands, reaching out, connecting, groping the waiting . . . hands of voters.

I am Spencer Blackhart. And I am what America needs.

A man with Ponzi scheme experience that can guarantee China will end up holding the bill.

A man who knows our prison system in and out, and can use his great experience to keep you and your family safe.

A man whose past drug experiences virtually guarantee that, at some point, he has seen things your way.

I am a man who is ready to tackle the hard issues of today:

To protect the money you will one day have against the poor people who look different from you.

To make America look strong the way only a man familiar with prison weight rooms can understand.

I am a man who knows outside-the-box thinking is necessary. I tell you now, I am never going back in there."

Like Dorothy Gale wandering around in the magical land of Oz, it's tempting to ask some of these performers:

The answers to such questions came into stark focus down at the EXIT Theatre last month.

Under the artistic direction of Nathaniel Justiniano and Ross Travis, Naked Empire Bouffon has been developing a theatrical style that builds on a solid foundation of lewd, crude, and rude shenanigans reaching as far back in time as the Commedia dell'arte. Their dramatic goal is to combine social activism with physically grotesque satire. Inspired by such take-no-prisoners comic geniuses as Sacha Baron Cohen, Matt Stone, and Trey Parker, their acutely confrontational performance style makes the San Francisco Mime Troupe look like a bunch of old biddies gathering for afternoon tea. Lewis Black might end up sounding like a pussy.

In the following clip, Justiniano describes what actors participating in his workshops can anticipate:

The world premiere of You Killed Hamlet, or Guilty Creatures Sitting At A Play rests on the dramatic premise that nothing -- neither death nor Hamlet -- is sacred. Surprisingly, much of the play's inspiration came from watching Brené Brown's popular TEDTalk speeches about vulnerability and shame.

As one enters the theatre, an emaciated fool named Shreds (Travis) and a 350-pound monstrosity named Patches (Justiniano) stand by the door, greeting theatregoers with the snarky warmth of Halloween trick-and-treaters. Before the show begins, Shreds and Patches mingle with the audience, chatting people up, insulting them, and generally setting the stage for an hour's worth of mirth and mayhem.

Once You Killed Hamlet, or Guilty Creatures Sitting at a Play gets under way, they drag Hamlet's dead body (a stuffed dummy) onto the stage and proceed to kick and beat the shit out of it in an attempt to help their audience let go of its fear of death. It soon becomes apparent that Shreds and Patches may very well be the bastard love children of Beavis and Butt-head and Patsy and Edina (from Absolutely Fabulous).

Whether sitting on Hamlet's face or waving their grotesque cloth phalluses at the audience, nothing is too rude or scatological for these two "anti-clowns." You Killed Hamlet, or Guilty Creatures Sitting at a Play is the kind of theatrical event which good friends tell each other "You just had to be there." Be sure to take a close look at the trailer's final credits:

It's rare for me to become totally disenchanted with a performer who has put a tremendous amount of creativity into a one-woman show. But as I sat watching R. Sky Palkowitz (who bills herself as The Delusional Diva) perform Calling America: Don't Hang Up! and feeling very much like a captive audience, I found myself wishing for the old days of The Gong Show when a stage manager could stop a performer's severely misguided act before she had a chance to run out the clock.

Palkowitz bills her show as "a solo, transmedia tour-de-force centering on society's quest for humanity as told through poetry, politics, and personalities."

Don't get me wrong: Sky (who describes herself as an avant-garde, multimedia performance artist, performer, and director) obviously has talent with accents and characterization. She's created an army of characters and written some very interesting scenes for them.

What she hasn't learned is when to stop. There was enough material for three shows crammed into her performance at the Fringe festival. Not all of it was stageworthy.

I tend to be wary of performers who start their show self-referentially as a character seated in the audience, loudly telling everybody about how wonderful the performer is (talk about being a legend in your own mind!). By the 37-minute mark in Palkowitz's monologue, I was suffering from overkill.

Calling America: Don't Hang Up! lasts 90 minutes (by which time Palkowitz has not only stripped naked and tried to shove a toy gun into her crotch but still has plenty she wants to "share"). This is an artist who is either petulantly unwilling or intellectually incapable of editing her work.

Have you ever tried to end a phone conversation with someone who refuses to stop speaking? I'm not talking about the kind of person who teases you with the old "No, I love you more" routine, but someone who is so in love with the sound of her own voice that she simply can't let go of a chance to be the center of attention?

Between trying on too many costumes, impersonating too many characters, and then insisting on conducting post-show chitchat with an audience that had already gotten much more than they'd ever bargained for, Palkowitz delivered a master class in the rule that "less is more." Here's a sample of her act:

One of the most joyous presentations seen at this year's San Francisco Fringe Festival was given by the delightful PI Physical Comedy Troupe with their production of The Good, The Bad, and The Stupid. 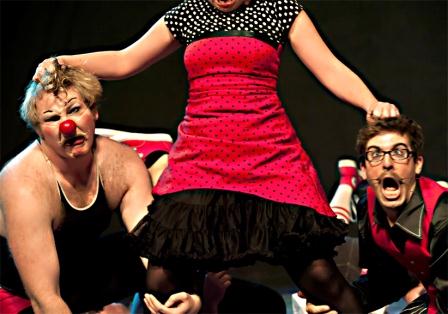 A supremely gifted group of comedians, the PI clowns know how to keep audiences involved and entertained. Whether using hobby horses to re-enact a cowboy brawl in slow motion or showing off their formidable acrobatic and juggling skills, this is a tight-knit ensemble that aims to please.

On the night I attended The Good, The Bad, and the Stupid, I was one of the audience members dragged up onstage to be a "volunteer." While it was lots of fun, I was more intrigued when the clowns turned their attention to some serious juggling.

Long hours of practice teach a performer how to make a mistake -- or even fail -- onstage and quickly recover without a lot of self-inflicted emotional trauma. As Ira Gershwin wrote:

In the following video clip, you can watch the members of the PI Physical Comedy Troupe rehearsing their stunts and shtick. Next time you have a chance to see them in action, you'll want to purchase tickets as soon as they go on sale. The Good, The Bad, and the Stupid is an hour of pure silliness and inspired joy!