SAN FRANCISCO -- Dozens of gay couples waited excitedly Saturday outside of San Francisco's City Hall as clerks resumed issuing same-sex marriage licenses, one day after a federal appeals court cleared the way for the state of California to immediately lift a 4 1/2 year freeze.

Big crowds were expected from across the state as long lines had already stretched down the lobby shortly after 9 a.m. City officials decided to hold weekend hours and let couples tie the knot as San Francisco is also celebrating its annual Pride weekend expected to draw as many as 1 million people.

Petra Torri, 32, and Antoinette Torri, 31, said they left their Sonoma home at 5 a.m. Saturday so they could be the first couple in line when the doors to City Hall opened.

The couple, who has been registered as domestic partners in California for a year and had a commitment ceremony last summer, called relatives Friday night and asked to meet them at City Hall. They wanted to get married in the off chance that the courts suddenly put a halt to the weddings.

"You have the feeling in your mind they're going to take it away on Monday, so it's like, `Let's go!'" Petra Torri said.

Also in line Saturday was Scott Kehoe, 34, and his fiancee, Aurelien Bricker, 24. After finding out on Facebook that the city was issuing same-sex marriage licenses Friday, the San Francisco couple rushed out to Tiffany's to buy wedding rings.

"We were afraid of further legal challenges in the state," Kehoe said.

Bricker, who is a French citizen living in the United States on a student visa, said he will now be able to have his soon-to-be husband sponsor him for U.S. citizenship.

The couple contemplated moving to France as Bricker's visa is scheduled to expire next year.

San Francisco officials said that 81 same-sex couples wed on Friday just hours after the 9th U.S. Circuit Court of Appeals issued a brief order saying it has dissolved a stay it imposed on gay marriages while a lawsuit challenging the state's voter-approved ban on such unions worked its way through the courts.

Within hours of the appeals court's action Friday, the two lead plaintiffs who in 2009 sued to overturn Proposition 8, Kristin Perry and Sandra Stier of Berkeley, became the first couple to marry in San Francisco in a hastily arranged ceremony. State Attorney General Kamala Harris declared them "spouses for life."

The two other plaintiffs in the Supreme Court case, Paul Katami and Jeff Zarillo, were married in Los Angeles City Hall with Mayor Antonio Villaraigosa presiding. 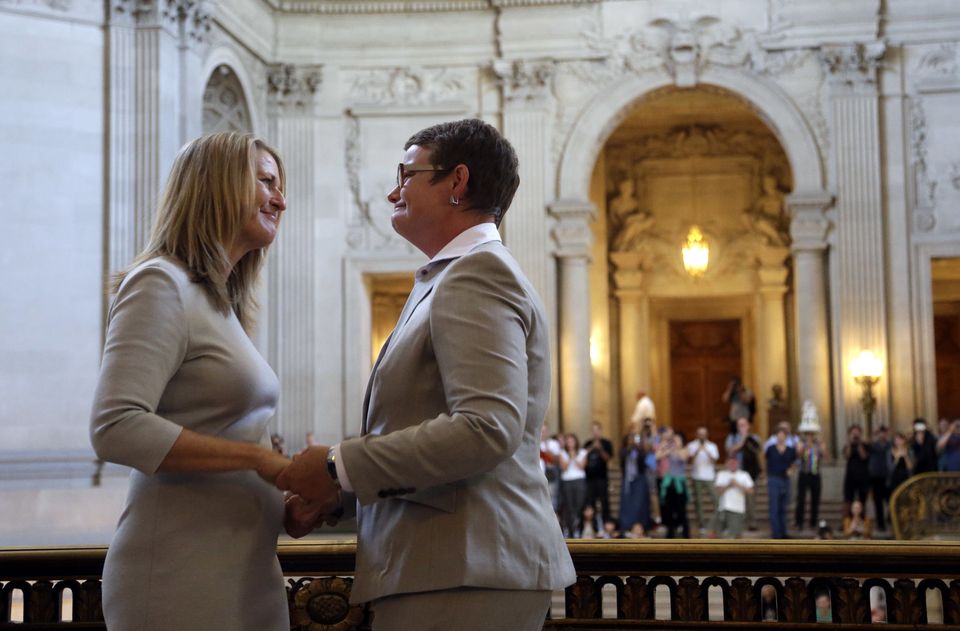