Passion was in the air this week as San Francisco Gay Men's Chorus ushered in the spring with their concert series Passion on Wednesday and Thursday at Davies Symphony Hall.

The show opened with a profound piece, "How Can I keep From Singing" by Robert Wadsworth. The piece was first published in 1868. However, in April 2015 when states like Indiana are passing Religious Freedom legislation lyrics that included "When tyrants tremble, sick with fear, and hear their death-knell ringing...How can I keep from singing?" were uncanny.

The show presented a selection of extraordinary new works, taking audiences on a voyage across three centuries, and sharing stories of passion as only music can express. Starring the 275 men of the chorus, Passion included the San Francisco premiere of Jake Heggie's choral opera For a Look or a Touch, and the world premieres of #twitterlieder: 15 Tweets in 3 Acts, by com-poser James Eakin and librettist Charles Silvestri, and My Friend, My Lover: Five Walt Whitman Songs by Steve Huffines.

The shows highlight was the collaboration with the San Francisco Opera, American Conservatory Theater and the Contemporary Jewish Museum, in the Bay Area premiere of the choral opera, For a Look or a Touch by Jake Heggie. Commissioned by Music of Remembrance, the piece examines the often-overlooked persecution of gays in Germany during the Holocaust, at a time of moral and historical importance. Special guest stars, operatic baritone Morgan Smith (San Francisco Opera's Moby-Dick) and actor Kip Niven who delivered exquisite, heartfelt performances.

Other chorus world premieres included composer James Eakin and librettist Charles Anthony Silvestri's #twitterlieder: 15 Acts in 3 Tweets and the world premiere of Steve Huffines' My Friend, My Lover: Five Walt Whitman Songs, drawing from Whitman's brilliant and subversive works of the 1800s, revealing a passion that dared not to be expressed. 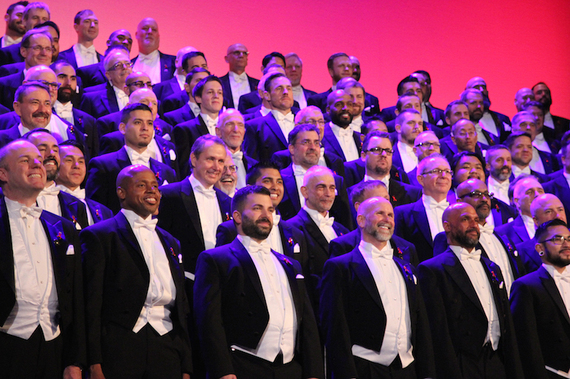 SFGMC ushers in the spring with great Passion

For nearly 40 years, the San Francisco Gay Men's Chorus has courageously served as the international standard bearer for a powerful and accomplished mix of high-caliber performance, human rights, community activism, empowerment and inclusiveness, establishing it as an icon among LGBT organizations. Founded in 1978, it was the first organization of its kind and is credited with starting the LGBT choral movement, galvanizing and changing the course of LGBT history. It continues to rally and inspire other arts-based community organizations around the world. Under the leadership of Artistic Director and Conductor Dr. Timothy Seelig, SFGMC has in recent seasons established a heightened level of performance standards receiving audience and choral acclaim, increased its touring and recording profile and broadened its impact and reputation in the community while maintaining its signature blend of humor, personality and high-voltage performances.