SAN FRANCISCO -- With the country reeling from the unimaginable violence at Sandy Hook Elementary School in Newtown, Conn., cities and states across America are reflecting upon the damage guns have done in their own communities.

In the San Francisco Bay Area's biggest cities--San Francisco, Oakland and San Jose--the number of gun-related crimes have increased over the past decade, in some cases dramatically, according to data collected by the Federal Bureau of Investigation.

(SCROLL DOWN TO SHARE YOUR OWN STORIES ABOUT GUN VIOLENCE)

Across the board, the area saw a spike in gun crimes between 2006 and 2008, after which rates began to fall.

Despite the recent increase, cities in the Bay Area have enacted some of the strongest gun control legislation of anywhere in the country. The San Francisco-based Law Center to Prevent Gun Violence rates California as having the strongest gun laws of any state and notes that, among California cities, San Francisco and Oakland have some of the tightest rules anywhere.

San Francisco has some of the most restrictive safe storage regulations of any municipality in the United States, largely targeted at keeping guns out of the hands of children. Within the past year, the city passed a strong law regulating ammunition sales.

"Almost all the good laws you can pass on this have already been passed in cities like San Francisco and Oakland," explained Robyn Thomas, the LCPV's executive director, to The Huffington Post. "But there's only so much a city can do to prevent the flow of guns from coming in."

Thomas noted that, while states with strong guns laws tend not export a large number of guns to neighboring jurisdictions, the flow from states with weak regulation is significantly stronger. "A lot of the illegal guns used in crimes in San Francisco and Oakland are coming from states without the same level of gun laws like Nevada and New Mexico," she said.

Of the ten states LCPV rates as having the strongest gun laws, seven of them (California included) also have the lowest per capita rates of gun-related fatalities.

In California, all gun sales require a background check and must go through a licensed dealer; all gun dealers have to be licensed by the state; handgun owners need a special license and to pass a written test; gun shows are tightly regulated; handgun purchases are limited to one per month; there is a 10-day waiting period for the sale or transfer of a firearm; all firearm sales are recorded; local law enforcement can prevent someone from getting a permit to carry a concealed weapon; and, in 2007, California became the first state to require micro-stamping, which allows police to match a bullet with a database of all the guns legally sold in the state.

However, this doesn't mean that Golden State hasn't taken some steps backward in the eyes of gun-control advocates. Recently, California Governor Jerry Brown vetoed laws that would have enacted mandatory reporting of all lost and stolen guns within 48 hours, prevented the transfer of firearms from law enforcement officers to civilians and expanded the state's negligent storage law to cover BB guns.

While much of San Francisco's efforts to enact stronger gun control legislation comes from the city's reputation as a bastion of liberalism, a significant amount of energy directed toward pushing these laws comes from a single tragic event: the shooting at 101 California Street.

In 1993, 55-year-old failed entrepreneur Gian Luigi Ferri walked into the law offices of Pettit & Martin on the 34th floor of 101 California Street and opened fire. Ferri managed to kill eight people and injured six more before committing suicide as police surrounded him.

In the wake of the tragedy, California lawmakers repealed a state law that specifically shielded gun companies from lawsuits.

Additionally, the incident prompted Senator Dianne Feinstein (D-Calif.) to introduce a national ban on assault weapons the following year. While that ban has since expired, the reaction to the Sandy Hook shooting has sparked Feinstein to pledge she will re-introduce the legislation on the the first day of the upcoming congressional session.

White House spokesman Jay Carney said during a Friday press conference that renewing the ban was a "commitment" for President Obama.

Politicians and anti-gun activists aren't the only individuals pushed to action by mass shootings. A recent poll of Bay Area residents taken after the Newtown massacre found that nearly three-quarters of respondents thought gun control laws should be made more restrictive.

A gun buyback program jointly operated by the San Francisco and Oakland police departments saw huge crowds of people looking to trade in their guns for cash this past weekend, many of whom said they were motivated by the recent events in Connecticut.

A woman named Jean-Margaret Strauss was one of the first in line. She said the shooting in Newtown helped motivate her to turn in three guns that used to be her father's. She said her guns weren't jeopardizing anyone, but turning them in was a way to honor her family history. She said she kept her dad's holster and plans to put gardening tools in it. "I don't have to keep a hold of the guns," Strauss said.

Bay Area readers, have you had your own experiences with gun violence? Email your stories to openreporting@huffingtonpost.com.

Take a look at other high-profile Bay Area shootings over recent decades: 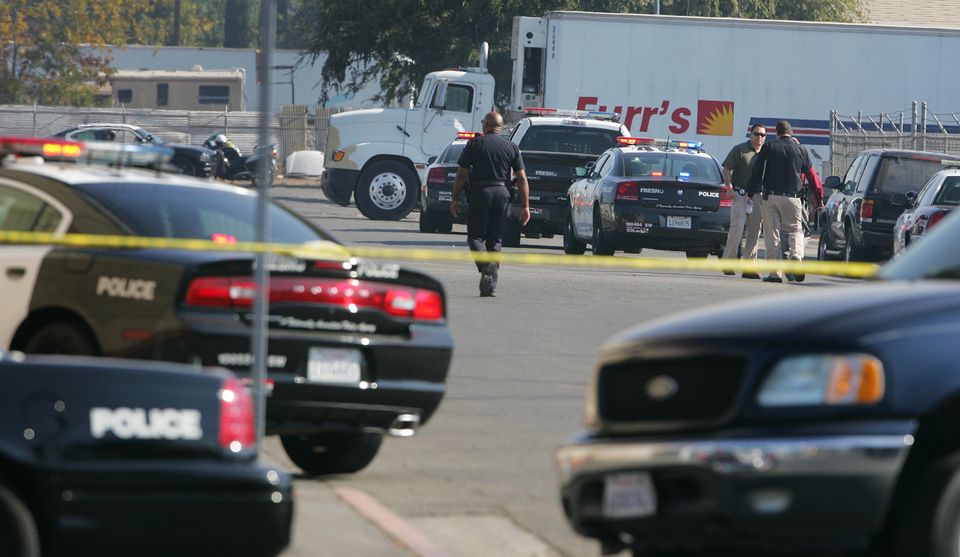 1 / 7
Apple Valley Farms -- 11/6/12
On Election Day 2012, Lawrence Jones, a 42-year old employee of the Apple Valley Farms meat processing plant in Fresno, California, started shooting at his workplace. Jones shot five of his co-workers, two of them fatally, before turning the gun on himself.
AP